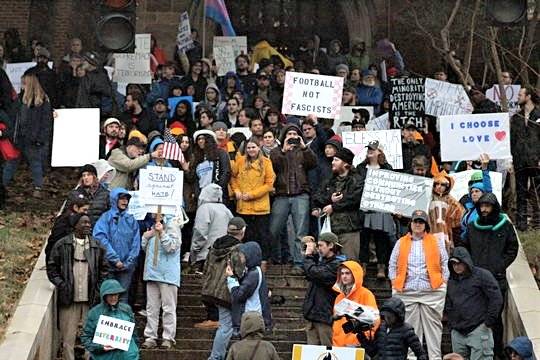 Knoxville, Tenn. — More than 200 people marched in a cold rain at the University of Tennessee, Knoxville campus on Feb. 17 to protest a gathering of the fascist “Traditionalist Worker” Party.

Those protesting the white nationalist gathering vastly outnumbered the 45 fascists. As more than 200 law enforcement agents stood by, many of the anti-fascist protesters shouted, “Who do you protect?”

Many of those protesting refused to confine themselves to a “secure demonstration area” set up by police. But police kept protesters from directly confronting the fascists in a parking garage near the campus.

University of Tennessee officials have said they did not invite the fascist group to campus and claimed they were helpless to stop the gathering.

This is the third time since August that white nationalist or fascist forces have come to Knoxville for rallies, only to be vastly outnumbered by residents of the area and region telling them they are not welcome.

The first was in August 2017, when a group of about 30 fascists held a rally at a Confederate monument. About 3,000 anti-fascists showed up to confront them.

The second was on the day of the Women’s March in January, in which about 14,000 people took part. Less than 20 fascists held a “counterprotest” while being protected by police.