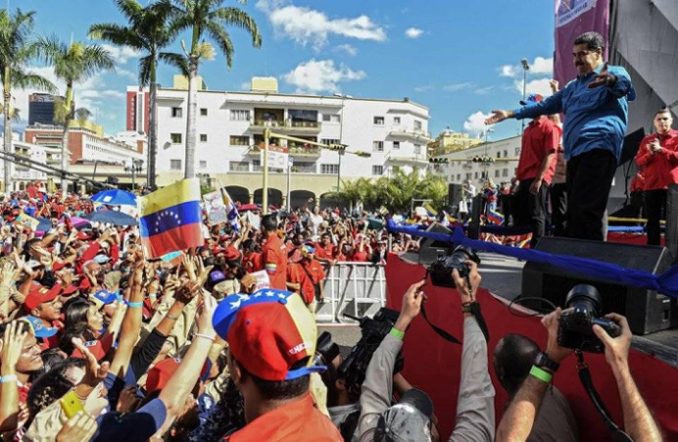 Venezuelan President Nicolás Maduro greeting supporters during a rally in Caracas on January 23, 2018.

On Feb. 7, Maduro said that Venezuela would go ahead with presidential elections scheduled for April 22.

At an international news conference on Feb. 15, Maduro answered U.S. Secretary of State (and former CEO of ExxonMobil) Rex Tillerson’s threatened embargo of Venezuelan petroleum by saying that Venezuela would be able to ship oil to other customers.

In January, Adm. Kurt Tidd, the new head of the Pentagon’s war machine in the Americas known as Southcom, visited Colombia. His task was to line up that country’s armed forces for any possible U.S. intervention in the region.

Tillerson visited Mexico, Argentina, Colombia, Peru and Jamaica, with the main goal of making sure these regimes would side with Washington against Bolivarian Venezuela. In Mexico, Tillerson openly called upon the Venezuelan armed forces to carry out a coup against the elected government. Even the rightist Mexican government had to distance itself from his threats.

Following Tillerson’s visit to Colombia, that U.S. client state increased the number of Colombian troops near the Venezuelan border.

Under pressure from imperialism to postpone the elections, the Maduro government has chosen to defend Venezuela’s sovereign right to decide the timing. The amount of organized popular resistance to imperialism, including that within the Venezuelan military and from international solidarity, will determine the outcome of this struggle.

Bolivarian forces made gains in 2017

Elections to the Constituent Assembly on July 30 created a popular government organ, defying the Venezuelan oligarchy and the imperialists. Later, in the fall, local elections ended in an overwhelming victory for the government party — the United Socialist Party of Venezuela (PSUV) — and other parties supporting Bolivarian structures.

These two elections reversed an earlier election, that of December 2015 for  the National Assembly in which opposition parties had gained a majority. The two 2017 elections established once more the authority of the political forces who are Chávez’s successors, including Maduro.

The U.S. corporate media attacked the Venezuelan government by reporting that 130 people were killed in anti-government demonstrations last year. That completely distorts the fact that fascist gangs killed pro-government people; most of the fatalities were government supporters.

Rightist opposition parties and political leaders were discredited after they organized violent demonstrations that killed revolutionaries, popularly known as “Chavistas,” and even carried out racist burnings of Black and Brown Venezuelans.

Two ultrarightist figures, Leopoldo López and Henrique Capriles, have been barred from running for president because they urged or organized violent actions against the government.

At this time Maduro is favored to win the presidential election, although there is no guarantee. The right-wing opposition is divided and disorganized. U.S. imperialism has demanded the elections be postponed — they want time to unite effective opposition.

The Maduro government and the most prominent opposition groups have been negotiating ground rules for the elections in Santo Domingo, capital of the Dominican Republic. The mediator for the talks was former Spanish President José Luis Rodríguez Zapatero, who is no friend of the Maduro government.

On Feb. 6, according to the article “U.S. promotes a coup against Venezuela” published Feb. 17 in lahaine.org, opposition negotiators were about to sign an agreement that set the time and rules for the election. Then Tillerson, who was in Bogotá, called opposition negotiator Julio Borges and demanded he reject the pact, which he did. Zapatero was then visibly angry that Borges had pulled a double-cross.

Faced with the opposition’s last-minute submission to U.S. imperialism, it is only reasonable that Maduro and his government decided to go forward with the elections and to sign the pact already agreed upon, even though the opposition didn’t sign it.

Recent actions by U.S. imperialism and its clients south of the border — from the stolen election in Honduras to the use of judicial offensives against popular politicians in Brazil and Ecuador — show that winning an election does not guarantee that a popular government stays in office. More important is that the oppressed classes are organized and have the means to defend their interests.

For anti-imperialists in the U.S., it is more important than ever to expose the attempts of the imperialists and their media to demonize political leaders south of the U.S. border.

In this specific case it will be essential to demand that the U.S. keep its hands as well as its military, along with those of its client states like Colombia, off Venezuela.