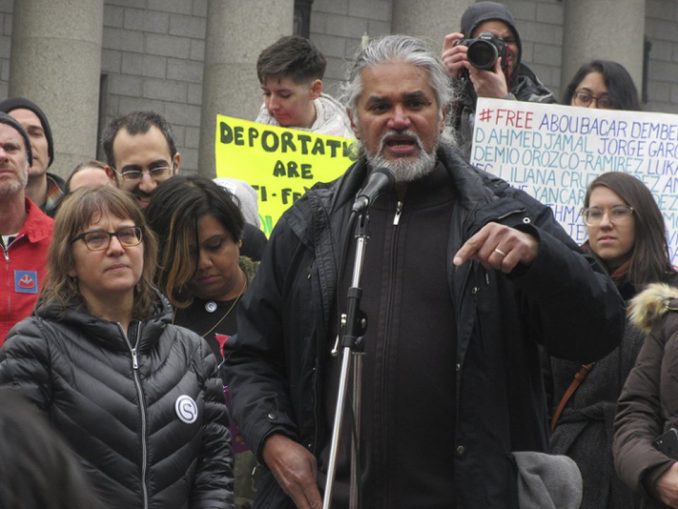 Ravi Ragbir speaking at a rally outside the Manhattan Immigration and Customs Enforcement (ICE) office.

Within hours before a scheduled deportation on Feb. 9, immigrant rights organizer Ravi Ragbir won a temporary stay of removal on First Amendment grounds. Ragbir, who has lived for 27 years in the United States, said, “Like so many people who are living in this country under the threat of deportation, I know how important it is to raise our voices against the injustices in the system.”

Some 500 immigrant rights supporters had just raised their voices, rallying in the early morning outside the Manhattan Immigration and Customs Enforcement (ICE) offices to cheer speakers brought out by the New Sanctuary Coalition. Speakers included religious, political and legal representatives as well as multinational community leaders, who defend their Muslim, Latinx, Haitian, Asian and African communities. All here joined the cry, “The movement united will never be deported!”

Ragbir’s new suit charges the Trump administration and ICE officials with “selectively enforcing the immigration laws against immigration rights activists on the basis of their protected speech.”

Ragbir — from Trinidad and Tobago — is co-director of the New Sanctuary Coalition along with Jean Montrevil of Haiti. Montrevil was deported to Haiti on Jan. 3 after being seized as he was on his way to work in Queens, N.Y. Montrevil’s ex-spouse Jani Cauthen spoke at a rally the next day of the pain and strength of their children, whom ICE is forcing to live apart from their father. Montrevil has a legal date with ICE in April.

Many of today’s rally messages reflected on how the laws against immigrants are racist. With speakers demanding support and justice for DACA (Deferred Action for Childhood Arrivals) youth and defense for all needing a protected extended stay, with fair immigration laws and sanctuary for all and an end to family separations.

Ragbir has a follow up court ruling that is expected by mid-March. As he spoke of the growth of the faith-based sanctuary movement, he said, “Injustice anywhere is a threat to justice everywhere. We are interwoven. This is an explosion of love!”