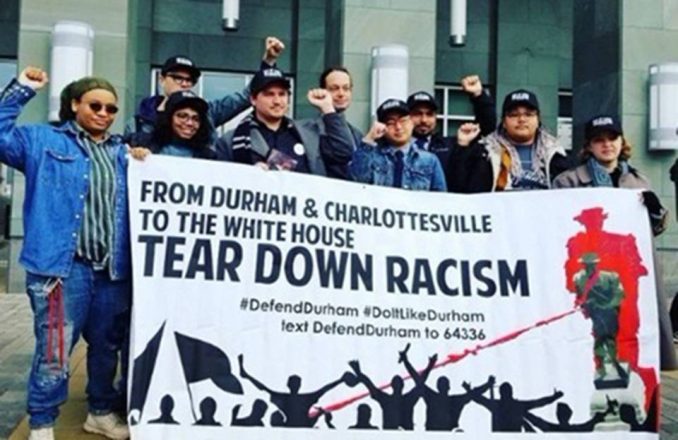 UPDATE: On Feb. 20, the Durham district attorney announced that all charges have been dropped against all the Durham defendants, including five who were to have gone to trial on April 2.

People power won the day here on Feb. 19, as three anti-racist activists went to trial on charges stemming from the toppling of a Confederate monument on Aug. 14. The three beat the charges.

The trial was held six months after righteous action by the people of Durham brought down the monument.

After months of political pressure, the state decided to break the trials against the eight freedom fighters into separate proceedings.

Felony riot charges the eight had faced were dropped last month, thanks to pressure and solidarity from the anti-racist movement around the country.

Instead, the people’s movement against white supremacy and in support of these anti-racist fighters emerged victorious. Raul Jimenez was acquitted of all charges. The charges against Dante Strobino and Peter Gilbert were dismissed outright.

“Today is a small victory,” said Raul Jimenez at the rally after the trials ended. “Two of us had our charges dismissed, and I was found not guilty. This is a reminder that tearing down monuments to white supremacy is not a crime! It shows that the whole world is watching. It’s a reminder that there are people who not only support what happened here in Durham, but support their communities doing the same thing we did here. White supremacy is not welcome anywhere. We will continue to fight.”

Strobino added, “The judge thought this was going to be an easy conviction. Today showed that the power of the people can overcome the state.”

Throughout the day, dozens packed the courtroom to support those facing trial. Later hundreds filled the streets for a solidarity march against white supremacy — which turned into a victory rally after the day’s proceedings.

Nearly 75 people showed up for an early morning press conference at the courthouse before the trials began. The crowd included not only many from Durham, but also solidarity delegations that had traveled from New York, Chicago, Detroit, Baltimore, Philadelphia, San Diego, Indiana, Ohio and elsewhere.

A statement issued by arrestees and read at the press conference noted: “As we head to court, we are buoyed by the strength and determination of being part of an unrelenting people’s movement for justice. We are walking in the legacy of many freedom fighters who have come before us.” The statement uplifted the 50th anniversary of the Orangeburg Massacre in South Carolina and the 39th anniversary of the Greensboro Massacre in North Carolina.

It continued: “They give us the strength and determination to continue to fight racist jails, racist courts, the racism of Durham’s eviction crisis, brought on by gentrification. We will not stop until white supremacy and all forms of oppression and exploitation are defeated.  No matter the outcome of the trial, our movements will push forward with more resolve than ever.”

Throughout the day, the courtroom was filled with supporters as the state suffered defeat after defeat.

In the evening, upwards of 200 people gathered at the site where the toppled monument had once stood for a march to the courthouse to join the freedom fighters as court ended for the day.

As the march prepared to step off, word reached the crowd that another victory had been secured by the people’s movement: Raul Jimenez was found not guilty of all charges. The response from the crowd was electric. Cheers and chants broke out as the demonstration hit the streets heading to the courthouse, taking over all lanes and snarling downtown traffic.

“People all over the world know about what happened in Durham. Freedom-loving people, anti-racist people, oppressed people, they know about what you did,” Larry Holmes, first secretary of Workers World Party, told the rally at the courthouse. “Black people passed that statue going to that court; that statue was there to tell them you may not have physical chains on, but they’re still there, and that you’ll never get justice under this white supremacist system. It was a statue of terror. … The statue was put up at the height of the KKK’s national strength and membership. But [Black people] won’t have to pass by that reminder any more because we liberated it. Statues are symbolic of systems. When you tear down a statue, you remind everyone that someday we’ll tear down things that are bigger than statues and build something that’s about freedom and liberation.”

Takiyah Thompson, one of the five freedom fighters whose charges remain, said, “We’re fighting white supremacy and hatred and a system that keeps its foot on our necks. Around the corner [at the Durham County jail] there are people in jail with bail as little as $50 who can’t pay for their freedom. A few weeks ago, a Black Lives Matter activist was shot and killed in New Orleans. It’s important that we come out and build real community as we continue to fight.”

Thompson added, “I’m looking forward to not justice but a push toward liberation. Because even though we’re in court and we’re doing all this organizing around this issue, we know that this is a protracted battle.”

When white supremacists marched on Charlottesville, Va., in August, they were met with militant opposition by anti-fascist and anti-racist protesters. Heather Heyer, an anti-fascist who marched that day, was murdered by a member of the fascist American Vanguard Party.

Two days later, the people of Durham continued that opposition by tearing down the Confederate Soldiers Monument, erected 93 years ago to terrorize the Black community.

“After the events in Charlottesville, which were meant to revive racist terror in the ugliest form, those who stood up and refused to be pushed back were also fearful of what it meant,” said Sara Flounders, co-director of the International Action Center. “And then two days later, the liberating act in Durham changed the climate and was felt all over the world.”

After the toppling of the Confederate statue, Sheriff Mike Andrews opened a witchhunt against anti-racist activists and issued charges against nearly a dozen people. When the initial defendants went to turn themselves in, hundreds of Durham community members came forward in solidarity, claiming responsibility for the action. Support for the defendants in the community and across the country has only grown since.

“I think the support has been great,” said Thompson. “It’s just been steadily growing instead of waning, as the courts and the legal system would want it to.”

More analysis and reporting on the Durham court proceedings and the ongoing anti-racist struggle will appear in future issues of WW.