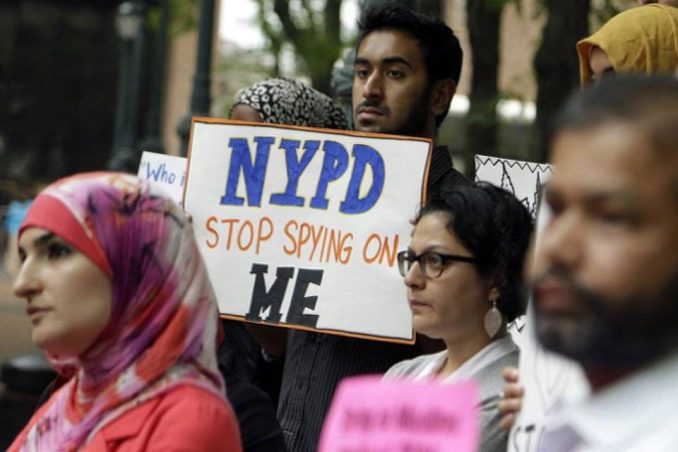 Two Muslim men have challenged the New York Police Department’s cloak of secrecy over NYPD surveillance of Muslim mosques and student groups. The men’s case went to the New York Court of Appeals here on Feb. 6, with more than 30 supporters filling the spectator seats.

The men’s lawyer demanded to know why New York state’s Freedom of Information Law request for the spy documents was met with an evasive NYPD response that it could “neither confirm nor deny” that such documents even existed.

The NYPD has a long history of spying on civil rights organizers and anti-war activists, as well as leftist organizations and members. A 1971 federal lawsuit put in place guidelines that supposedly prohibit the NYPD from collecting information on political speech unless it is related to “terrorism.”

News reports in 2011 and 2012, including from the Associated Press, exposed a combined CIA/NYPD program to spy on Muslims in the New York area: “The Demographics Unit is at the heart of a police spying program, built with help from the CIA, which assembled databases on where Muslims lived, shopped, worked and prayed. Police infiltrated Muslim student groups, put informants in mosques, monitored sermons and catalogued every Muslim in New York who adopted new, Americanized surnames.” (ap.org, Aug. 21, 2012)

Police admit: not one “terrorism” case

Police officials in legal depositions had to admit that they did not open even one “terrorism” case based on this spy unit.

Suspecting that they were targets of this police surveillance, former Rutgers student Samir Hashmi and Manhattan Imam Talib Abdur-Rashid filed FOIL requests seeking any NYPD records pertaining to surveillance of the two men or of any ­organizations they were affiliated with.

Instead, they used the bizarre “Glomar doctrine” to declare that the two men had no right to know if there were any spy documents. The Glomar was the Howard Hughes-built ship that the Navy and CIA used to raise parts from a Soviet submarine that sunk in 1968. When a journalist in 1974 tried to obtain documents about this venture, the CIA declared that national security permitted them to respond that they “could not confirm nor deny” the existence of documents about the Glomar.

The NYPD citation of the Glomar doctrine is the first time that a local police force has ever used national security to deny a FOIL request. If the denial is upheld in court, the doctrine could be used by any police agency to spy on progressive organizations and individuals with complete secrecy and impunity.

After the Feb. 6 hearing, the plaintiffs, lawyers and supporters held a press conference outside the courthouse. “What the NYPD is trying to do is to foster secrecy, which is actually detrimental to the public,” said Omar Mohammedi, the lawyer for the two men.

“Obviously [the denial] was a result of the NYPD surveillance against the Muslim community, which we believe was illegal surveillance — and they know that — and that’s why they don’t want to release the documents.”