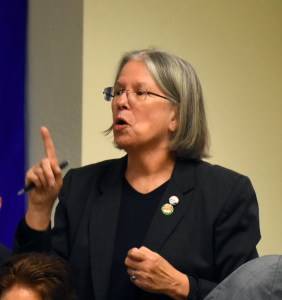 Washington, D.C. — This Workers World reporter was able to intervene in favor of socialist Cuba as the new Cuba Internet Task Force held its inaugural public meeting on Feb. 7 in the U.S. State Department headquarters here.

The task force’s conclusions are set up to promote the same violations of Cuba’s sovereignty practiced since Cuban revolutionaries toppled the U.S.-backed Batista dictatorship in 1959.

Those U.S. tactics, aimed at regime change, have failed. The mission description of the State Department’s task force admits its goals in euphemistic language: “The task force will examine the technological challenges and opportunities for expanding internet access in Cuba including through [U.S.] federal government support of programs and activities that encourage freedom of expression through independent media and internet freedom.” This means the U.S. aims to encourage those hostile to the Cuban government to use the internet for these goals.

It’s no surprise the U.S. Agency for Inter­national Development sits on the task force. USAID contracted Alan Gross to install military grade covert communication devices in Cuba in 2009. Gross was arrested in December 2009 and spent 5 years of a 15-year sentence in a Cuban prison.

The U.S. government initiated and funded the TV/Radio/Internet propaganda media, given the misappropriated name of Cuba’s national hero, José Martí. This media group has a seat on the task force, as does its oversight agency, the Broadcasting Board of Governors.

Initially, 10 slots for 3-minute public comments were planned for the Feb. 7 public meeting. Five speakers of the original 10 opposed the task force objectives and its attack on Cuban sovereignty.

“Even after the last presidential election, Pew Research polls demonstrated that 75 percent of people in the U.S. support diplomatic relations with Cuba and 73 percent support ending the U.S. blockade of Cuba. I am one of them. The statistics hold for Cubans in the U.S., too. One hundred and ninety-one of 193 countries voted to oppose the blockade just last November at the United Nations General Assembly.

“The Federal Register announcement says the purpose of the Cuba Internet Task Force is ‘to examine technological challenges and opportunities for expanding internet access in Cuba.’

“Have any of you been to Cuba? When you go, you will see as I have with my own eyes the Cuban people communicating using smartphones at the expanding number of hotspots. They are talking with friends and relatives in the U.S. and other countries. Home internet is beginning. Public notice is given about the plans for reducing internet prices. And the prices really do go down. Cubans use Facebook and Twitter and email.

“In 2009, I was with a group of British union officials in Havana when their cell phone rang — their phones worked in Cuba, but mine did not. Canadian phones worked in Cuba. Now my phone works in Cuba, too. The Cuban telecom company ETECSA has agreements with AT&T, Sprint, T-Mobile, Verizon and Google. Those agreements became possible when this government — not the Cuban government — this government stopped blocking them.

“After 120 years, the United States must come to grips with the fact that Cuba does not belong to the United States. How is it proper to sit in the U.S. State Department and discuss this matter as though Cuba is not a sovereign country?

“Do you want to assess challenges and opportunities for expanding internet access? Let’s start with my city, Detroit. The FCC reported as recently as 2015 that 40 percent of my city’s residents have no access to the internet. Let’s use the budget for this Task Force and the previous radio/TV and internet regime change projects dreamed up in Washington for infrastructure to bring quality, affordable internet access to all in cities like Detroit and rural areas, too.

“So to improve internet access in Cuba, negotiate with the Cuban government in a respectful and equal way, end the blockade and travel restrictions, and return the occupied Guantánamo territory to the Cuban people.”