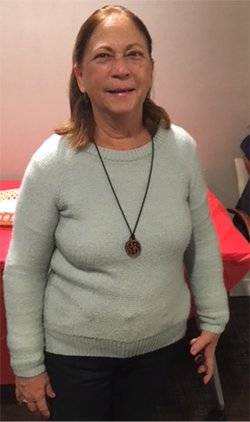 New York — Cuban educator Griselda Aguilera Cabrera, who at 7 years old was the youngest instructor in her country’s 1961 literacy campaign, has been touring the U.S. Two of her New York City stops were on Feb. 10: first, an event hosted by the Puerto Rican Nationalist Party in the Bronx; and then, one sponsored by the New York-New Jersey Cuba Sí Coalition in mid-Manhattan.

The latter involved over 100 participants and was chaired by IFCO/Pastors for Peace Director Gail Walker. Aguilera began by citing Fidel Castro´s 1953 courtroom self-defense titled “History Will Absolve Me.” She said in Spanish: “Fidel stated the program that the new government would carry out — and one of the first matters was educating the people.” Aguilera added that after the revolution triumphed in 1959, preparations began for how to impart basic reading and writing skills to farming families in the countryside, workers in the factories, and urban homemakers and elders.

“Maestra,” a film directed by Catherine Murphy, illustrated how life-changing and dynamic the one-year literacy campaign was for so many Cubans. Over half of the teaching volunteers were teenage women. Between Jan. 1 and Dec. 22, 1961, not only did 700,000 people become literate, but an entire generation realized their ability to develop a new society.

Aguilera elaborated that reading lessons included such topics as preventative hygiene, how to form farming cooperatives, why a one-crop economy had made Cuba poor, and that everyone has the right to housing, health care and education. The campaign went forward despite the 1961 Bay of Pigs invasion, hatched in the U.S., and other counterrevolutionary attacks, including the murder of one literacy teacher. After the United Nations declared Cuba a “territory free of illiteracy,” the teachers held a victory march in Havana, carrying giant pencils.

The Manhattan meeting also heard from two activists from Mothers Cry for Justice. Hawa Bah spoke of witnessing how her son Mohamed Bah, an African immigrant, was killed by the New York Police Department in 2012. With the support of the movement, she has pursued justice through several court cases, which have finally resulted in some civil charges. Juanita Young, mother of Malcolm Ferguson, who was also slain by the NYPD in 2000, described learning about the Cuban Five and going to Cuba to meet their mothers. Young observed that the values of the literacy campaign are still in effect in Cuba today.

Cuba’s contributions to world literacy include the “Yo Sí Puedo” campaign, which, according to Aguilera, has spread literacy to 10 million people in over 30 countries, including in Indigenous languages. Revolutionary Cuba has also made unique developments in medicine and health. Aguilera emphasized that an end to the U.S. blockade against Cuba would boost health care in both countries.

Watch Aguilera’s full speech and get details of her other U.S. tour stops at tinyurl.com/y9j93puo/.