The Department of Labor announced a new rule Dec. 4 to allow employers to pocket workers’ tips. Low-wage restaurant workers, predominantly women of color, unions and pro-labor organizations immediately condemned it as unfair to all tipped workers. But internal reports, exposed by Bloomberg Law Feb. 1, showed that DOL suppressed analysis finding workers would lose billions of dollars in income. Denouncing the cover-up, the Economic Policy Institute predicts, based on its analysis, that “tipped workers would lose $5.8 billion a year in tips, with $4.6 billion of that coming from the pockets of women working in tipped jobs,” mostly Black and Brown women. (Common Dreams, Feb. 4)

When DOL analysis showed the workers’ loss would give bosses a windfall, staff were ordered to revise the data to decrease the impact. When that still made Secretary Alexander Acosta “uncomfortable,” the White House gave its approval to publish the proposal without economic data. EPI and other pro-worker groups have called for the rule to be rescinded and for an investigation into the cover-up. 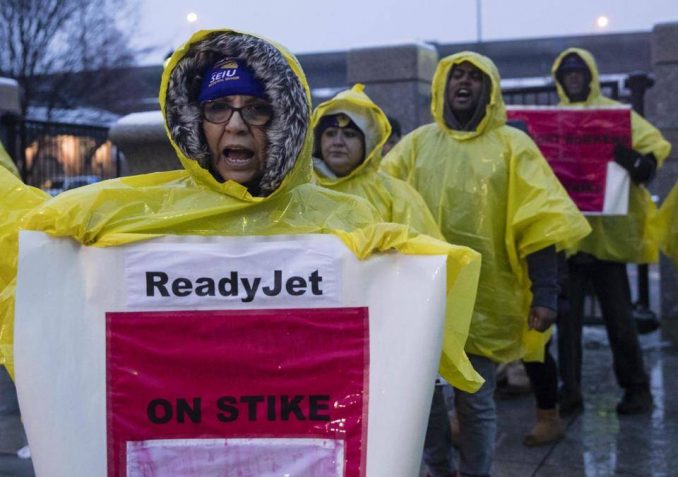 ReadyJet and FSS have a history of illegal retaliation against the workers’ six-year quest to form a union. The National Labor Relations Board has charged both with wage theft and safety violations at Logan for years. According to Service Employees District 615, intimidation ramped up after the strike authorization vote, with managers calling in police and taking photos of workers talking to union reps. SEIU Local 32BJ alleges that management tried to entice some workers to cross the picket line with promises of full-time hours and benefits. (Boston Globe, Feb. 7)

But other Logan airport workers have been winning unions in droves. Since SEIU began organizing there in 2012, nearly 22,000 airport workers have earned the benefits and equity a union brings. As part-time ReadyJet driver Carlos Morales told the Globe, “I’m happy to be on strike, because there’s a lot of injustice at the airport, and this is what we have to do.”

Grad student workers on the move in D.C. area

Georgetown University announced Feb. 2 that it will recognize graduate student workers’ right to unionize with the Georgetown Alliance of Graduate Employees, affiliated with the American Federation of Teachers. The university agreed to sign a groundbreaking agreement for a third-party union election, affirming it will respect the outcome regardless of whether the NLRB, stacked with Trump appointees, reverses its ruling on the eligibility of graduate students to join a union. GAGE began organizing in mid-2016.

Meanwhile, grad student workers at the University of Maryland, organized in Fearless Student Employees, introduced HB 199 to end the statewide prohibition against collective bargaining of grad employees. “We want the state to recognize us as who we are: employees who deserve collective bargaining rights and employment protections,” FSE President Yvonne Slosarksi told dclabor.org on Feb. 5. The Maryland House Appropriations Committee held a hearing on the bill Feb. 6, where FSE presented written and in-person testimony for collective bargaining rights, including demands for better pay and hours.

Low-wage workers and immigrants rallied at the Virginia capitol in Richmond on Jan. 24 with a list of demands vital to the interests of all working people. Activists from Take Action Virginia, elected officials, and unions, including Food and Commercial Workers Local 400, SEIU Local 32BJ and Laborers’ International Union of North America, joined together to demand expansion of Medicaid, an increase in the $7.25 minimum wage to $15 and the right of undocumented workers to have driver’s licenses. (ABC8 News, Jan. 23)

Kroger worker Dominic said he had “coworkers who can’t afford to get by no matter how many hours they work.” Luis Aguilar, advocate for CASA, an immigrants’ rights group, stated, “Both parties have been failing the immigrant communities by not being able to govern or find practical solutions.” According to Jaime Contreras, vice president of SEIU 32BJ, “If you’re not [aiding workers], I don’t care if you’re a Democrat or Republican, we’re going to come after you.” Though Democrats in the legislature touted Medicaid expansion as a top priority, that has yet to happen. The people’s movement needs to keep up the heat!