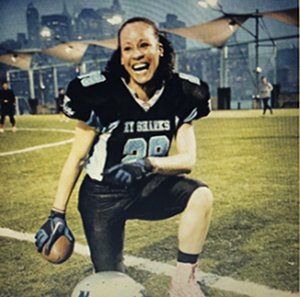 Black history includes the hiring of the first and only Black female professional football coach in the U.S. She is Collette Smith, who signed on with the New York Jets in 2017, the team’s first female coach. Smith made her coaching debut at the Jets’ preseason training camp in the summer of 2017. She is the third female coach in NFL history. The first was Jen Welter, who the Arizona Cardinals hired in 2015.

Jets coach Todd Bowles stated: “Her football knowledge is outstanding. It’s all-male interns so far. I thought it would be a good idea to bring in a female intern, strictly off her skill set, not because she’s female. She’s a hell of a football coach and she fits in with the guys.” (espn.com, July 29) Smith says the players were welcoming and accepting. She says she’ll criticize them for errors, but unlike some coaches will praise them for their good moves, or as she puts it, “I’m motherly to them.” (“Here and Now,” WABC, Feb. 5)

Prior to joining the Jets, Smith played with the New York Sharks in an independent women’s football league for three years until having to retire due to repeated knee injuries. She played in the defensive backfield as a safety. Afterwards, she became the Sharks’ defensive back coach.

The Sharks play at the Floyd Bennett football field in Brooklyn in the spring. Only the coaches get paid, not the players. The games are attended by only 100 to 300 people, a small turnout. They play in near obscurity. There are no corporate sponsors; however, the league is openly looking for sponsors. So far, only the New York Giants and the New Orleans Saints have shown interest in the women’s league for training purposes.

Advocates for women’s football want to empower inner-city, low-income young girls and help them believe in themselves, know their self-worth, and love and respect themselves and others. They also want to teach boys that they and girls are equal. However, perceived stereotypes still exist. Sports also helps keep kids off the street.

Collette Smith grew up in Queens, N.Y. As a child, she watched football games with her father and became a lifelong Jets fan. She started playing football at age 42. Previously, she was a ballet dancer. Since passage of the 1972 Title IX Education Amendments, civil rights legislation covering athletics and gender equity, two out of five females now participate in sports, she adds.

Smith states: “Women’s games are not involved in ‘taking a knee,’ but they understand that Colin Kaepernick and others are taking a knee to protest police brutality of Black men; and that’s a positive thing. And, contrary to projections, people still are watching NFL games. Also, President Trump should not be commenting on taking a knee.”

Upon being hired by the Jets, Smith said: “I’m on top, I’m humbled and I’m proud. This could’ve happened with any NFL team. But it just so happened that it was my beloved Jets; this is bigger because of that. God forbid it would’ve been with the Patriots. But I still would’ve done it. While I recognize the enormity of my accomplishments and what it means to sports, I’m also looking forward to the day when a woman being hired by a professional sports team is a non-history.” (newyork.cbslocal.com, May 26)

Smith sees her new opportunity as “a way for me to empower women. Don’t dream small, play big and go for it. One day a woman will come to a football team and it won’t be a big story. It’ll just be football. When that day comes I’ll be more honored and even more proud. We as women carry a lot on our shoulders. Right now, it happens to be football for me.”