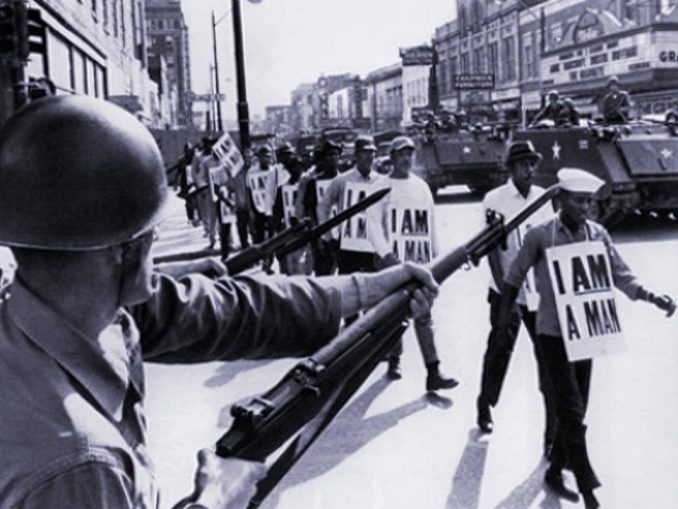 The importance of the strike was underlined by a flier handed out by Local 831, which pointed out the life expectancy of a sanitation worker was 54 years compared to 67 for the entire U.S. population. Even today, according to the Federal Bureau of Labor Statistics, “refuse and recyclable material collectors” consistently have one of the highest rates of on-the-job fatalities.  Seventeen NYC sanitation workers were killed on the job between 2000 and 2014.

The workers’ decision to strike was about far more than money.

One sanitation worker, a shop steward, said it all at a standing-room-only union meeting two days before the vote: “We may handle garbage but we’re not garbage.” (“Dignity and Respect: The History of Local 831” by Kevin Rice)

The sanitation workers’ contract with the city had run out in May 1967. The city offered the workers a measly $400 annual wage increase. When NYC mayor and strikebreaker John Lindsay refused the union’s demand for only $200 more a year and other improved benefits, the workers shouted, “No contract, no work!”

Then they “persuaded” their union leadership to waive the Teamsters’ constitutional requirement for a mail-ballot strike vote and launched the great NYC sanitation workers’ strike of 1968.

Workers World Newspaper on Feb. 16, 1968, devoted six stories and an editorial to the strike, with headlines like “Sanitation strike came close to being a class showdown.”

WW wrote: “There are 10,000 sanitation workers in New York City. They are asking for a $12 a week raise in pay. The total cost to the city would be about $6 million a year. … Last fall a little group of bankers convinced the city it needed ‘better subways’ and got a referendum passed to spend $2.5 billion for these allegedly better means of transport. This clique of bankers will supply the $2.5 billion of other people’s money for a price. They will rake off $125 million in tax-free interest each year for themselves and the city will pay it. That’s 21 times the $6 million the sanitation workers are asking for. And these bankers would never have to lift a garbage pail!”

The 1968 strike continued for nine days until Feb. 10, despite the media demonization of the union. The New York Times wrote on Feb. 9: “The runaway strike by the city’s unionized garbage collectors is the latest miscarriage of civil service unionism that relies on the illegal application of force to club the community into extortionate wage settlements. … Mayor Lindsay has taken the right and necessary course in moving for an injunction under the state’s new Taylor Law. The city cannot surrender to such tyrannical abuse of union power.”

President of the sanitation workers’ union John Delury was jailed. Mayor Lindsay asked other unions, including District Council 37 of the American Federation of State, County and Municipal Employees, the city’s largest public employee union, to provide scabs and have their members pick up the garbage. In solidarity with the striking workers, other city workers refused.

Rockefeller flinched, saying: “The National Guard was used to break a strike in which a family corporation was involved when I was a child. Men and women were killed. … I will not use the National Guard.” Rockefeller was referring to the 1914 Ludlow massacre, when his grandfather, John D. Rockefeller, the owner of Colorado Fuel and Iron Company, got the Colorado governor to call in the National Guard to break a mine workers’ strike. The miners and their families were huddled in tents when the militia opened fire. Over 60 strikers and family members were shot dead or burned alive when their tents were set ablaze by the troops.

But Rockefeller was just pretending to shed tears for the Ludlow martyrs. Three years later in 1971, Rockefeller would massacre another group of striking workers, the Attica prisoners.

A Workers World editorial named his real reason for sparing the sanitation workers: “Rockefeller refused to call the National Guard … because he was afraid to do so.” He had revealed his fear of labor’s strength in a Feb. 9 statement: “There are real risks as far as the stability and structure of organized labor and organized community are concerned.”

When the strike was finally settled, the union won a wage increase above the city’s offer: double-time pay for Sunday work and a 2.5 percent increase in the city’s contribution to their pension funds.

Most of all, this was a victory for dignity and respect for the sanitation workers and for labor solidarity. 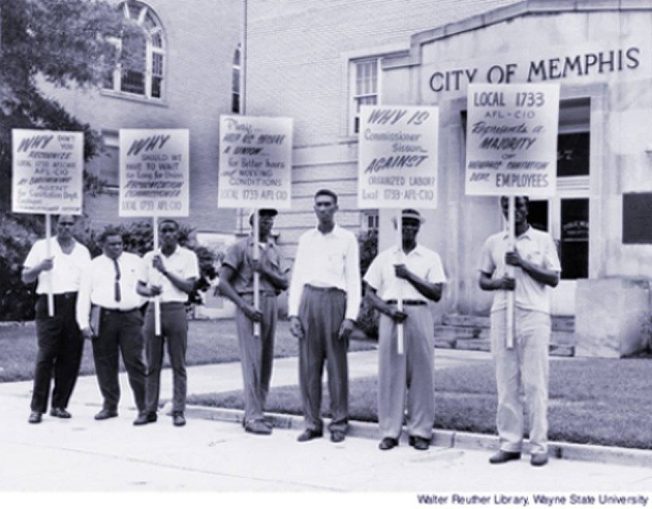 Memphis sanitation workers fight for their union, AFSCME Local 1733, and their right to strike, in the spring of 1968.

Two days after the NYC sanitation workers’ strike ended on Feb. 12, the predominantly African-American sanitation workers in Memphis, Tenn., went on strike. The union on the ground in the strike was AFSCME Local 1733. This was the famous “I Am a Man” strike, which the Rev. Dr. Martin Luther King Jr. was supporting when he was assassinated.

On Feb. 1, two African-American sanitation workers, Echol Cole and Robert Walker, had been crushed to death in one of the city’s outdated trucks. Memphis had no facilities for Black workers to wash up, change clothes or get out of the rain. Cole and Walker were sheltering from the rain inside the truck’s barrel when the compacting mechanism malfunctioned. The truck hadn’t been repaired because the city wouldn’t spend money for safety for these workers.

Only recently, after almost 50 years, did their families receive their pension benefits. Many U.S. unions held a national moment of silence this Feb. 1 to honor Cole and Walker.

On the first day of the Memphis strike, the Memphis Press-Scimitar wrote: “The country has been astonished at the garbage mess in New York, but it might have known that the trouble there was catching. Memphis Public Works officials said flatly that the trouble here was triggered by the developments which brought the New York strikers pay increases.”

Jesse Epps, a veteran labor organizer involved in the Memphis strike, commented on the Memphis-New York connection. Epps, who was with Dr. King when he was killed on April 4, spoke to a 2008 New York City sanitation workers’ meeting. The workers were celebrating being the only NYC uniformed workers’ union to negotiate and win a Martin Luther King birthday holiday in their contract.

Epps said: “It was you who gave [the Memphis sanitation workers] the courage to act. It was these men from New York, if I may use the colloquialism, that fired the shot and made [the U.S.] stand up and its conscience be pricked and compelled Dr. King and others like him to come into the fray.” (Workers World, Jan. 8, 2011)

After the murder of Dr. King, oppressed communities in 110 U.S. cities rose up in rebellion.

Now more than ever, it is crucial to remember the lessons of these earlier, militant strikes, led primarily by African-American workers, the majority living under brutal segregation in the South, but courageously fighting on.

The ruling class and the Trump administration are ramping up attacks on public sector workers and unions, the majority of whom are women and people of color. A negative ruling on Janus v. AFSCME, scheduled to be heard by the U.S. Supreme Court on Feb. 26, could strike a financial blow at the ability of public sector unions to collect dues. As racist, sexist right-to-work backers spew their message supporting Janus, the U.S. labor movement is mobilizing resistance to this threat around the country, including a Feb. 24 NYC protest. We are not prepared to accept this assault on our rights without a fight!

Today, in the face of these attacks, the 1968 NYC sanitation workers’ strike continues to be a spark for labor unity and class struggle.

Yudelovich has been a public sector union activist in New York City for more than 40 years and dedicates this article to his mentor, WWP founding member, awesome labor organizer and dispenser of revolutionary optimism, Milt Neidenberg, who died on Feb. 4.