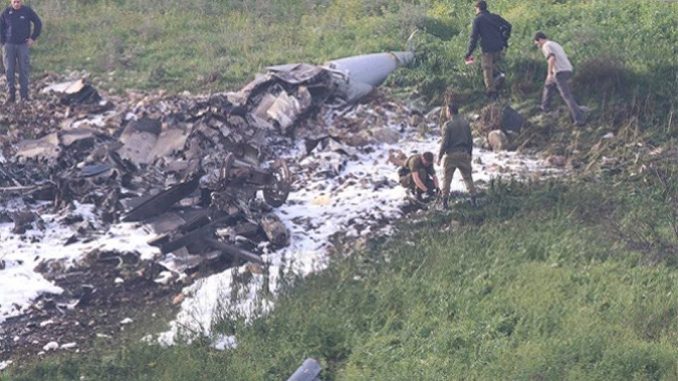 Feb. 11 — In the past week, the U.S. military opened a new bombing attack on forces loyal to the government in Damascus and the Israeli Air Force targeted what it called “Iranian bases” in Syria with a massive attack. These assaults raise the possibility of another chapter to the U.S.-NATO-Israeli aggression against Syria, which has been going on for nearly seven years.

The Syrian government of Bashar al-Assad, along with its allies Russia, Hezbollah and Iran, has been gaining the upper hand against the many-sided imperialist intervention that has turned more than half of Syria’s 25 million people into external and internal refugees and killed at least 220,000 of them.

An Israeli F-16 flying a raid on alleged drone bases in central Syria was shot down by the Syrian Air Defense Force. According to Reuters of Feb. 10, quoting a former commander of Israel’s air force, this was the first time an Israeli F-16 had been shot down since the 1980s.

Israeli planes frequently attack targets in Syria. A spokesperson for the Lebanese-based liberation organization, Hezbollah, said in the same report that the shootdown marked “the start of a new strategic phase” to limit Israel’s ability to enter Syrian airspace. Demonstrators in Damascus handed out sweets because they were so thrilled at this sign of Syria’s ability to punish the Israeli killing machine.

Currently, there are about 2,000 U.S. troops inside Syria. Secretary of State Rex Tillerson has said the U.S. intervention has no end date and the size of the U.S. force will increase.

That’s the reason Israel stepped up its air attacks on Feb. 10, focusing on what it called “Iranian bases,” and why the United States has announced it will maintain and increase its troop levels in Syria.

Also on Feb. 10, according to the Israeli paper Haaretz, Kurdish fighters backed and armed by the U.S. shot down a Turkish attack helicopter. NATO-member Turkey, whose President Recep Tayyip Erdogan describes the YPG (People’s Protection Units) as terrorists, is carrying out an offensive directed at the Kurdish-majority town of Afrin in Syria.

Earlier in the week, a Russian SU-25 was shot down in Idlib province, relatively close to the Turkish border, by a reactionary Islamist group, using U.S. weapons.

The same day, the headquarters of a group of so-called “Syrian Democratic Forces,” a joint Arab and Kurdish force backed by the U.S., came under attack. It appears that U.S. advisers were working there.  According to U.S. Army Col. Thomas Veale, a spokesperson for the U.S.-led coalition, about 500 troops, using artillery, mortars and Russian-made tanks, were involved in the attack.

The U.S. claimed 100 of the attackers were killed in the strikes, which were countered by U.S. F-22 stealth jets, F-15 fighters and MQ-9 drones, as well as a U.S. High Mobility Artillery Rocket System.

Whatever the differences in goals and tactics of the imperialist and reactionary militaries intervening against Syria’s people — which include the U.S., its European NATO imperialist allies, Turkey, Israel and various reactionary sectarian militias — the people of Syria have the right to fight and to make their own alliances to preserve their independence and national sovereignty against any and all of these forces.