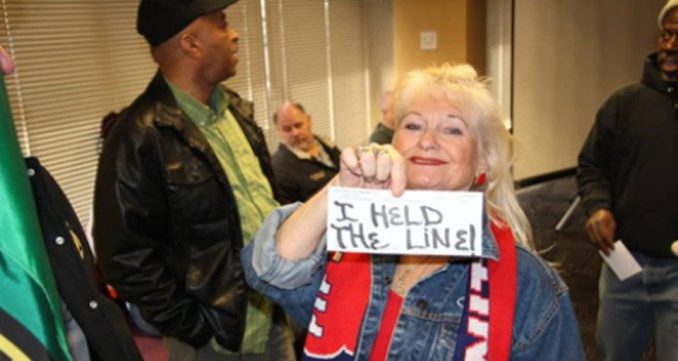 The workers overcame years of being stonewalled by their bosses at First Student Inc., who refused them any kind of decent healthcare plan or retirement.  First Student, a giant school bus monopoly with friends in the Seattle School District leadership, was forced to buckle after a districtwide solidarity walkout on Feb. 7 by 5,000 Seattle school teachers.

The drivers, members of Teamsters Local 174, voted 97 percent for their new contract. The healthcare and retirement plans they had before the strike were woefully inadequate. Under the new contract, they have a new comprehensive healthcare plan, affordable for families. They also have a greatly improved pension plan.

“This is life changing,” said Teamsters driver Olivia Moore, who has been struggling with cancer with no health insurance. “This is what we have been fighting for. I can go to the doctor. I can retire someday. I can’t even tell you how much that means.”(teamsters174.net)

The company had promised the Teamsters that a new improved contract would be negotiated once First Students’ $27 million bus contract with Seattle Public Schools was approved. That promise was made in summer 2017. Months went by without any significantly improved healthcare or retirement plan being offered.

The Teamsters held a one-day bus strike on Nov. 29 to warn First Student and let everyone in the district know they were ready to strike.

The bus drivers went on strike on Feb. 1. This was the second school bus strike against the company in a month, with one also held in the Pasadena/Glendale/Alhambra, California, area.

In Seattle spirited picket lines were up at both of First Students’ bus lots. The company’s efforts to get drivers to cross picket lines didn’t work, either for picking up students or making a dent in the strike. Drivers were offered eight hours’ guaranteed pay per day to cross the line, though they usually work five hours, as well as $50 a day and lunch.

It quickly became clear that drivers were going to gain much more by striking than by scabbing.

Then, just when many thought the strike would be an extended action, the school teachers showed solidarity. On Feb. 7, the 5,000 teachers of the Seattle Education Association (SEA) walked out at mid-day, before their required afternoon training sessions. They flooded the Teamsters’ picket lines with hundreds of teachers in both the north and south bus lots.

Both unions see themselves as partners in student education and in labor solidarity. Teachers also picketed in the community, at a crossroads in front of Franklin High School. There Seattle City Council member Kshama Sawant joined pickets and criticized the school district while addressing the media.

Back in October, the school district had threatened to fine First Student $1.2 million a day in damages for any strike it caused.  But Sawant said the district hasn’t followed through with that demand.

The teachers’ solidarity on Feb. 7 was the turning point in the strike. First Student had stopped negotiating. By the very next day, the company and union were in “marathon” negotiations, and a contract was agreed to a day later, on Feb. 9.

During the strike, many unionists, parents with children and community groups came to the bus drivers’ lines in solidarity. At least two bus drivers’ unions sent resolutions in solidarity with Teamsters 174. These came from the San Francisco school bus drivers, Sheet Metal, Air, Rail and Transportation Workers Local 1741, and the Boston School Bus Drivers Union, United Steelworkers Local 8751, which also made a monetary contribution.

This strike was a great struggle waged by low-paid workers, many of them women and workers of color, in a wealthy city. Seattle has 65 giant construction cranes up downtown, more than any city in the country. (Seattle Times,  July 11, 2017)  Last year the rise in Seattle housing prices was the fourth fastest in the U.S.

Workers face havoc in their lives, including rising rents and mass evictions. There is an exodus of workers from Seattle, and many bus drivers have to live outside the city. This gentrification goes hand in hand with anti-labor attacks and demands by the bosses for megaprofits. Meanwhile, the necessities of life for the working-class majority are ignored.

The Seattle school bus drivers’ strike by Teamsters Local 174 has national importance, opening up a path of united labor struggle by the working class in solidarity against the corporate monopolies.