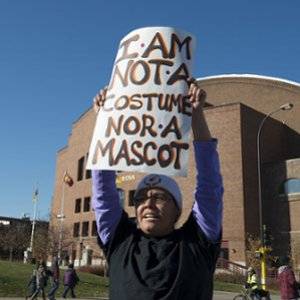 One of many ongoing protests against the continued use of racist symbols by big business sports teams.

After decades of struggle, the hated racist symbol of Cleveland’s professional baseball team will finally be removed from uniforms, caps and promotional materials. The team and Major League Baseball announced on Jan. 29 that the racist mascot will be eliminated in 2019, but the bigoted name of the team will remain.

Leaders of this struggle consider this a partial but important victory. Why is there a one-year delay? It is probably a business decision to make money so merchandise can be sold to the hardcore racists who miss the “good old days” of white supremacy and genocidal theft of Native land.

The first demonstration to ban the caricature was held in 1971. The size and militancy of opening day actions in Cleveland grew after 1991, with the formation of the Committee of 500 Years of Dignity and Resistance.

At the 1997 World Series, Vernon Bellecourt, a leader of the American Indian Movement and president of the National Coalition on Racism in Sports, was arrested for setting fire to a stuffed doll, which symbolized the despicable mascot. He did this while protesting outside Jacobs Field, now called Progressive (Insurance) Field. Juan Reyna and Juanita Helphrey from the Committee of 500 Years of Dignity and Resistance were also arrested.

After charges were dropped in 1998, another attempt was made to burn the effigy. Bellecourt and Reyna were arrested again. So were Charlene Teters, a leader from Illinois of the National Coalition on Racism in Sports and Media; Zizwe Tchiguka, a local leader of the All-African Peoples Revolutionary Party; and James Watson, a white member of the Committee of 500 Years of Dignity and Resistance. Once again, all charges were dropped. (Workers World, April 12, 1998)

Demonstrations, lawsuits and mass media articles continued to press for the elimination of the Cleveland team’s racist name and mascot.

At the 2016 Cleveland vs. Toronto American League playoffs, Canadian activists sued to stop the use of the logo based on the Ontario Human Rights Code. The struggle went international.

Native fighters and their supporters will be out again at the team’s home opening game on April 6. Demonstrators will guard against any double-cross on the logo by management and plan to continue the fight against the team’s hated name.