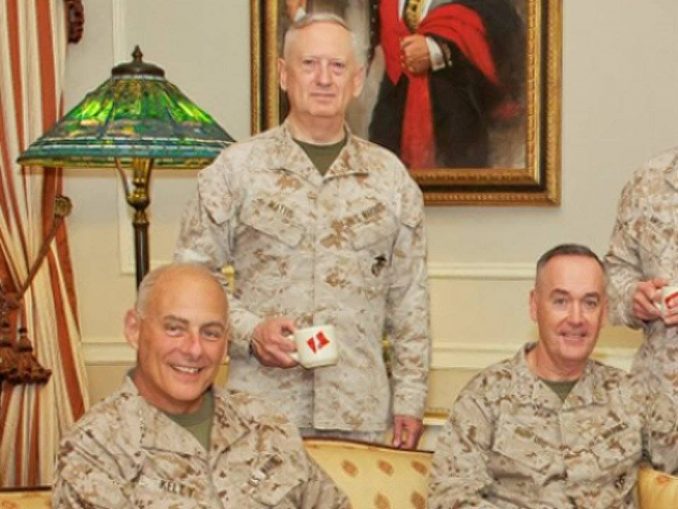 A most remarkable and telling indicator of where the ruling class stands today on the question of war and peace is the widespread acceptance of the Trump administration’s open surrender of civilian control to the military. Three high-ranking generals are his close aides in the White House: National Security Adviser H.R. McMaster, Secretary of Defense James Mattis and Chief of Staff John Kelly.

An axiom of imperialist democracy is civilian control over the military. This has never been honored. The military has always been able to make its influence felt in the White House.  But this facade has always been maintained as a matter of doctrine in order to sustain the fiction of U.S. democracy.

And the capitalist media, instead of sounding the alarm about the danger posed by the military, have praised the generals as “the adults in the room” who will restrain Trump.

The ruling class has been silent about Trump’s State of the Union speech. He attacked China and Russia as adversaries and promised to reverse the decades-long policy of weapons limitation with a gigantic nuclear weapons buildup to come. Plans for “modernization” of the nuclear arsenal, begun at the end of the Obama administration, have been greatly expanded by Trump.

Military as a Trump defender

With Donald Trump, the military has attained a goal that it sought for years: a major share of political control at the center of the capitalist government. This occupation of the White House by the military brass is particularly dangerous as the Trump administration lays plans for a military attack on the Democratic People’s Republic of Korea.

The achievement of this long-sought goal of the Pentagon has more than just military implications. The three high-ranking generals in the White House have political input on both military and domestic policy. These generals — and the entire military — need Trump. They can count on his bellicose, belligerent bluster to give them cover for their aggressive, expansionary military plans. Furthermore, he is the one who let them in the door and enabled them.

Trump gave them more troops for the battlefields in Afghanistan, Iraq and Africa; more authority to carry out military operations without oversight; full authority to launch drone strikes without having to check with Washington. Above all, he promised them a vast increase in the military budget and authorized a $1.2 trillion nuclear buildup. He has been the arms salesman in chief, making $110 billion in deals for arms to Saudi Arabia.

This dangerous escalation of militarism has gone largely uncriticized in the capitalist media.

The billionaires and bankers in the administration and beyond need Trump. They thrive off his tax cuts, the destruction of corporate and environmental regulations, the giveaways of public lands and the sea coasts to big oil, and the destruction of regulatory agencies. Gary Cohen of Goldman Sachs, head of the National Economic Council; Treasury Secretary Steven Mnuchin of Goldman Sachs; Secretary of State Rex Tillerson, former CEO of ExxonMobil; and Commerce Secretary Wilbur Ross, a billionaire financier and buyout king — all have circled around Trump to ward off any threats to his presidency.

What does this mean politically for the generals, the Pentagon and the masses? It means Trump’s Wall Street appointees have just as much at stake as the generals in protecting the president.

Trump vs. the FBI

For example, in Trump’s furious struggle against the FBI, the Justice Department and much of the capitalist establishment, the brass stood with Trump. Deputy Attorney General Rod Rosenstein and FBI Director Christopher Wray went to appeal to the White House to stop the release of an anti-FBI, anti-Mueller memo drawn up by House Intelligence Committee Chair Devin Nunes. The memo was designed to protect Trump from Mueller’s investigation into his relations with Russia. Gen. Kelly met with the two officials and turned them down, telling the public that the President wants the memo out “pretty quick.”

The chief executive of U.S. imperialism, with the consent of his entire administration, together with the Republican Party leadership in the House of Representatives, are in a campaign to discredit the FBI as being partisan against Trump and part of a “deep state” conspiracy.

How should this fight between Trump and the FBI be viewed?

The White House, the chief purveyor of violence, war and reaction on the planet, is at war with the FBI. But the FBI is the supreme capitalist institution of repression and persecution. It is now operating in 70 countries. It is the implacable enemy of the radical movement, liberation organizations and all the oppressed, as well as the unions and other working-class organizations. It has persecuted communists, socialists, anarchists, Black liberation organizations, civil rights organizations and anti-war activists ever since its inception after WWI. The FBI and the Pentagon are twin enemies of the workers and oppressed worldwide.

Why is it that the Trump administration and the Republican Party are being condemned by the anti-Trump press and the Democratic Party for violating long-standing protocols against presidential meddling in the Justice Department and the FBI? Indeed, the Democratic Party has become the staunchest defender of this reactionary spy agency, the political police of the ruling class.

First of all, we must understand what the corporate media and politicians mean by an “independent” FBI and Justice Department.

During the Watergate crisis, Richard Nixon tried to use elements of the CIA and the FBI against the Democratic Party and, in general, against his political opponents. This led to a strong movement in the ruling class and the political establishment to prevent the use of the spy agencies against a president’s political enemies. To make it plain, capitalist democracy was supposed to bar the use of the repressive apparatus by one political faction in the ruling class against its opponents.

The idea of the “independent” FBI and Justice Department meant that the White House was not supposed to communicate with the FBI or the Justice Department except under rare circumstances. For example, when Bill Clinton met with Obama’s attorney general, Loretta Lynch, on the tarmac of a Phoenix airport in June 2016 — while Hillary Clinton was under investigation for using a personal email account as Secretary of State — Lynch had to recuse herself from the investigation. The automatic assumption was that Bill Clinton was trying to influence Lynch in favor of Hillary Clinton. Lynch’s recusal followed protocol.

Trump and military vs. capitalist legality

The fact that Trump is on a crusade to violate bourgeois legality is a matter of concern to the workers and the oppressed. Trump’s crusade is open. The military has its own hatred and contempt for bourgeois democracy — which can stand in their way of launching war and aggression — but they are quiet and act behind the scenes.

Our concern, of course, has nothing to do with defending the FBI or the Justice Department. It is that Trump and the generals’ contempt for bourgeois legality, custom and protocol has been, and will be, turned against the masses, as exemplified by the open attempt to ban Muslims from immigrating to the U.S.

The workers and all the oppressed need to know what’s happening in the ruling-class struggle over the FBI. The Mueller investigation into alleged Russian attempts to influence the elections is a false inquiry, as far as the exploited classes are concerned. The very premise of the investigation is calculated to sow anti-Russian chauvinism and war fever among the population. It is meant to bolster the military buildup, including nuclear weapons.

Trump is trying from the right to overturn all the rules regarding political interference, influence and bourgeois legality — not just in the Mueller investigation but in many spheres. Undocumented workers are kidnapped off the streets by Immigration and Customs Enforcement agents. Torch-bearing Nazis and Klansmen in Charlottesville, Va., were praised as “good people.” Trump openly rakes in profits from his businesses while he is president and refuses to submit his tax returns.

Trump violates nuclear treaties by commissioning new weapons. He unilaterally pulls out of the Paris Climate Accord. He threatens to tear up the Iran Treaty, which was signed by four imperialist countries plus Russia and China. His mode of operation is to overstep bourgeois norms and violate bourgeois legality in the interest of political reaction.

The only way to stop the anti-working-class lawlessness of Trump and his generals and bankers in the White House is to mobilize the masses in the streets for militant resistance. A place to start would be a massive anti-war struggle demanding “Hands Off Korea” and saying “NO to the nuclear buildup,” which Trump and his military handlers have put on the agenda.