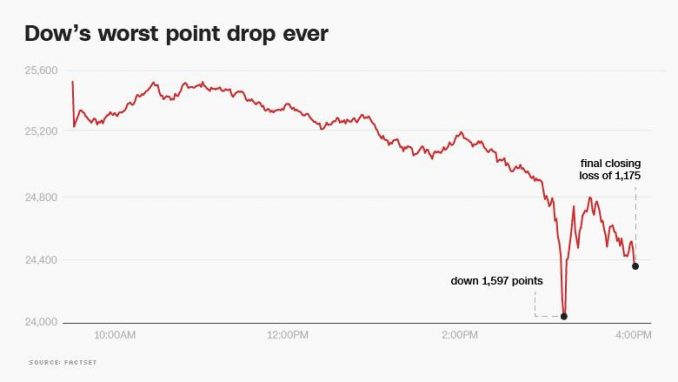 As we write this — noon on Tuesday, Feb. 6 — the global financial markets are in their third day of turmoil. It is reported that stocks have already lost at least $2 trillion in value. This is not the first, or the fifth, or even the tenth time such a contraction has happened. Indeed, periodic crises in the stock market have occurred repeatedly throughout the history of capitalism.

In the capitalist media, everything is focused on which companies are the biggest losers and which large investors will be hit hardest. Not one word addresses the impact this will have on workers all over the world.

As far back as the early 1980s, three-fourths of the people in the U.S. owned shares of corporate stock or stock mutual funds either directly in their own names or indirectly through their pension funds, insurance policies, savings accounts, etc. A deep drop in the markets can make all this go up in smoke.

As Workers World Party founder Sam Marcy wrote after the crash of 1987: “The stock market, which had been an example of capitalist prosperity, now will turn out to be the instrument to facilitate the wholesale expropriation of millions of workers and middle-class people through the loss of their savings, pensions and other retirement funds, insurance funds and other institutions, all of which have played the stock market.”

In another article about that crash, he said that “it confirms the Marxist conception of capitalist economics. It shows that, in the final analysis, all the most skillful manipulators and financial wizards on a global basis, with all the most sophisticated technological communications, cannot control the forces of capitalist anarchy and chaos.”

We have no crystal ball. But we can say this: If the markets continue to tumble, Wall Street will demand a government bailout, as it did in 1987 and again in 2008. Fred Goldstein of WWP wrote in 2009 in the introduction to his book “Low-Wage Capitalism” that “several trillion dollars of paper wealth were wiped out. An economic collapse was prevented only when Alan Greenspan, who was appointed head of the Federal Reserve in August 1987, poured tens of billions of dollars into the financial system to support the banks and the stock market on an emergency basis.”

Right now, the budget for the Pentagon is eating up funds needed for medical care, safety, environmental protection, the infrastructure, job training and other services already sorely underfunded. If more layoffs follow this financial crisis, as has happened in the past, government assistance will be needed for millions more people. But even as it transfers over $1 trillion to the richest people through the new tax laws, the administration can be expected to cry poverty as it pours billions into shoring up the capitalist market.

This market turmoil, no matter how it turns out in the short term, cries out for a strong response to protect the immediate interests of the workers and oppressed while building for an overturn of the destructive and outmoded system of capitalism itself.