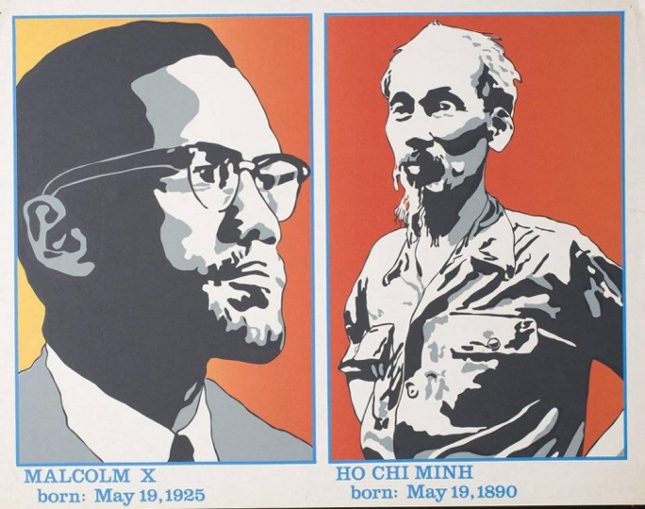 During the height of the genocidal war waged by the United States against the people of Vietnam during the 1960s and early 1970s, African Americans were involved in a life-and-death campaign in the U.S. aimed at reclaiming their national identity, human rights and racial dignity.

January 30 was the 50th anniversary of the Tet Offensive that shook the foundations of the U.S. war strategy in Vietnam. In a surprise move, the forces of the National Liberation Front and the People’s Army of Vietnam attacked more than 100 cities and towns across the country.

The U.S. anti-war movement during this period is often portrayed as led by white university students who had left-wing political leanings, with African Americans being almost exclusively preoccupied with Civil Rights and Black Power demands within a domestic framework.

The reality of the period proves to be quite the contrary. From the early 1960s, leading figures in the Civil Rights and Black nationalists movements expressed their opposition to the U.S. role in Vietnam.

The most advanced elements offered concrete acts of solidarity with the Democratic Republic of Vietnam in the North and the National Liberation Front operating in the Pentagon-occupied South.

Both Vietnamese and the African-American people were subjected to imperialism and national oppression by an enemy that sought to crush their respective entitlements to peace, social justice, self-determination and sovereignty.

Dating back to at least 1924, the man who became known as Ho Chi Minh (Nguyen Ai Quoc) had lived in upper Manhattan as an activist among the African-American community during the period known as the Harlem Renaissance.

Ho had worked with the organization led by Marcus Garvey known as the Universal Negro Improvement Association and African Communities League, headquartered in New York City at its zenith in the early 1920s.

Ho reflected on his observations conducted just six decades after the conclusion of the U.S. Civil War and the legal dissolution of chattel slavery, in a period of extreme state repression, widespread institutional racism and arbitrary violence, in a 1924 pamphlet entitled ”On Lynching and the Ku Klux Klan.” The work documents various aspects of social conditions prevailing in African-American communities throughout the U.S.

‘The Black race is most oppressed’

Ho Chi Minh noted in this important work: “It is well-known that the Black race is the most oppressed and the most exploited of the human family. It is well-known that the spread of capitalism and the discovery of the New World had as an immediate result the rebirth of slavery. What everyone does not perhaps know is that after 65 years of so-called emancipation, American Negroes still endure atrocious moral and material sufferings, of which the most cruel and horrible is the custom of lynching.”

Ho chronicles the history of racial terror against African people from the end of the war between the states over the future of slavery to the burgeoning resistance of the people following World War I.

During the war and afterward, African Americans migrated in the millions to Northern, Midwestern and Western cities, becoming a social force in the struggle for freedom and democratic rights whose impact extended beyond their own population.

This same pamphlet emphasized the significance of this transformation: “The victory of the federal government had just freed the Negroes and made them citizens. The agriculture of the South, deprived of its Black labor, was short of hands. Former landlords were exposed to ruin. The Klansmen proclaimed the principle of the supremacy of the white race. Anti-Negro was their only policy.

“The agrarian and slaveholding bourgeoisie saw in the Klan a useful agent, almost a savior. They gave it all the help in their power. The Klan’s methods ranged from intimidation to murder. The Klan is for many reasons doomed to disappear. The Negroes, having learned during the war that they are a force if united, are no longer allowing their kinsmen to be beaten or murdered with impunity. They are replying to each attempt at violence by the Klan.

“In July 1919, in Washington, they stood up to the Klan and a wild mob. The battle raged in the capital for four days. In August, they fought for five days against the Klan and the mob in Chicago. Seven regiments were mobilized to restore order. In September the government was obliged to send federal troops to Omaha to put down similar strife. In various other states the Negroes defend themselves no less energetically.”

The Vietnamese Revolution and challenges to imperialism

Ho Chi Minh left the U.S. and traveled to other parts of the world including Europe. In 1930, the Indochinese Communist Party was formed, encompassing revolutionaries from Vietnam, Laos and Cambodia who were battling French colonialism. Later Vietnam was occupied by both France and Japan.

The struggle for national liberation and unity consequently took on an international character. After the defeat of Japan, the Democratic Republic of Vietnam was proclaimed in December 1945, prompting another guerrilla war against French imperialism.

By 1954, France had been humiliated at the battle of Dien Bien Phu. Ho Chi Minh had become a hero in the international movement for independence and socialism.

However, U.S. imperialism took over the war of domination from France, and by the early 1960s President John F. Kennedy was deploying “advisors” in the form of military personnel to South Vietnam, which was under U.S. occupation. The U.S. refused to allow free elections and the war continued.

African-American opposition to the Vietnam War and solidarity with the NLF and the government in Hanoi were embodied by Malcolm X (El Hajj Malik El-Shabazz) and the Nation of Islam (NOI). They had been against U.S. involvement in Vietnam since the early 1960s.

After leaving the NOI, Malcolm X adopted a decisively revolutionary position related to world revolution and spoke frequently of solidarity with the People’s Republic of China and the Vietnamese Revolution.

Next: The rising tide of the Black Liberation Movement and international struggles for national liberation and socialism.