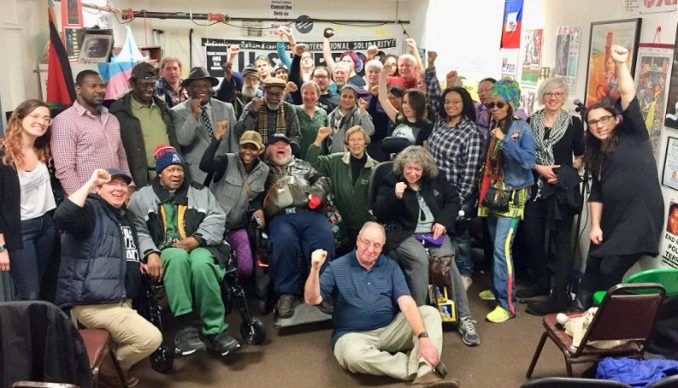 “Do It Like Durham!, Workers Solidarity — Tear Down White Supremacy” was the theme of a Workers World Party forum here on Jan. 27. The Black History Month event brought together working-class organizers who are challenging and toppling the racist, sexist, anti-transgendered ideas and institutions of capitalism.

Featured speaker was Takiyah Thompson, a Durham, N.C., freedom fighter who, along with their comrades, tore down a racist Confederate statue in that city on Aug. 14. Thompson spoke about the decision to act and the need felt for concrete action to underscore that anti-racist activist Heather Heyer‘s death at the hands of Nazis and KKK members in Charlottesville, Va., two days before was not in vain.

Thompson described the toppling and the reverberations across the country, as more racist statues were taken down in following months.

Thompson told the crowd the movement that started in Durham will not stop until all charges against Durham activists are dropped, all monuments to racism have been removed, and white supremacy has been destroyed.

Mahtowin Munro of the United American Indians of New England talked about the struggle to abolish Columbus Day and celebrate Indigenous Peoples Day instead: “When we go into [City Council] hearings to talk about why we need to get rid of Columbus Day, we are told by bigots … that we were cannibals and that Columbus brought civilization to us. When we talk about genocide, they say that we all died off from diseases as though untold numbers of massacres never occurred.

“And they say, ‘Why don’t you people get over it?’ To which we respond:

Christine Renee of the WWP Trans Caucus and Stonewall Warriors told the audience: “Right now, the legal status and livelihoods of over 300,000 people from Haiti, Honduras and El Salvador are currently at risk. Just today there was a rally for Siham Byah, a local activist who was deported last month to Morocco. Also at risk now are the livelihoods of transgender people here in Massachusetts.

“Three weeks ago, in North Adams, Mass., Christa Leigh Steele-Knudslien was killed by her husband. This marks the beginning of yet another year stained with anti-trans violence. Last year was reported by many news outlets to be the deadliest year to be transgender on record, with about 28 trans people being killed. The culprit behind the struggles of im/migrant and transgender in America is the exploitative capitalist system.”

Describing the discrimination she faces as a young person with disabilities searching for a job, Kristin Turgeon of WWP called on people to fight the dead-end system of capitalism that oppresses all poor and working people.

Tonight’s meeting was chaired by Hazel of the WWP Trans Caucus. Delicious home-cooked Haitian food was provided by Chantal Casimir of USW Local 8751.