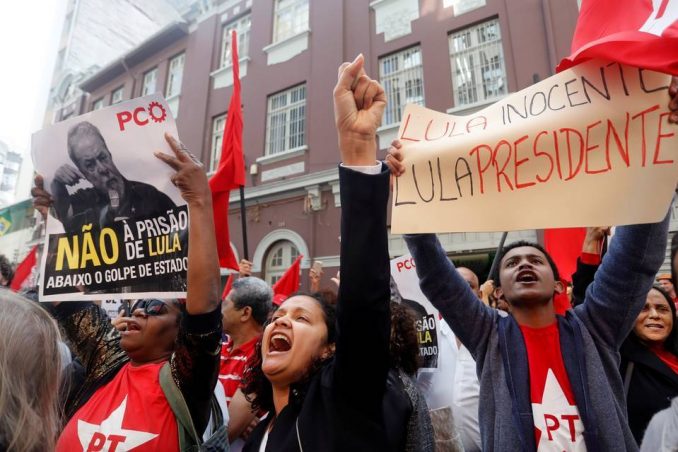 An appeals court in Porto Alegre, Brazil, upheld 3 to 0 a judgment for alleged corruption against former President Luis Ignacio “Lula” da Silva on Jan. 24, while thousands of Lula’s supporters protested there and in other Brazilian cities. The court even extended his sentence from 9 1/2 to 12 years in prison.

Not only Lula’s Workers Party (PT), but also the Landless Movement and its leader João Pedro Stédile, the Communist Party of Brazil and the newspaper Brasil de Fato condemned the original trial and now the Jan. 24 decision as politically motivated. Intellectuals from around Latin America and the world signed a petition exposing the political nature of the trial.

Lula had more than 40 percent support in polls on the presidential election scheduled for next Oct. 7, much more than any of the other candidates. The current right-wing president, Michel Temer, who was put in office by an impeachment coup, has barely more than an 8 percent approval rating. Lula would likely win the election if he can run.

Lula’s supporters, who include many but not all left parties and movements in the biggest South American country, consider the ruling to be a partisan political judgment aimed at stopping Lula and the PT from winning the October presidential election. While he still has the possibility of appealing or outflanking the court’s decision, it throws up an enormous obstacle.

Lula was president from 2001 to 2008, followed by Dilma Rousseff from 2009 until she was ousted by a political coup in May 2016, thinly disguised as an impeachment for misuse of government funds. Although no solid evidence was presented against Rousseff, the Senate voted 55 to 22 to impeach her.

Lula was president at a time when the Brazilian economy was growing and Brazil’s raw materials could be sold at high prices on the world market. His government was therefore able to use available funds to help tens of millions of extremely poor Brazilians, mostly from the North and Northeast, to achieve an adequate standard of living.

In other words, his policies rescued millions from starvation. This made the PT government popular among workers, especially in the poorer states.

But Lula could do this while still satisfying Brazilian big business, which was growing. Rousseff’s presidency took place under more difficult conditions for Brazil, especially after the 2008-09 collapse of the world capitalist economy led to much lower prices for raw materials and curtailed growth.

Rousseff’s administration made more concessions to the neoliberal rich of Brazil, which cost her government support among its working-class base. Despite the PT’s concessions, the Brazilian oligarchy treated the PT and its leaders as obstacles to its exploitation of the people and the environment.

Temer’s government has been cutting social security for workers and retirees, weakening employment rights for workers, opening up Brazil’s interior and seabed for exploitation, and reducing government controls on business.

Many of the members of the Brazilian Congress are under investigation for corruption — no surprise for any country where capitalism runs rampant. However, in Brazil the ruling class is attempting to use the judiciary to direct corruption charges against the PT and others on the left. This even has a name: “lawfare,” the combination of law and warfare.

Washington is much more comfortable with politicians like Temer, who has been accused of collaborating with the CIA and other neoliberals. The PT leaders, including Lula, have been more protective of Brazilian sovereignty and have friendlier relations with Cuba, Venezuela and other countries that challenge U.S. hegemony in the hemisphere.