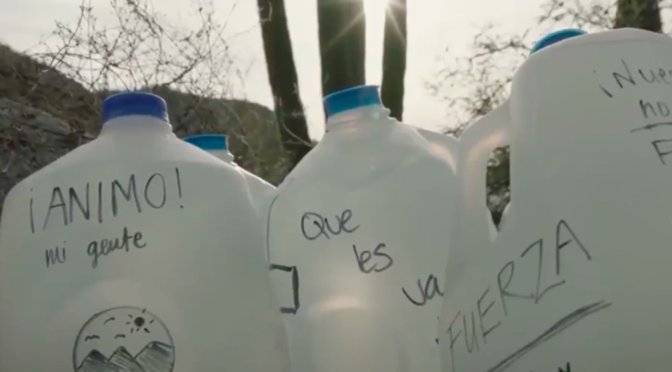 A video made public on Jan. 17 showed U.S. Border Patrol agents fiendishly destroying water bottles meant for desperate migrants in the Arizona desert. The solidarity group No More Deaths leaves the water along the “Devil’s Highway,” a corridor of land on the border.

Hours after the video’s release by NMD, one of their volunteers was arrested by the Border Patrol in obvious retaliation. He was hit with a felony charge for “harboring undocumented immigrants” — for providing food, water and clean clothes to two migrants.

International news has shown in heartbreaking detail how fatally dangerous migrant journeys can be across the globe. At the southwestern U.S. border, the temperature can soar above 110 degrees during the day and become bitterly cold at night. By the Border Patrol’s own count, some 7,209 migrant people have lost their lives there. (USA Today, Dec. 14)

The actual number of deaths must be much higher, with those found by ranchers or local sheriffs uncounted. Many are buried in mass and unmarked graves. Many are women and children.

For the Border Patrol to deny a few sips of water to those crossing the desert is more than cruelty. It is torture and it is murder, administered on top of U.S.-spawned death squads and turmoil in their homelands that migrants are fleeing.

The continued intensification of attacks on migrants is part and parcel of the Trump administration’s far-right, white-supremacist agenda. This includes revoking temporary protected status for hundreds of thousands of Haitian, Nicaraguan and Salvadoran migrants; voiding regulations that allow migrant families to stay together; and promoting intransigent plans to build a racist “Wall” on the U.S.-Mexican border.

Now the attack on migrants is accelerating to include migrant rights organizers and humanitarian groups. According to a Jan. 17 report by No More Deaths and La Coalición de Derechos Humanos, Border Patrol agents “routinely intimidate, harass and surveil” their volunteers. (intercept.com)

In recent months, eight former summer volunteers have been arrested around the country on federal charges, including driving in a wilderness area and “abandoning property.” That refers to leaving blankets, water and food on migrant trails, which groups have been doing for years. Earlier, armed Border Patrol agents surrounded and entered a No More Deaths encampment near Arivaca, Ariz., and arrested four undocumented migrants receiving medical treatment from volunteers there.

No More Deaths has demanded “an immediate end to any interference with humanitarian-aid efforts” by the Border Patrol, including stopping “the destruction or removal of water, food, blankets and any other … supplies left for border crossers,” with such destruction being a “fireable offense” for Border Patrol agents. (forms.nomoredeaths.org, Jan. 18)

We agree with those demands. And we also know that it is mass organizing — like the gigantic airport rallies against Islamophobia in January 2017 — that will stop these assaults by the U.S. state.

Onward to organizing that will stop all attacks on migrant peoples and on immigrant rights organizers!