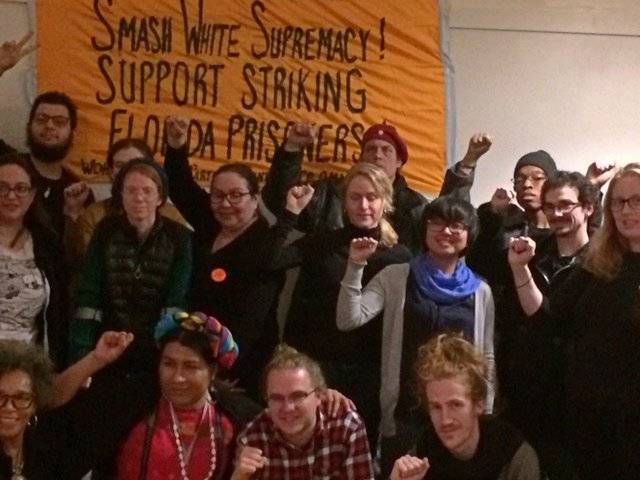 The audience then heard Panagioti Tsolkas from the Campaign to Fight Toxic Prisons call in from Florida to describe the inhumane conditions under which thousands suffer in the state prisons and to urge support for their demands.

Next, there was a panel with Marilynn Winn, executive director of Women on the Rise, and Estrella Sánchez, a Mexican transwoman and immigrant. They described their own experiences in prison and detention centers. Moderator Devyn Springer led the discussion, which had both an emotional impact and also inspired the audience to take political action.

Dozens of people present pledged to participate in the national call-in day, Jan. 22, directed at the Florida Department of Corrections office of Julie L. Jones at 850-488-7480 to demand the end of slave labor and no retaliation against the strikers.

Earlier in the week, WWP members participated in the Rev. Dr. Martin Luther King Jr. march with a banner that read “End Slave Labor!  Smash White Supremacy!  Support Striking Florida Prisoners!” They also distributed hundreds of flyers with the prisoners’ demands and a call for solidarity with the prison strike.