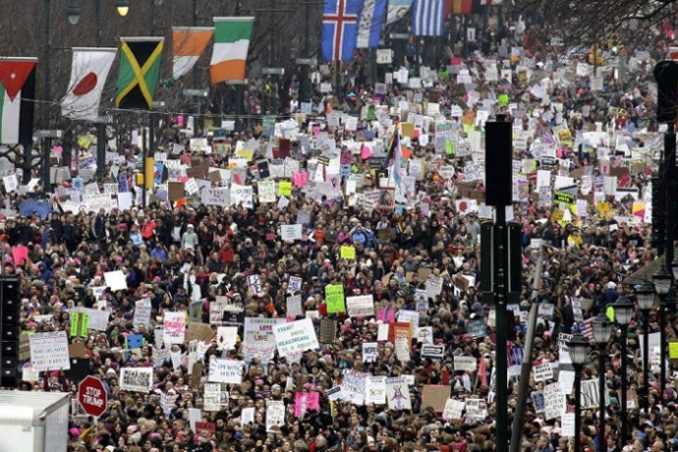 Tens of thousands of marchers filled Benjamin Franklin Parkway on Jan. 20 in Philadelphia as part of a national day of protests for women’s rights and against current attacks under the Donald Trump administration. This year’s march, near the anniversary of a 50,000-person turnout in Philadelphia in 2017, was organized around the theme of “We Resist, We Persist, We Rise!” in solidarity with the growing movement against sexual harassment and abuse.

After a short march along the parkway, participants gathered for a rally on the steps of the Philadelphia Museum of Art, where speakers addressed the crowd. Among the anti-Trump signs were a smattering of pro-DACA (the immigrant Deferred Action for Childhood Arrivals program), Black Lives Matter and other signs calling for more diversity and inclusion.

The nonprofit organization Philly Women Rally, Inc. was responsible for organizing both the 2017 and 2018 rallies. Members include a number of women with ties to local Democratic Party chapters. In 2017, they came under criticism for not taking more steps to ensure diversity or to address special oppression of Black and Brown women.

However, the group not only failed to take steps to proactively address the concerns raised. They made matters worse by announcing, on their Facebook page, that police would be setting up checkpoints through which all participants would have to enter, that all bags would be checked and that attendees would be subject to search by police.

The collaboration with police prompted a call for a boycott of the march from many individuals and groups advocating for people of color, transgender women and other marginalized groups. Johanna James, a co-organizer with the Womanist Working Collective, stated that the police presence invites “trauma on our already traumatized people. Inviting them into that space ultimately means you’re not taking our feelings concerning them into any sort of consideration.” (Philly.com, Jan. 19)

The Womanist Working Collective, the Black and Brown Workers Cooperative, Black Lives Matter Philly, Galaei, REAL Justice, the Women’s Fight Back Network-Philadelphia and Workers World Party/Mundo Obrero-Philadelphia wrote an open letter to the rally organizers which was circulated via social media and distributed at the march.

The statement read in part: “Their decision to collaborate with the police, an arm of the state which notoriously oppresses and terrorizes people of color, disregards the impact of this decision on women of color and other marginalized attendees. … Involving the police in a protest ostensibly meant to empower women flies in the face of everything we know and understand about oppression and the struggles against oppression. It is further wholly unnecessary. …

“From historic experience, police are more likely to harass or attack protesters than to offer any protection. This was particularly clear when police did nothing to stop white supremacists who brutally attacked demonstrators and even killed a protester in Charlottesville, Va., in August 2017. …

“At the end of the day, police presence makes every marginalized group, including women, unsafe. In order to combat the violence that police enact by merely existing, part of fighting for the liberation of ALL women means a call to abolish police and prisons, which get away with heinous crimes against women every day.”

Publicity around the call for a boycott pressured city officials and rally organizers to back down. Their proposed checkpoints were nonexistent the morning of the march. Even organizer Emily Cooper Morse, who in a conversation with this writer prior to the march argued for tight security, stated at the rally, “We are fighting for women’s rights, especially in communities that are marginalized the most.” Her daughter held a sign that read, “‘The most neglected person in America is the Black Woman.’ — Malcolm X.” (Philly.com, Jan. 21)