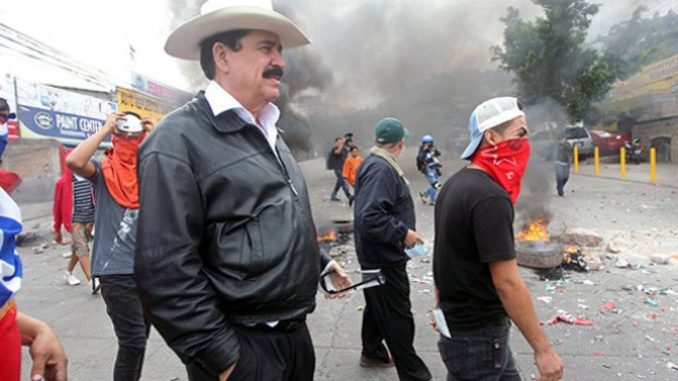 When people answered the call for a week-long political strike across Honduras beginning on Jan. 20, to protest the fraudulent results of the Nov. 26 election, police and soldiers attacked crowds with tear gas. They injured former President Manuel Zelaya in Tegucigalpa, the capital city.

TeleSUR reported on Jan. 21 that people took to the streets and squares and blocked traffic in many cities and towns. In some cases, they fought back police attacks by burning tires and throwing stones. Police injured at least 30 people and killed a 60-year-old man in the city of Sabá.

Zelaya told TeleSUR: “We are the majority. They have tear gas, but we will continue here, we’ll keep on fighting.”

Zelaya is secretary general of the LIBRE Party and a leader of the opposition to Juan Orlando Hernandez (JOH), who was declared winner of the Nov. 26 election. The vast majority of Hondurans say JOH’s win is electoral fraud.

With 70 percent of the vote counted, Salvador Nasralla, candidate of the Opposition Alliance against the Dictatorship coalition, was far enough ahead that there was no chance to overtake him.

On Nov. 27 the JOH regime simply shut down the vote count for three days and fixed the outcome. Even the Organization of American States had to question the vote count. Washington gave it full backing, with the U.S. president congratulating Orlando Hernandez.

Washington treats Zelaya as an enemy. The U.S. backed a 2009 military coup that removed him. Then-Secretary of State Hillary Clinton played a key role by giving the coup makers diplomatic and political support.

According to election observers, the 2013 election that put Orlando Hernandez in office was also filled with irregularities that hurt the opposition LIBRE Party. JOH’s client regime has served the Honduran oligarchy and U.S. imperialism. Since the Honduran Constitution limits presidents to one term, even Orlando Hernandez’s participation in the latest election was illegal.

The current demonstrations should continue until Jan. 27. On that day, Orlando Hernandez is scheduled to be sworn in for a second term. From the scale of the popular opposition that has confronted killer police and soldiers since November, it is apparent that only the brute force of the state apparatus is keeping him in office.

Gilberto Ríos Grillo, national director of the LIBRE party, told Alex Anfruns of Investig’Action in an interview on Jan. 15:

“I, who was a candidate in the elections, have been finding more [popular] support than we had during the election campaign. And that’s taking into account that we won the elections! There are now more sectors of the population that want Juan Orlando out of office.

“The national stoppage that has been declared for Jan. 20-27 will be a full week of seizures of highways, blockades of streets, consumer blockade, etc. … We believe it will have a much greater impact than any of the prior demonstrations.”