The 15th Annual MLK Day Rally and March for Jobs, Peace and Justice drew more than 1,000 people to downtown Detroit on Jan. 15. Abayomi Azikiwe, a leader of the Moratorium Now! Coalition and Detroit Workers World Party, emceed the day’s events and helped give political cohesiveness to the many struggles against outrages and oppressions that speakers, marchers and performers addressed. A spirit of fightback against Trump, racism, capitalism and imperialist war carried the day.

Frank Hammer of the Asotrecol Solidarity Network spoke on the struggle of General Motors workers in Colombia, while Jonathan Roberts, of the Restaurant Opportunity Center-Michigan, motivated the crowd to support servers and other restaurant workers. Crystal Bernard and Carlos Santa Cruz, both young organizers from the Poor People’s Campaign: A National Call for Moral Revival, gave a stirring call to action against racism and injustice.

Cynthia Thornton, president of Pride at Work Michigan, urged everyone to stand up for LGBTQ rights and liberation. Kimberly Simmons, of the Juvenile Lifers Support Group, movingly told of being convicted as a teenager to life in prison and incarcerated for 29 years, as well as the growing struggle to free other juvenile lifers in Michigan prisons. 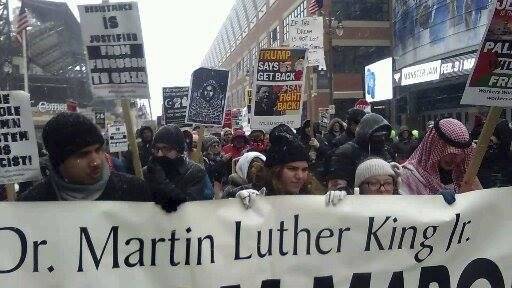 People’s attorney Vanessa Fluker spoke on the crisis of lead poisoning in Detroit, which has intensified with the mass demolition of homes throughout the city following the bank-led foreclosure crisis. Amer Zahr, a writer, stand-up comedian and adjunct professor of law, rallied the audience to support Palestine and continue efforts to stop U.S. aid to racist Israel.

The Rev. Dr. Bernard Lafayette was the honored guest and keynote speaker. Lafayette worked with the two leading Civil Rights organizations of the 1960s, SNCC (Student Nonviolent Coordinating Committee) and the SCLC (Southern Christian Leadership Conference). He became involved in the Civil Rights Movement after growing up in Tampa, Fla., in the 1940s and 1950s.

Lafayette was active in mass campaigns to end Jim Crow and was a participant in the sit-ins and freedom rides in the early 1960s. He was involved when Dr. King and SCLC went to Chicago in 1966 to test out their model of nonviolent resistance in a northern city. King tapped him as SCLC’s program coordinator in 1967, and Lafayette took on responsibility for the 1968 Poor People’s Campaign.

The Metro Times reported Jan. 12 that Detroit was named the best city in the U.S. to celebrate MLK Day by Treetopia for the second year in a row. “Detroit has a profound history of African-American political … and cultural activity,” Azikiwe, MLK Day media coordinator, said in the article.

Musical presentations punctuated the rally and after a Freedom March through downtown Detroit, participants met at St. John’s Episcopal Church for cultural performances and a community meal provided by the Wobbly Kitchen. The MLK Day rally and march enjoyed wide press coverage from all of the Detroit television stations, WWJ News radio and the Associated Press. 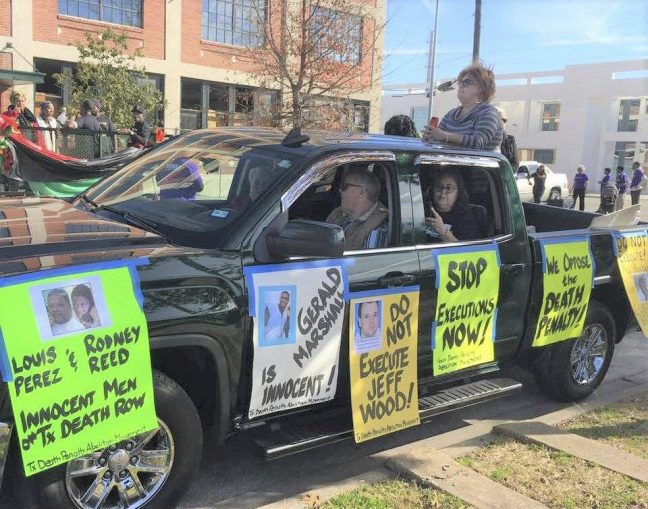 The 40th Annual MLK Parade held by Houston’s Black Heritage Society drew the mayor and many politicians, two African-American members of Congress and marching bands. The more than 200 participants included groups as diverse as the Houston Black Corvette Club and the Houston Caribbean Professionals Association, along with a variety of churches, schools, community organizations, businesses and labor unions.

The Abolition Movement’s contingent was cheered and those lining the streets joined in chanting, “Texas says death row! We say heck no!” It included family members and friends of many death row prisoners, including the kids of George Curry, who tossed candy to children along the route, and a woman who was going to witness her friend’s execution in Huntsville, Texas, three days later.

Conrado Acevedo, an Indigenous activist, drummed the whole route while James Aaron, the former chair of the Black Panther Party in Houston, along with others, handed out more than 1,200 flyers about the death penalty. Longtime activist Leonard Benton drove his 1931 Ford Model A, which was a big hit, especially when he sounded the horn, which honked out a loud “AH-OOOH-GAH” like a drunken goose.

The Black Heritage Society was founded by community leader Ovide Ducantell in 1975 after he met with Dr. King’s father about continuing to honor the legacy of his son. In January 1978, Martin Luther King Sr. came to Houston and participated in the first MLK Parade in the United States, on the newly renamed street of Martin Luther King Boulevard.

More than 300 demonstrators stopped traffic in Portland, Ore., for two hours as they marched down Martin Luther King Jr. Boulevard in a Jan. 15 tribute to MLK organized by Don’t Shoot Portland. It was the 4th Annual Children’s March for Social Justice, so many of the organizers were young people who stepped up to make banners and play a highly visible part of the march.

Demonstrators chanted “Justice for Quanice Hayes!” “Hands up, don’t shoot!” and “I can’t breathe!” King’s “Letter from Birmingham Jail” was read at the final rally in front of the MLK Memorial Sculpture.

Quanice Hayes was an unarmed 17-year-old African American fatally shot on Feb. 9, 2017, by white cop Andrew Hearst. When Hearst was cleared of all charges, Venus Hayes, the youth’s mother, asked for a federal investigation. She said police did not need to shoot. “Quanice was on his knees when he was shot in the head and in the chest,” said Hayes, who was not notified by authorities and instead found out about her son’s death on Facebook. (kgw.com, March 22) 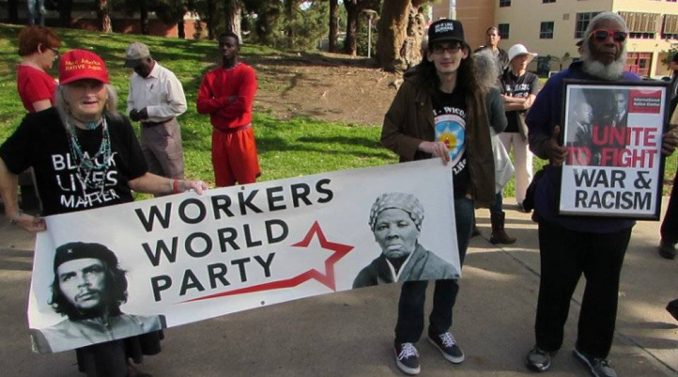 Some of the participating organizations were SURJ (Showing Up for Justice), the San Diego Black Panther Party, UNITE HERE Local 30, Workers World Party, the Racial Justice Coalition of San Diego, Indivisible, the Alfred Olango Foundation and the Council on American-Islamic Relations San Diego, along with many others.

Among the speakers at the rally, chaired by Rev. Harris, were City Council member David Alvarez, the only elected official to show up; Dr. John Warren, publisher of the local newspaper Voice & Viewpoint, and several local ministers.

The families of Alfred Olango, Jonathan Coronel and James Lacy — all shot and killed by police — participated in the march and were on stage at the rally.

In Lexington, Va., more than 800 people participated in the second annual MLK day parade sponsored by the Community Anti-Racism Effort (CARE Rockbridge). Participants came from Charlottesville, Roanoke and other locations around Virginia.