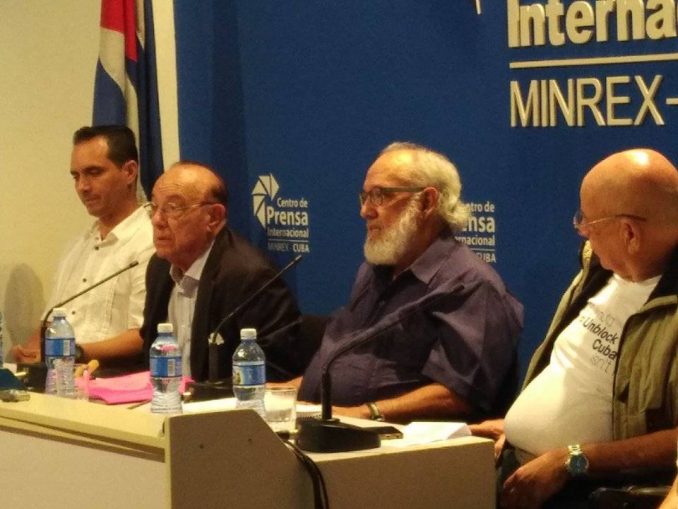 Havana — The 40th anniversary of the founding of the Antonio Maceo Brigade, which has worked tirelessly in Miami and South Florida to end the U.S. blockade of Cuba and U.S. travel restrictions, and for ­Cuba’s right to develop in peace, was saluted in Havana from Dec. 18-22.

Today, poll after poll shows that ­Cubans living in the U.S. — like the majority of U.S. residents — support ending the commercial, financial and economic blockade of Cuba. But it was very different in 1977, when the 55 youths who made up the first brigade rebelled against the seemingly monolithic U.S. hostility toward revolutionary Cuba, just to set foot in the land of their birth.

Migration as a weapon

In tribute a huge Cuban flag, donated by the U.S. veterans, was raised at the oceanside statue and park honoring Maceo. Ricardo Alarcón, the Cuban negotiator of migration agreements with the U.S., explained how the brigade was a response to the U.S. government’s use of migration as a weapon against the Cuban Revolution.

In particular, before the Cuban Adjustment Act of 1966 and the “wet-foot/dry-foot” policy that enticed migration to the U.S. with the promise of a fast track to benefits and U.S. citizenship, there was Operation Peter Pan.

Some 14,000 children arrived by plane in the U.S., victims of this little-known operation. Influenced by CIA and Catholic Church propaganda claiming that the revolutionary government would take children away from parents and send them to the Soviet Union, families sent unaccompanied children to the U.S. in what appeared to be a spontaneous migration process. They were then placed in orphanages or foster homes.

The 55 youths who formed the Antonio Maceo Brigade were among these Cuban-born children and those who were brought to the U.S. by their families. Uprooted from their native land without their consent, and then radicalized by the tumultuous U.S. struggles of the 1960s, they voluntarily returned to revolutionary Cuba.

The brigade’s anniversary program began with a news conference at Havana’s International Press Center featuring Andrés Gómez, who organized the delegation for this celebration, and Max Lesnik, director of Radio Miami and founder of the Alianza Martiana coalition, whose Miami offices were bombed multiple times in the 1970s and 1980s. Gómez, the brigade’s president and founder and editor of Areito Digital, dedicated the weeklong commemoration to Cuba’s historic leader, Fidel Castro.

At a gala event, the Cuban Institute for Friendship with the Peoples (ICAP) was presented with a bust of Antonio Maceo. Fernando González, ICAP president and Cuban 5 hero, explained how the brigade’s work helped build a new relationship between the revolutionary government and Cuban émigré communities in the U.S. and elsewhere. These émigrés showed tremendous courage in defending the Cuban Revolution, in the midst of what was intended to be the South Florida counterrevolution in exile.

At a wreath-laying at the Colon Cemetery, where Cuban émigrés who were major figures in the U.S. solidarity movement are buried, each of their names was called before a moment of silence. These included Luis Miranda, former president of Casa de las America, and Tony Llansó, a Miami organizer to Free the Cuban 5. Floral tributes were placed on two crypts, which hold the recovered remains of the 73 people killed in the bombing of Cubana Flight 455, off the coast of Barbados, in 1976.

Children at the Carlos Muniz Varela school performed music and dance for the delegation. In 1979, 25-year-old Maceo Brigade member Muniz Varela was assassinated in Puerto Rico. A mural at the school reflects the special relationship between the two countries: “Cuba and Puerto Rico are two wings of the same bird: They receive flowers and bullets in the same heart.”

As the veterans prepared to meet the young Cuban generation at the University of Havana, Lesnik spoke passionately at the monument to Julio Antonio ­Mella, just below the steps to the university. Mella, who founded the Federation of University Students and the Communist Party of Cuba, was assassinated in 1929 at the age of 25.

The nearly 50-member brigade delegation came from Miami and Key West, Fla., and Europe, including a representative of Cubans living in Marseilles, France. Solidarity activists from the U.S. included Gail Walker, director of the Interreligious Foundation for Community Organization/Pastors for Peace; two co-chairs of the National Network on Cuba; and representatives of Workers World Party, Party for Socialism and Liberation and Socialist Workers Party.

Participants heard an update on reconstruction after Hurricane Irma, and a discussion about current U.S.-Cuba relations with the Ministry of Foreign Affairs. A visit to the Center of Genetic Engineering and Biotechnology amazed guests with Cuba’s pharmaceutical and medical advances.

The final event was a bonfire at the Julio Antonio Mella International Camp, where Andrés Gómez, filled with emotion as he recalled the first brigade arriving to the camp, carried one of the torches that lit the bonfire.