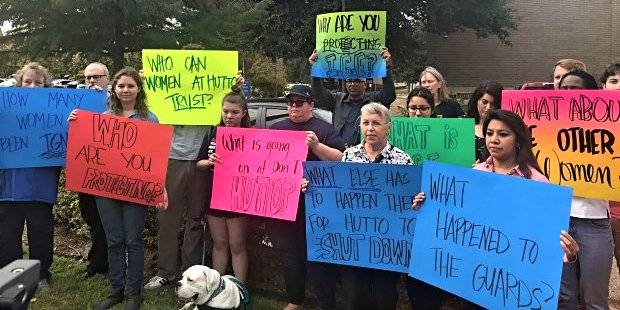 Former detainees and supporters speak out about abuse at ICE Hutto Detention Center in Taylor, Texas.

In yet another blatant instance of cruel and inhumane treatment of migrant workers in the U.S., a woman in an Immigration and Customs Enforcement detention center attempted suicide after repeated sexual abuse by a guard. (Rewire, Jan. 16)

Laura Monterrosa, a Salvadoran, has been held at T. Don Hutto Detention Center in Taylor, Texas, since May 2017. The guard began assaulting her shortly afterwards.

Her charges of sexual assault went ignored, according to Grassroots Leadership, a nonprofit social justice advocacy center based in nearby Austin. The center publicized the migrant woman’s plight after detention center officials neglected to provide medical treatment for Monterrosa after her suicide attempt.

Monterrosa spoke out about her abuse in November 2017. ICE and the county sheriff’s office did little in response. The guard, continuing to work at the center, saw Monterrosa every day.

Monterrosa is not alone in her allegations of abuse. After she spoke out, other women detained in Hutto came forward. ICE declared it found Monterrosa’s allegations to be “unsubstantiated.” That announcement came after only two interviews with Monterrosa, where translation was inadequate and where she was not allowed access to counsel. This additional abuse led to Monterrosa taking over 50 pain pills on Jan. 11, medication given to her by prison medical staff.

Suicide attempts at ICE detentions center are tragically common. Hutto, where Monterrosa is still held, is a medium security prison managed by CoreCivic (formerly Corrections Corporation of America), a for-profit “adult corrections company.” Not much improvement can be expected from this incarceration monster.

CoreCivic has a long and sordid history of prison abuse, including dangerous and fatal medical neglect, rancid food, cruel and inhumane treatment by guards and staff, including the long-denounced practice of solitary confinement, known to exacerbate trauma and mental health issues.

In addition, the Hutto Detention Center, which exclusively detains asylum-seeking women, has a long history of sexual abuse. In 2007, a CoreCivic guard was accused of sexually assaulting a woman “while her son was sleeping in his crib inside the cell,” according to Courthouse News. In 2010, another CoreCivic guard was charged with sexually assaulting eight women he was tasked with transporting. (Dec. 12, 2017)

Any relief Monterrosa may receive depends on an official investigation being launched. Monterrosa can’t be deported while she waits for an appeal of her original asylum case. This means, say supporters, she will continue to encounter her alleged abuser on a daily basis.

One of Monterrosa’s advocates said: “What is happening to Laura is endemic of detention centers and almost impossible to completely eliminate unless we eliminate detention centers. There has been a trail of incidents and most of them go unreported and this is why: they don’t get investigated and the women who come forward are shamed or transferred or otherwise punished.” (rewirenews.org)

In 2016, Human Rights Watch issued a report of deaths in ICE custody. Of the 18 people studied, all committed suicide after demonstrating signs of serious mental health conditions.

Berenice, a woman of Garifuna descent from Honduras, described life in Dilley Detention Center in Texas as “soul-destroying.” Bernice had organized in Honduras for her people and then had to flee the reactionary regime. When ICE told her she could get out with her child if she paid $5,000 in bail, that might as well have been $5 million. That’s when she tried to kill herself, thinking her child would go free. (Guardian, May 22, 2015)

In June 2017, an Afghan national, a woman who had been locked up with her two children, attempted suicide in an attempt to free the children. Samira Hakimi had been held in the Karnes County Residential Center in Texas for six months after crossing into the U.S. from Mexico. She had been told she and her children would be held for only three months. She had no legal counsel and no information about her case, which led to her despair. (HuffPost, June 2017)

Many female migrants are already fleeing violence against women in their home countries. El Salvador, Honduras and Guatemala have female homicide rates among the highest in the world, according to the Washington Office on Latin America. (Feb. 21, 2017)

This turmoil is due to U.S. imperialist domination that leads to instability, the lucrative drug industry and political strife based on U.S. policy, such as stealing of elections in Honduras, as well as other social, economic and political turmoil manufactured by the Pentagon, like the 16-year-long war on Afghanistan.

Meanwhile, an estimated 80 percent of Central American girls and women are raped on their journey to the U.S.. For them to then be jailed, detained and experience further abuse is deplorable. (HuffPost, Sept. 12, 2014)

Conditions for people in detention are only expected to worsen under the Trump administration. What is the solution to this rampant abuse, which is reminiscent of 19th-century prisons?

Solidarity. Organization. Fightback. As women march across the U.S. and around the world, the issue of women and trans people in prisons and ICE detentions must be front and center on our agenda.

Free them all and jail the oppressors— that’s the solution.