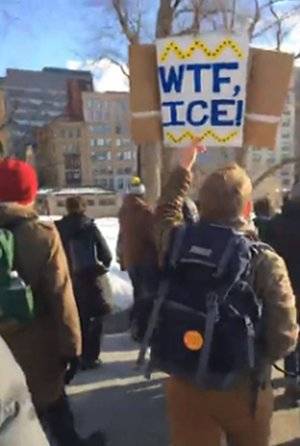 Supporters of Siham Byah march through Boston Common to DCF offices to demand her reunification with her son.

Boston — Supporters gathered Jan. 9 in front of the John F. Kennedy Federal Building here to demand justice for local activist Siham Byah, who was detained by Immigration and Customs Enforcement (ICE) agents at a routine check-in with immigration services in November. Her son was also taken into the custody of the Massachusetts Department for Children and Families (DCF), who then refused to place him in the care of the family chosen by Byah.

Byah herself was sent to the Bristol County jail, run by hated Sheriff Thomas A. Hodgson, a rabid racist who is known for offering the labor of inmates to build Trump’s border wall. Hodgson has been blasted for the harsh conditions in his jail, which include poor heating and ventilation, bad water quality and rampant difficulties with visitor access.

After nearly two months in this facility, where she and other detainees resorted to using bottles filled with warm water to endure the cold in the unheated cells, Byah was deported without warning. She arrived in Morocco with nothing but the clothes on her back, having been denied the chance to say goodbye to her son or even to notify her attorney.

It was significant that the Jan. 9 rally and march began in the plaza outside the federal building. Every Tuesday, deportation hearings are held inside that decide the fates of minors as young as 11 years old, many of whom don’t have legal representation.

After hearing from several speakers from the coalition formed to support Byah — including Byah herself, who called in and described experiencing “extreme hunger, extreme cold, extreme physical and emotional pain, extreme fear and extreme humiliation” while in ICE custody — activists marched to the Boston DCF office to present their demands. Assembled outside, the organizers of the event demanded that Byah be allowed regular contact with her son, that they be given a path to be reunited and that DCF end all collaboration with ICE’s racist deportations.