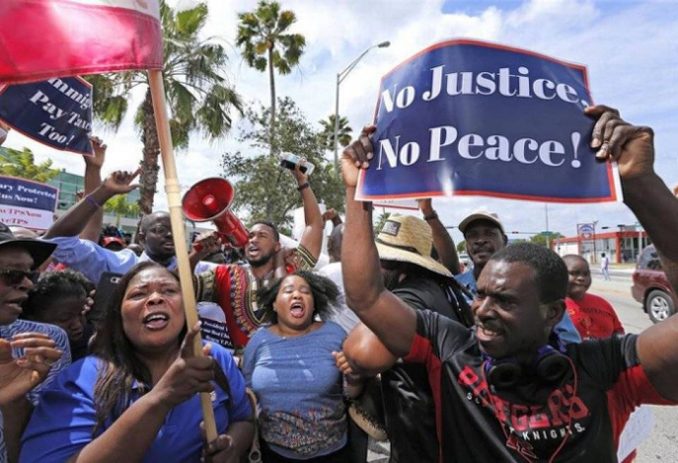 Throughout the world, Haitian communities on Jan. 12 commemorated with grief and anger the eighth anniversary of the catastrophic 2010 earthquake that devastated their homeland.

There was grief because tens of thousands of people had lost their lives. A million and a half had their homes destroyed. More tens of thousands were injured. Many still can be seen hobbling through the streets of Port-au-Prince.

There was anger because the United States ruling class once again had used a catastrophe to invade Haiti at a time when United Nations forces occupying Haiti were in disarray. The Pentagon seized control of its air and sea ports, managing relief supplies that flowed into Haiti contributed due to  worldwide solidarity over this catastrophe.

In anger also because nongovernmental organizations and foundations diverted billions of dollars of aid that had been designated for the Haitian people.

In New York, Dahoud Andre, of the Committee to Mobilize Against Dictatorship in Haiti (Komokoda), led a protest on the anniversary in front of the Clinton Foundation offices on Sixth Avenue. He charged that “the Clinton Foundation, which has an office in this building, stole $6 billion that was meant for the Haitian people.” Bill Clinton was appointed by the U.N. as one of the two top managers of all these funds.

“The press over here has not said anything to condemn the Clinton Foundation, and we hope that today, the press will take this opportunity to ask the Clintons what happened to these billions of dollars,” he added.

The day before the anniversary, Donald Trump used a filthy, racist term in a White House meeting to describe Haiti and African countries, according to members of Congress who were present. Clearly, the calloused and exploitive relation the U.S. ruling establishment has with Haiti is bipartisan.