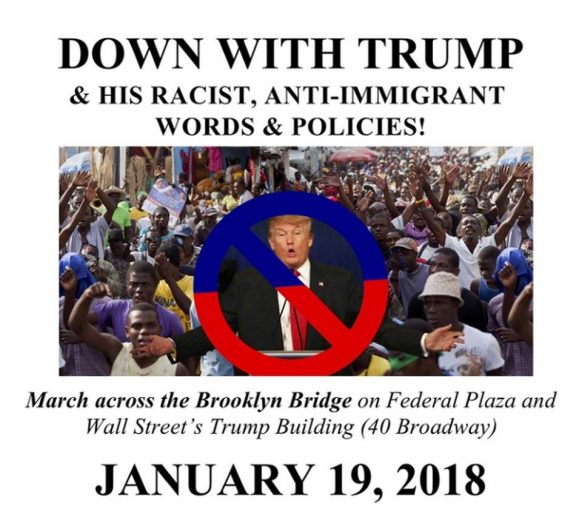 A number of Haitian groups and progressives came together here on Jan. 13 in the office of the newspaper Haïti-Liberté to organize rapid responses to Trump’s rabidly crude, racist declarations and the vicious, cruel decisions that are entwined with his words.

It was a long and fruitful discussion that started with two minutes of silence for the 350,000 Haitians who died in the Jan. 12, 2010, earthquake.

The militants involved, many with deep experience in organizing, felt they needed an ongoing vehicle to push Trump back, one with some common political principles and a structure.  While their base is the Haitian community in New York and New Jersey, they noted that Trump is creating the same problems for all immigrant groups, in particular Salvadorans and Africans.

This desire to reach out was clearly expressed by the fact that the meeting was conducted in English, with translations from Creole as needed.

The groups picked the name of this new, ongoing organization very carefully. It is the “1804 Movement for All Immigrants.” The year 1804 marked the final victory of the Haitian Revolution against French colonial rule and the definitive end of slavery in Haiti. “All Immigrants” means especially to include Salvadoran and African immigrants and all immigrants of color targeted by Trump’s racist invective and decisions.

Knowing full well that for Trump to apologize is as likely as his developing compassion, the meeting still felt that he should make an apology and made that demand one of the group’s principles of unity.

Another principle addresses the U.S. government’s refusal to extend temporary protective status to 60,000 Haitians and 200,000 Salvadorans, who are being forced to leave the U.S. The solution is simple — change “temporary” to “permanent.”

To avoid this movement becoming dominated by bourgeois politicians, many said it needed to be anti-imperialist and anti-capitalist.

The 1804 Movement for All Immigrants wants to have a rapid impact. It picked Friday, Jan. 19, for the date of its first action and the Trump building at 40 Wall Street as its first target.