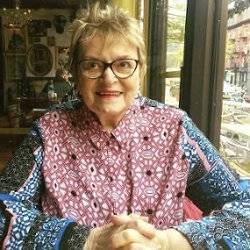 Shirley Littman, labor union, anti-war, social justice activist and “Raging Grannies” artist, died on Dec. 7 in New York City. A Workers World Party supporter, she attended demonstrations, party meetings and events, including the 2015 memorial to LGBTQ fighter, writer and revolutionary, Leslie Feinberg. She is survived by her spouse, Larry, and their son, Danny, who joined Shirley at events.

Some 250 friends and family members attended a Dec. 15 memorial to Shirley at the Church of the Holy Apostles in the Chelsea neighborhood. Her neighbor, Johnnie Stevens, delivered a solidarity message from WWP to Shirley’s family and thanked her for supporting the group he founded, Community Labor United for Postal Jobs and Social Services.

Shirley attended activities that protested threats of post office closings. She wrote a song for the Raging Grannies honoring postal workers and calling for saving post offices. This activist group opposes war and promotes social justice and economic equality through song and satire.

Neighbor Sara Catalinotto said: “I was first involved with Shirley in supporting the Stella D’Oro workers’ strike. We and others were outside Gristedes telling people to boycott the cookies. She was so energetic and loud that nobody could miss our message. She brought the issues to the masses with gusto.

“Shirley was an active supporter of Parents to Improve School Transportation and helped get her union, Communication Workers Local 1180, to endorse the School Bus Bill of Rights campaign. PIST fights for the rights of parents of children with disabilities to better school transportation and educational services and opportunities.” Catalinotto founded PIST.

Larry Littman described Shirley as a devoted union worker who believed in people uniting for the common good to help one another: “It was in her bones. She was a people person through and through.”

The Dr. John Lovejoy Elliott Senior Service Award was given to Shirley in 2015. It honored her leadership and activism in the Chelsea community.

An active member of her local’s Committee on People with Disabilities, Shirley joined its delegation at the NYC Disability Pride Parade. As a shop steward, she led such a fierce fight for equal pay and promotional opportunities for women union members in the NYC Department of Homeless Services that her photograph was featured on the front page of Local 1180’s newspaper, the Communique, for which she wrote articles.

A union sister spoke about Shirley’s support for the “band of brothers,” Woodlawn Cemetery workers. She joined the Local 1180 delegation which protested racism at the Bronx cemetery.

One of Shirley’s union brothers said, “Shirley brought revolutionary optimism to the world.” That inspired a reporter for the community newspaper, Chelsea Now, to headline her obituary, “The Revolutionary Optimism of Shirley Littman, 80, Will Shine On.”

The Raging Grannies sang several songs at the memorial, including the postal song Shirley authored. They sang a tribute to her, entitled “Her Song Goes On.” It ends: “Her songs helped quench the flames of war and stilled the tyrants evermore. And through the strife, we hear her still, And so we know, her song goes on.”