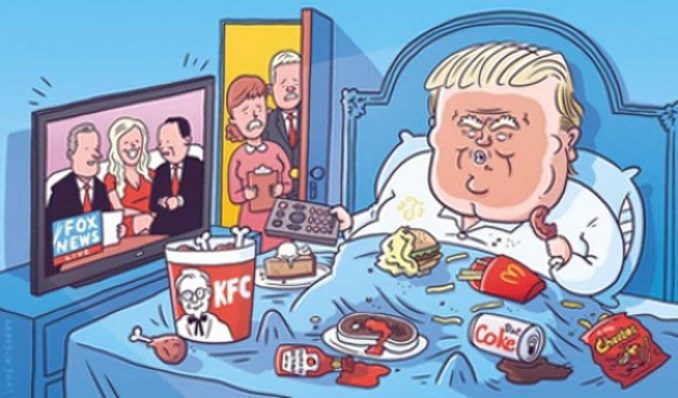 Journalist Michael Wolff’s new book “Fire and Fury” depicts Donald Trump as totally unfit to serve as the chief executive of U.S. imperialism. It describes the Oval Office as a snakepit populated by subordinates and relatives at each other’s throats, but who all have a low opinion of Trump and his abilities. Many, according to Wolff, question his personal and mental capacities.

The publicity given to the book is a clear signal that the capitalist media and many pundits are trying to undermine the Trump presidency. They give great publicity to the quote from Steve Bannon about Donald Trump Jr.’s attendance at a meeting with a Russian lawyer. Bannon called Trump Jr.’s presence “treasonous” and “unpatriotic.”

This may have been Bannon’s way of keeping himself from being indicted by the Mueller Russia investigation, or it may have been driven by ultra-right factionalism. But the widespread coverage of this quote was aimed at breaking up the Trump-Bannon axis, which lasted even after Bannon was fired.

Bannon is an ultra-right ideologue whose aim has been to destroy the political center of the Republican Party. Trump, on the other hand, is a right-wing, racist, misogynistic bigot without any particular ideology. He is a pragmatist known to be easily manipulated, so the bourgeois establishment is pleased at the split caused by the book. They fear Bannon’s influence on Trump more than they fear Trump himself.

Trump, the state and the ruling class

These events raise the question of the relations between the ruling class, its executive in the form of the presidency, and the capitalist state as a whole.

It is a tenet of Marxism that the capitalist government is the executive committee of the ruling class. Its job in general is to enforce the will of the bosses and bankers. When the capitalist class is split, this function can become complex, but the general claim is certainly true. However, Marxism is also dialectical and recognizes contradictions.

On the one hand, Trump is showering the bosses and bankers with riches — billions in tax cuts, gas and oil drilling rights, mining rights on public lands, destruction of environmental regulations, rollbacks of banking regulations and labor protections, etc.

On the other hand, he has taken a hatchet to many long-standing policies of imperialism abroad and capitalism in the U.S. that can do long-term harm to broad ruling-class interests.

In this discussion it is important to distinguish between the advisory establishment to the ruling class and the class itself. The bourgeoisie over the years has created a vast stable of intellectuals who serve different factions of the ruling class.

There are think-tank intellectuals devoted to ferreting out the interests of the imperialists as they see them. There are journalistic scribes with different political lines, depending on which faction of the bourgeoisie and the political establishment they are aligned with. There is a vast array of academic advisers who go back and forth between the universities and the capitalist government.

While various journalists, think-tank bourgeois intellectuals, academic pundits and commentators of all sorts are aghast at Trump as he swings his diplomatic and political wrecking ball, the bosses are focused on the money.

As long as Trump is in the presidency, the bankers and bosses are going to get much of their way with respect to profits, business, money. Under the various Democratic and Republican administrations, they have been chipping away at public land and coastline, at bank regulations, at environmental regulations, etc. But now they are enjoying unusually expanded freedom to plunder the land and the sea. They are exulting in the cuts on corporate taxes, from 35 percent to 21 percent, and billions from other cuts. Whatever Trump’s shortcomings, they can overlook them for now, because the billionaires don’t want the gravy train to stop.

The military-industrial complex — Lockheed, Boeing, Raytheon, United Technologies, etc. — is feeding off the increase in military spending to $700 billion for nuclear weapons, anti-missile systems, new warships, warplanes, drones and missiles as Trump stokes the flames of war with the Democratic People’s Republic of Korea, feeds the Saudi war machine’s assaults on Yemen, ships weapons to Ukraine and positions arms to threaten Russia, China, Iran and other countries.

Military stocks rose to an all-time high when Trump signed a $110 billion arms deal with the bourgeois-feudal monarchy of Saudi Arabia. He has been the arms salesman in chief, pushing offensive missile systems, fighter jets and ships on Japan and South Korea as part of the war buildup against the DPRK.

When the government checks come rolling in to military corporate treasuries, the embarrassments and limitations of Trump can be easily overlooked for the moment. The mass deportations, racist code words, misogyny and sexual harassment, homophobia — all are brushed aside.

It is no coincidence that when the Wolff book came out, Trump quickly made a public announcement that he was opening up the Atlantic, Pacific and Gulf coasts to the oil and gas industry for drilling. The executives of ExxonMobil, Chevron and Conoco were not giving their primary attention to the scandals of the White House at that moment.

Energy Fuels Resources, which mines uranium, got the Trump administration to slash the 1.35-million-acre Bears Ears public area down to 202,000 acres. That put the uranium deposits outside the national monument. Native lands stolen from five different nations were redirected to the private sector by this ruling.

Trump has taken an axe to ruling-class institutions. He has launched attack after attack on the FBI, the crown jewel of the ruling class’s repressive apparatus, in order to discredit the Mueller investigation into his relations with Russia — even though the FBI has ruthlessly carried out the destruction of progressive and revolutionary organizations since World War I.

Trump has also taken an axe to traditional imperialist alliances. He has denounced NATO and demanded that NATO countries pay more for their militaries. He has humiliated the presidents of Mexico, Canada and Australia, among others. He has recognized Jerusalem as the capital of Israel and torn the mask off the U.S. as a “neutral” mediator in the struggle with the Palestinians.

In addition, Trump pulled $1 billion in funding from the United Nations. He pulled out of the Paris climate accord and jettisoned talks for a pact on immigration and asylum.

Reagan administration and the ruling class

When the right-wing government of Ronald Reagan took over in 1981, the majority of the ruling class was deeply concerned. Reagan was the darling of the ultra-right and stood outside the main capitalist establishment as he climbed the political ladder in California. His wing of the Republican Party was at war with the Rockefeller wing.

Reagan started out his term in office by viciously breaking the Professional Air Traffic Controllers Organization. The workers who went on strike were then banned from federal employment for life. It was the first time in decades that such a brutal, premeditated attack was made on a labor union.

This was followed up by a full-scale anti-labor offensive against copper miners in the West, meat packers and Caterpillar workers in the Midwest and more. Reagan and his corporate allies herded scabs in all strikes that took place.

Reagan slashed welfare spending by hundreds of billions, attacked welfare rights and turned the money over to the military for a vast expansion.

At first the ruling class was deeply concerned, not for the workers or the welfare recipients, but from fear of a rebellion from below. But there was no real fightback and the labor leadership not only abandoned the welfare recipients but capitulated to the anti-labor offensive. Reagan got away with it! Then the bosses and bankers and their politicians adjusted to the new normal of reaction. They laughed all the way to the bank.

Trump coming after us — we must come after him

The deep support that Trump is getting from the Republican Party is a reflection of the bosses’ attitude toward him. They are sticking with him in this latest crisis. They have tied their fate to him for now. The Republican congressional gang wants to attack Social Security, Medicaid and Medicare. If they start down this road, they are counting on Trump’s backing.

For political reasons, he may not be so anxious to launch such an attack. But Paul Ryan and the Republicans have not given up on this program at all.

Just as during the Reagan administration, the bosses and bankers are not rushing in to stop Trump — for the moment. They may ultimately unseat him, but for now they are watching to see how much he can get away with. They will stick with him to try and get the last nickel in profits out of his rulings and laws. Until he endangers their profits and their social stability, the ruling class proper, as opposed to their pundits and advisers, will stick with him, whatever his embarrassments, limitations or diplomatic blunders.

What did not happen under Reagan was any fightback. And the Democratic Party is following the same route they did under Reagan: reliance on electoral politics and now the hope that the Mueller investigation will unseat Trump. Even the recent suspension of Temporary Protected Status for 200,000 Salvadorans in this country — on top of denial of protection for tens of thousands of Haitians and Nicaraguans — has not moved the so-called Democratic opposition to fight back.

Mass resistance in the streets, the factories, the retail stores and service industries, the campuses, and the oppressed and immigrant communities is the only way to stop this right-wing wrecking machine.