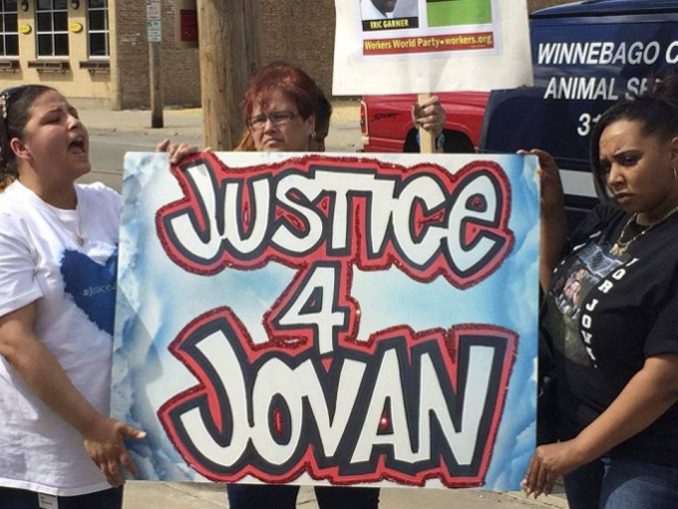 In a gross miscarriage of justice in a courthouse in Rockford, Ill., Winnebago County Judge John Lowry abruptly dismissed murder charges against security guards Ryan Mattingly and Alijon Khalil in the death of Valentia Jovan Fresco. In his Dec. 8 decision, Lowry agreed with their attorney’s claim that the grand jury had been mislead by the prosecution in this case.

This maneuver by the defense was short-lived. On Dec. 13, prosecutors issued repeat indictments for murder and other charges against Mattingly and Khalid. They are to appear in court on Jan. 19.   However, the case will be overseen by the same judge who dismissed the charges.

Jovan, a machine operator for Mid States Production, was gunned down by Metro Enforcement security guards Mattingly and Khalil on April 16, 2016, while celebrating his 34th birthday. His death immediately sparked protests against the security company and the Rockford court system. (See WW coverage May 19, 2016, and June 2, 2016.)

When this murder took place, the local capitalist media quickly released stories attempting to defame Jovan, calling him aggressive.  This was despite the fact that Jovan was attempting to get away from being harassed by Mattingly and Khalil before they beat, tased and fatally shot him in the street.

After three months of demonstrations outside Rockford courthouses and Metro Enforcement facilities by Jovan’s family and their community supporters, charges were finally brought against Mattingly and Khalil in July 2016.  A grand jury charged both of them with first-degree murder, aggravated battery, mob action and unlawful restraint.

The Jovan family’s struggle for justice has resonated throughout the community, as he has not been the first nor the last person of color in Rockford to be gunned down by police officers or private security guards in recent years.

Community members have repeatedly packed courtrooms in solidarity with his family for 18 months.  The capitalist state, always afraid of the power of the people, has changed courtrooms and blocked supporters from entering them, while adding extra security, in attempts to mute the displays of unity with the family.

The dismissal of charges and the media coverage of it, followed by the media whiteout of the continuing case, are aimed at dissolving support for the family and enabling the court to carry out the proceedings behind the backs of the community. However, community supporters will continue to pack the courtrooms to stand with Jovan’s family and demand justice for their loved one.

These developments highlight the need for solidarity between different sectors of the multinational working class. Solidarity is how this struggle initially won indictments — and it is key to strengthening the movement against white supremacy.

Pack the courtroom on Jan. 19!