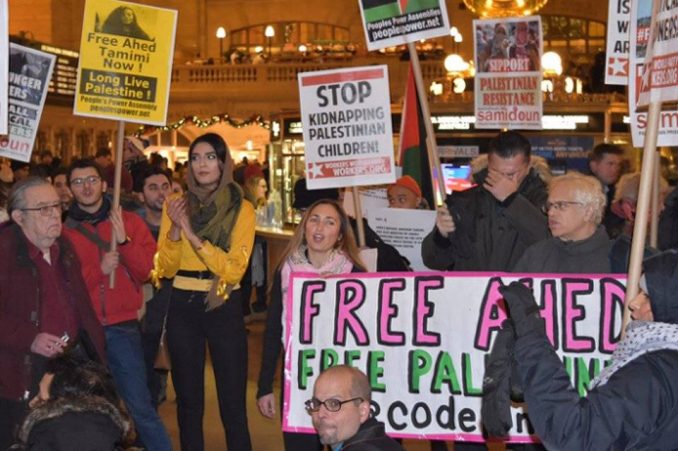 “The young women shown assaulting the soldiers ‘should finish their lives in prison’” was the view expressed by Israeli Education Minister Naftali Bennett on Dec. 20. He was talking about a small group of Palestinian women who confronted heavily armed Israeli soldiers during protests in the West Bank village of Nabi Saleh on Dec. 15. (haaretz.com)

The soldiers had broken into a home, destroying and seizing property and assaulting people. They shot 15-year-old Mohammed Tamimi point-blank, so that the rubber bullet lodged in his skull. Miraculously, he survived after six hours of surgery.

One of those protesting women was 16-year-old Ahed Tamimi, Mohammed’s cousin, who witnessed the shooting. Four days after the protests, she was rousted out of her bed in the middle of the night and arrested for allegedly slapping a soldier. She has been in jail since. Her mother was arrested when she visited Ahed in jail.

On Jan. 2, an Israeli military court indicted Ahed Tamimi on 12 charges. Her father, who endured years in an Israeli prison, says she faces years, perhaps decades, in prison. “Her fate is now in the hands of people who don’t even see Palestinians as full human beings,” he said. (Aljazeera.com, Jan. 2)

Ahed Tamimi has a record of struggle for the Palestinian cause. In 2015, she was photographed biting the hand of an Israeli soldier trying to arrest a 12-year-old, which helped win his release.

‘Identity planted in the struggle’

Tamimi has no lack of eloquence: “We may be victims of the Israeli regime, but we are just as proud of our choice to fight for our cause, despite the known cost,” she said at a meeting in South Africa last August. “We knew where this path would lead us, but our identity, as a people and as individuals, is planted in the struggle, and draws its inspiration from there.

“Beyond the suffering and daily oppression of the prisoners, the wounded and the killed, we also know the tremendous power that comes from belonging to a resistance movement; the dedication, the love, the small sublime moments that come from the choice to shatter the invisible walls of passivity.

“I don’t want to be perceived as a victim, and I won’t give their actions the power to define who I am and what I’ll be,” she asserted. (haaretz.com, Dec. 31)

The Trump regime’s decision to move its embassy to Jerusalem and declare that city Israel’s capital — which enables the settler state’s relentless campaign of destruction — has sparked a new wave of resistance, particularly by Palestinian youth.

Over 600 Palestinians have been arrested for protesting Trump’s action, including at least 170 children. However, these demonstrations, like the case of Ahed Tamimi, have received little coverage by U.S. corporate media. Wall Street’s reliance on Israel as the chief guardian of the oil monopolies’ interests motivates their stony silence toward the Palestinian people’s plight and their heroic struggle.

The Palestinian struggle has struck a chord among Israeli youth, just as the heroic Vietnamese liberation struggle inspired U.S. youth to face jail or exile rather than fight the Pentagon’s war. According to Haaretz, a group of 63 high school students have publicly declared they will refuse to be drafted into the Israeli Defense Force.

“We have decided not to take part in the occupation and oppression of the Palestinian people,” they wrote in a letter sent to Prime Minister Benjamin Netanyahu, Chief of Staff Gadi Eizenkot, and the defense and education ministers. “The ‘temporary’ situation has dragged on for 50 years, and we will not go on lending a hand. … The army is carrying out the government’s racist policy, which violates basic human rights and executes one law for Israelis and another law for Palestinians on the same territory.”

The students also protested “intentional institutional incitement against Palestinians on both sides of the Green Line” (referring to the 1949 armistice line separating Israel from the West Bank), “and we here — draft-age boys and girls from different areas of the country and from different socioeconomic backgrounds — refuse to believe the system of incitement and to participate in the government’s arm of oppression and occupation.”

The signatories include Matan Helman, 20, of Kibbutz Haogen, who is serving jail time because of his refusal to be drafted into the army.

The IDF is working on a plan to increase the number of draftees for combat service. Currently, enlistment rates are sinking and dropout rates stand at over 7,000 soldiers annually.