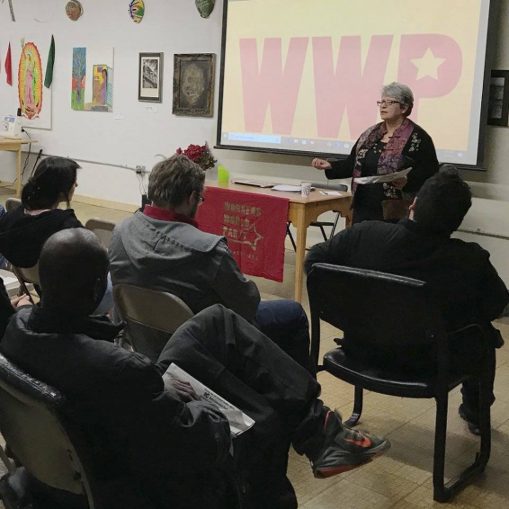 Workers World Party can thank misogynist, white supremacist Donald Trump for one thing and one thing only: The 45th has dramatically exposed and sharpened the contradictions of capitalism and spurred on great interest in the class struggle among new layers of the workers and oppressed.

Trump, despite his shenanigans and being a “f—ing moron,” is still very much carrying out the bidding of Wall Street and the Pentagon. As a result, more and more people have decided to join the fight against capitalism.

San Antonio, Texas, is no different.

Workers World Party is excited to announce that four months ago a new branch of our party officially opened in San Antonio.

One new member, Irasema Cavazos, program director of Domesticas Unidas SA, told WW: “These are trying times for the poor, women, people of color, immigrants, workers and students who are being oppressed. Even our planet suffers due to the capitalist system.

The WWP San Antonio branch will be at the upcoming MLK event with newspapers and leaflets to show its complete solidarity with the Black community of the city, the state and the country.

A main part of San Antonio’s sordid history is the story of colonization and racism. Spanish colonial missions, established in the early 1700s, were used to conquer and destroy the Indigenous population of Tejas (the Indigenous name for the area). Texas was still part of colonial Mexico at that time.

Then U.S. imperialism robbed Mexico of Texas and several neighboring parts of the Southwest, with the 1848 Treaty of Guadalupe Hidalgo sealing the theft. Extending the colonial past into a contemporary method of domination, the U.S. established military bases on some of the colonial missions. These have remained for generations, giving San Antonio the infamous and unfortunate mainstream name, “Military City, USA.”

But this colonial and military presence does not tell the whole story of San Antonio. It also has a rich history of struggle.

As another new member of the party, Duke Jay, pointed out: “A city known best for its temple to white settler colonialism [the “pinche” Alamo — TG] deserves a proper Marxist/Leninist party led by Chicanx and Black voices that can decolonize as well combat the forces of gentrification, worker abuse, sexism and anti-LGBTQ oppression.

“Oppressed people are ready for a real, organized left party, not bogged down in entryism for an irredeemably imperialist Democratic Party, or scattershot in strategy and purpose. WWP is uniquely positioned to provide this, to channel these revolutionary conditions into a workers’ party led by people of color that provides victories for oppressed San Antonians, while connecting these struggles with Venezuela and Palestine and elsewhere.”

Eddie Barrera, a young queer Chicanx activist who just joined the party, confirmed this view, stating: “The Southern and Southwestern states are starving for a Marxist-Leninist presence, and what better presence than a party that has been fighting injustice, inequality and racism for over 50 years! As a majority Chicanx city, San Antonio needs a revolutionary party that will fight against rampant gentrification and racist immigration policies.”

The WWP center, based out of New York City, is committed to supporting this vital new branch. The center recog­nizes that if revolutionary fervor can spring out in one of the most reactionary racist settler states, it will spring from every corner of this country to crush capitalism once and for all.

WWP has a long history of uniting the struggle against racism aimed at Brown people with the struggle of Black people. Its Black leadership throughout the country has supported im/migrant rights, and its Brown cadre stands in unconditional defense of the Black Lives Matter movement. The party understands that supporting the struggle of people of color in the U.S. is the only road to victory and the only road that will free all workers.

Taking that view, capitalism indeed is at a dead end.