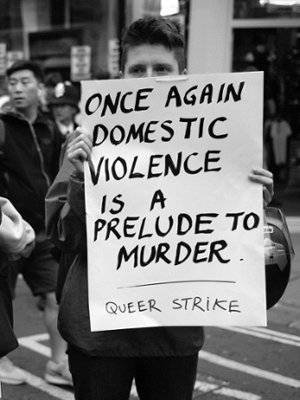 After Devin P. Kelley murdered 26 people and wounded 20 others in a Texas church on Nov. 5,  the media reported studies showing a clear correlation between mass murders and domestic violence.

Kelley had been found guilty of kicking, beating, choking and constantly threatening his first spouse with a loaded gun (with which he also fractured his toddler stepson’s skull) in an Air Force court-martial in 2012.  He was sentenced to a year in military prison and given a bad conduct discharge in 2014.

Over the intervening years Kelley was repeatedly investigated for violence against women and even charged with sexually assaulting and raping a woman. He was also known to brutally attack his dog. What precipitated his carrying out the assault at the church using a military style semi-automatic rifle was an argument with his current mother-in-law who was a member there.

However, because of the Lautenberg Amendment passed in 1997, Kelley should have been prohibited from purchasing or possessing guns and ammunition due to his domestic violence conviction. But the Air Force — whether through deliberate neglect or routine omission — failed to record his conviction in the FBI National Crime Information Center database. Those statistics are used by the National Instant Check System to flag prohibited purchases and lead to follow-up investigations. So Kelley slipped through the cracks and was free to act out his cruel, misdirected rage.

There is a glaringly consistent pattern of domestic violence by mass killers that has not been reported until now.  This applies to Omar Mateen, who killed 49 people and wounded 58 at the Orlando Pulse nightclub in June 2016; Tamerian Tsarnaev, whose bomb at the Boston Marathon in April 2013 killed three and injured 264; and Adam Lanza, who killed his mother before entering the Sandy Hook Elementary School in Newtown, Conn., where he killed 2o children between the ages of 6 and 7 and six adults in December 2012. Nine of the 10 deadliest mass killings in the U.S. in the past 50 years were perpetrated by men with histories of domestic violence. (Village Voice, Nov. 8)

A 2014 study by Everytown for Gun Safety showed that 59 percent of the 100-plus mass shootings (where four or more people were killed)  in the U.S. between January 2009 and June 2014 involved the murder of an intimate partner or family member.

A deadly pattern of misogyny

Yet it took the tragedy in a Texas church on a Sunday morning to expose the deadly connection between mass murder and age-old misogyny — one of the pillars of capitalism that drives U.S. society.

While such statistics have been around since the 1990s, they are not well-known, even by those who follow the movement for women’s liberation. It took years of struggle, beginning in the 1970s when women first set up battered women’s shelters, to see that the federal Violence Against Women Act was passed in 1994 and updated in 2013 to include same-sex relationships and visas for battered immigrants. However, the VAWA is woefully inadequate and viciously racist in how it is currently applied.

The critical factor is if there is a gun in the home. According to a study published by the U.S. Department of Justice in 2004, which compared abused women who were murdered by a partner and those who survived partner abuse, the presence of a gun more than triples the risk of death in a domestic violence situation.

Ironically, which families have the highest rate of domestic abuse? According to two studies cited by the National Center for Women and Policing, at least 40 percent of families headed by police experience domestic violence in contrast to 10 percent of other families. The NCWP states: “Victims of police family violence typically fear that the responding officers will side with their abuser and fail to properly investigate or document the crime.”

The 2012 jailing of Marissa Alexander, an African-American mother of three, for firing a warning shot at her abusive spouse who was threatening her life, is Exhibit A of why that is not a paranoid fear and how the VAWA can be turned upside down.

While here are many socioeconomic conditions and widely accepted cultural behaviors that lead to domestic abuse, in addition to racist, gendered and class oppression, there is no question that the solution will not come under capitalism. In fact, if the predator in chief in the White House has his way, domestic abuse and its link to mass killings will only increase. In the first round of proposed budget cuts, Trump put 25 grants exploring ways to prevent violence against women on the chopping block.

But the good news is that the current spotlight on domestic violence and mass murders coincides with an upsurge in activism against sexual harassment and misconduct in the workplace. They are two sides of the same patriarchal coin.  A coin that needs to be tossed into the cesspool of sexist history, along with all other manifestations of toxic capitalism.

This is the first of several articles about domestic violence in the U.S.