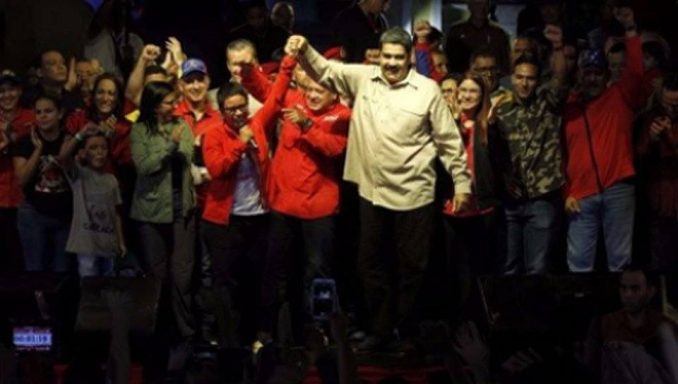 In a stunning victory for Bolivarian Venezuela, the United Socialist Party of Venezuela (PSUV) won municipal elections in 23 of the 24 state capitals and the governorship in the state of Zulia on Dec. 10. “Overall, the PSUV and allies took 308 of the 335 municipalities up for grabs in Sunday’s election,” said TeleSUR that day.

This is the third election in six months in Venezuela.  Each one has resulted in a victory for the PSUV, which is led by President Nicolás Maduro. In a country of 19.7 million eligible voters, more than 47 percent — over 9.1 million people — participated in the election. “There is an extraordinary electoral participation.  I want to thank the people of Venezuela who have come to the voting centers to exercise their right to vote,” said Maduro in the same article.

The people of Venezuela have once again shown their defiance and solidarity in the face of severe economic sanctions, and even threats of military intervention by U.S. imperialism, led by the gangster Trump regime.  Why?

Since Maduro’s predecessor, Hugo Chávez, was elected president in 1998, the Venezuelan government has strived to use oil revenues to better the lives of workers and poor people. The poverty and unemployment rates have been sharply reduced. Wages have risen, and so has enrollment in free colleges. The public housing program has been overhauled and improved. Millions more began to receive pensions. The government put controls on prices of basic household and food items, making them much more affordable.

The rich in Venezuela and their U.S. oil company patrons hate these reforms. In the last few years, the wealthy have hoarded commodities, set up a large illegal market and shipped essential goods out of the country to sell abroad at much higher prices. Meanwhile, U.S. banks have moved to block Venezuela’s transactions on the world financial market.

At the same time, the U.S. government, under the George W. Bush and Barack Obama administrations, imposed harsh sanctions against government leaders and then against the entire country. This has intensified under the Trump government, causing even greater hardships for the Venezuelan masses.

In tune with the U.S. capitalist class, the right wing in Venezuela mobilized against the Bolivarian government and won a parliamentary election in 2015. In response — and in accordance with the country’s constitution — the Maduro government organized and held an election for the Peoples Assembly. This far more democratic body represents all sectors of society — urban and rural workers, poor people, women, LGBTQ individuals, Indigenous communities and others previously under represented.

Since that time, in every election — despite economic sabotage, violent street attacks, right-wing calls for the Venezuelan military to conduct a coup and Pentagon “war games” near the country’s borders —  working-class and poor communities have backed the Bolivarian government and strongly support their leaders.

Progressive people around the world, and particularly those in the U.S., should show solidarity with their Venezuelan sisters and brothers at every opportunity and strongly oppose imperialist intervention, whether overt or covert.