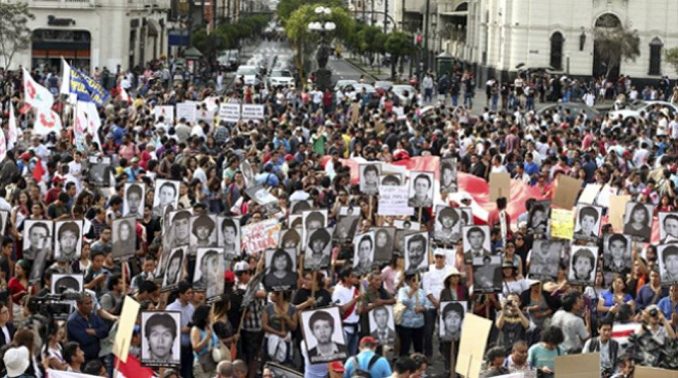 That night — Christmas eve – hundreds poured into the streets of Lima and other cities to denounce the pardon and declare “¡Fujimori Nunca Más!” — “Fujimori never again!” — and “Out, out, PPK!” calling for the current president’s resignation. (Reuters, Dec. 27)

The Lima protesters, joined by thousands more the next day, were attacked  by riot police with tear gas and truncheons as they marched toward the hospital where Fujimori was staying. He was pardoned supposedly on “humanitarian” grounds of ill health. Victims’ families and human rights organizations announced plans Dec. 27 to challenge the pardon in court. (soychile.cl, Dec. 31)

On Dec. 28, more than 20,000 people, led by families of the massacred and “disappeared” carrying photos of their loved ones, marched in Lima, joined by thousands more in Cuzco, Ayacucho, Piura, Cajamarca, Chimbote, Huancayo, Puno and other cities throughout Peru. (La Radio del Sur, Dec. 29) Protests were also held across Latin America, in Madrid and New York.

“We will march until the pardon is annulled and Kuczynski resigns,” vowed Marco Arana of the Broad Front. (teleSUR, Dec. 29)

“PPK has never invited us — the families of his victims — to visit him as he has Keiko and Kenji [Fujimori’s children, leaders of the far-right Fuerza Popular party],” explained Carmen Oyague, whose daughter was one of nine students and a professor kidnapped and murdered in 1992.” (The Guardian, Dec. 29)

Kuczynski was narrowly elected in 2016 with support of some progressive forces who viewed him as the “lesser evil” against opponent Keiko Fujimori. During the campaign he pledged not to pardon the ex-president.

Fujimori served less than half of a 25-year jail sentence for crimes against humanity. Contrast his treatment with that of leading leftist political prisoners.

Abimael Guzmán of the Communist Party of Peru–Sendero Luminoso (PCP-SL) and Victor Polay of the Tupac Amaru Revolutionary Movement (MRTA) have been held in near total isolation in an isolated naval prison for more than 25 years.

Crimes of Fujimori and imperialism

Alberto Fujimori came to power in 1990 with a mandate from Wall Street to enact draconian International Monetary Fund austerity measures, privatize the economy and crush the growing liberation movements.

The crimes of Fujimori, the Peruvian ruling class and U.S. imperialism were documented in the pages of Workers World throughout the 1990s.

In early 1992, Fujimori and his military/police allies carried out a so-called auto-coup, suspending the Constitution, dismissing Congress and the courts, and implementing martial law throughout the country.

Little more than a month later, he ordered the massacre of more than 400 political prisoners at Canto Grande prison outside Lima.

U.S. military special forces intervened directly in the civil war under the guise of the “war on drugs.” Washington’s intelligence agencies participated in the capture of revolutionary leaders.

Peruvian industries nationalized under left-nationalist military governments in the 1960s and 1970s were sold off at cut-rate prices to Western and Japanese monopolies and in exchange for massive military aid from both Republican and Democratic U.S. administrations.

Thousands of political activists and suspected “sympathizers” with the armed resistance struggle were imprisoned. They were convicted by military courts where judges wore hoods to hide their identities and where defendants had no right to defend themselves. Many prisoners were tortured. Thousands more were simply “disappeared.”

Death squads targeted Indigenous villages in the Andes and impoverished shanty towns around Lima from which the guerrilla movements drew support. Mass graves are still being uncovered today.

Fujimori also enacted a forced sterilization program against 300,000 Indigenous and poor women between 1996 and 2000, based on an earlier U.S. program in Puerto Rico.

In April 1997, Fujimori ordered the massacre of MRTA guerrillas who had occupied the Japanese Embassy in Lima to draw attention to the plight of political prisoners.

Fujimori’s pardon now is a symptom of a U.S.-inspired right-wing offensive to roll back Venezuela’s Bolivarian Revolution and the progressive governments and movements it has inspired throughout Latin America.

But the Peruvian people taking to the streets are showing the world they will not accept this without a fight.