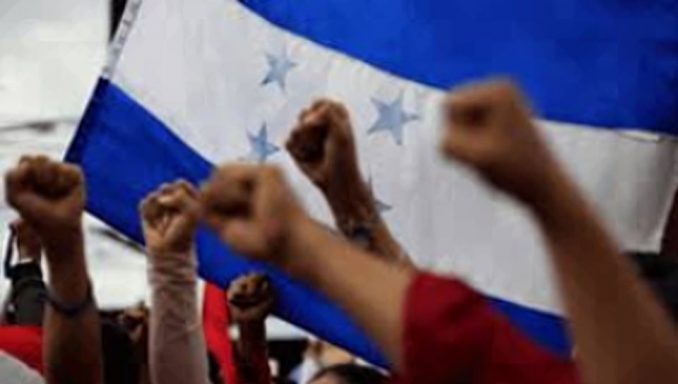 Jan. 1 — Hondurans have been in the streets risking their lives to protest fraud in the recent presidential election in their country. But the U.S. government congratulated the regime of Juan Orlando Hernández, which refuses to concede its loss to people’s candidate Salvador Nasrallah. Corporate U.S. and European media have barely reported a word of the government’s slaughter of dozens of people in the protests.

To bring the facts to our readers, Workers World has selected parts of recent interviews with people on the ground in Honduras.

WW sources include a Dec. 28 interview from the German newspaper Junge Welt with Berta Zúñiga Cáceres, a spokeswoman for the Indigenous organization COPINH (Civil Council of Indigenous and Popular Organizations of Honduras) and daughter of Berta Cáceres, one of the founders of COPINH, who was murdered last year.

Real News Network spoke on Dec. 15 with Gerardo Torres, the international coordinator of the Opposition Alliance Against the Dictatorship, and with Dr. Luther Castillo, a Garifuna physician and former vice minister in the Department of Health under the former president of Honduras, Manuel Zelaya.

And on Dec. 26, Democracy Now interviewed Allan Nairn, who has been reporting directly from the Honduran capital city, Tegucigalpa.

All the commentators agreed with what Berta Zúñiga Cáceres said: “It is obvious that there was an electoral fraud … because the electoral system is part of the government apparatus and its networks.”

She added, “For the population, the current political conflict is dangerous, because the government disrespects the Constitution and the laws of the Republic. But despite the attempted coup d’état and the militarization of the conflict, the population continues to take to the streets. Especially for the Indigenous peoples, who see themselves as not represented in any political party, it is immensely important to resolutely oppose the government’s ‘Continue as before!’”

Torres estimated: “We have more than 55 people killed. … We know that they have been murdered all around Honduras. If this were happening in another country, Venezuela is the most likely example, or Nicaragua, or El Salvador, then they [the international bodies] would have already taken a stronger action.

“They see people being killed in Honduras. Yesterday they killed a little girl and little boys. And they tell that we are the violent ones because some people throw rocks and people defend themselves while the military are shooting unarmed innocent people.”

The people can fight for themselves

Castillo: “As part of the people’s movement, as part of the coalition of grassroots movement, we expect nothing from the OAS [Organization of American States]. And we know that only people can save the people. Our people in the street can fight for themselves.”

“This is bigger than the opposition, than the Alliance. This is the people’s movement. The biggest difference between this and 2009? Today there are young people in the street.”

Torres: “They stopped a really good process that President Zelaya had in 2009, they violently stopped it. And now it’s our time to stop the dictatorship and to start again in the process for building democracy, of building confidence in our government, and of building new ways of development in Honduras.

“This is a political problem, this is a new coup, but now, as Mr. Castillo said, we are not the same people that we were in 2009. We have lived eight years under a dictatorship, and we are willing and ready to end it.”

Castillo: “What I am sure of today is that we’re going to fight. As a social movement we are not even thinking about a new election. We are thinking about the fight for our rights. Even our people who have been killed in the street give us more energy, more commitment to continue fighting for their dreams.

“And we are ready, we are mobilized more than ever in the history of our country. We took the street in more than 158 separate places in the last weeks. And fighting with our hands, with our bodies, with nothing, with our consciousness, with our heart to build a new country against the tear gas, against the ballot of the dictatorship, against all this. With the blood of our people in the street.

“They kill one, we take them home. We say, ‘Go in peace,’ and we continue fighting for them.”

The fight for the military

Nairn called the popular struggle “an intifada of Hondurans against election fraud. But, more deeply, it’s a class uprising against an oligarchy that the U.S. has been backing for decades. The U.S. first used it in the 1980s to stage the Contra attack against Nicaragua. Honduras was their base. Now they say it’s being used for the drug war.

“But it’s a de facto U.S. military occupation of Honduras, in a sense, since the U.S. has an actual base there, even though foreign bases are prohibited by the Honduran Constitution.”

Nairn also mentioned that “unlike in Israel, where the army is deeply ideological, fully indoctrinated to the project of the government, in Honduras it’s only certain sectors of the army and the police that have that character. I talked to many, many dozens of army and police, and it’s clear that many of them don’t really like being dragged along on a reimposition of the Hernández government.”