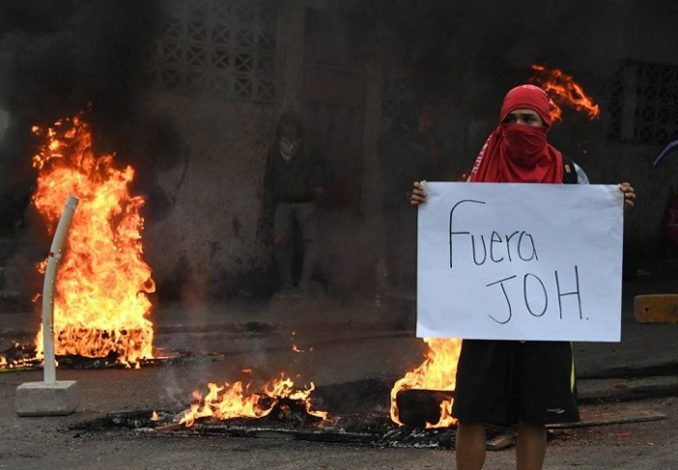 In Tegucigalpa on Dec. 15, a supporter of Salvador Nasralla, presidential candidate of the Opposition Alliance Against Dictatorship, ordering “out” the current president, Juan Orlando Hernández, during massive country-wide demonstrations.

Three weeks after Hondurans voted in the country’s quadrennial presidential election, the struggle over flagrant electoral fraud is still at a fever pitch. The people have taken to the streets to demand, “Fuera JOH — JOH Out!” JOH is the hated current president, Juan Orlando Hernández, whose hand-picked Supreme Electoral Tribunal (TSE) has declared him president-elect despite clear indications that opposition candidate Salvador Nasralla was the largest vote-getter.

At least 120 separate demonstrations throughout the country, from the capital Tegucigalpa to remote rural parts, have shown no letup in the resistance. A “stoppage” called for Dec. 15 was deemed hugely successful. Sections of the police have so far refused to attack protesters or enforce a curfew, instead mingling with the people in the streets.

Worried bourgeois commentators here describe a nation “in flames.” All over the country the masses are blocking major thoroughfares with burning barricades. Police and military vehicles have been torched.

The TSE’s announcement in favor of Hernández, which it finally made official on Dec. 17 after supposedly recounting a token percentage of votes in order to appear objective, provoked this new wave of militant mass protests.

Hondurans realized the election was about to be stolen from them when, after 70 percent of the votes had been counted and the TSE reported a 5 percent lead by Nasrallah over Hernández, the TSE suspended the count for a whole day, citing dubious technical issues. When the counting resumed, the president somehow managed to come out ahead. Statistically this was unlikely, if not impossible.

Fresh in Honduran memory is the “election” of 2013, marked by voter suppression, tampering with results and violence against the LIBRE (Liberty and Refoundation) Party. At that time Hernández’s right-wing National Party stole the presidency from LIBRE candidate and front-runner Xiomara Castro de Zelaya, the spouse of Mel Zelaya, who had been deposed in 2009 in a U.S.-backed coup. President Zelaya had been taking measures to reduce income inequality and improve the lives of poor and working-class Hondurans.

In the current election, Castro de Zelaya was Nasralla’s running mate on the ticket of the Opposition Alliance Against the Dictatorship — a coalition of LIBRE, Nasralla’s Anti-Corruption Party, and the Party of Innovation and Unity.

Despite the proclaimed defiance of some police units, repression has been brutal. U.S.-trained forces use live ammunition against demonstrators. The Committee of Families of Disappeared (COFADEH) reports at least 20 people have died in the past three weeks. Hundreds have been injured by bullets and clubbings; protests are routinely tear gassed. At least 800 have been arrested or detained.

A bus with members of the Council of Popular and Indigenous Organizations of Honduras (COPINH) was blocked from reaching a mass demonstration on Dec. 12. COPINH has been fighting to defend Indigenous land and water against foreign mining interests. On March 2, 2016, COPINH’s beloved leader, Berta Cáceres, was assassinated. The bus delegation was led by Cáceres’ daughter, Bertha Zúñiga Cáceres.

Unknown saboteurs on Dec. 10 took down the transmission antenna for Radio Progreso, one of the few media sources getting out the truth in Honduras. Since then, broadcasts have been halted. As described by director of Radio Progreso, Jesuit Father Ismael Moreno Coto — better known as Padre Melo: “We already verified that it was not an action of the weather or the winds. We have precise data that what holds the tower was previously unscrewed, which caused the antenna to split into three pieces. There were external hands, criminal hands, that proceeded to create the conditions for the tower to fall.” (Giorgio Trucchi, rebelion.org, Dec. 16)

As with the previous U.S. administration, the government in Washington is playing a criminal role in suppressing the democratic will of the Honduran masses. Trump wasted no time in recognizing JOH as Honduran president. Mel Zelaya has denounced the role of U.S. Chargé d’Affaires Heide Fulton in facilitating “spurious recounting, vote by vote, of electoral documents that all Honduran people know have been adulterated.”

Nasralla and Zelaya have both blasted attempts by the Organization of American States to split the opposition by insisting Nasralla “disengages completely from former President Zelaya because he’s a supporter of Chávez and promotes Democratic Socialism.” Zelaya called on the people “to fight every day without rest.” (Rights Action, Dec. 14)

Grevatt was a member of an International Action Center team of Human Rights Observers that witnessed the electoral coup of 2013.