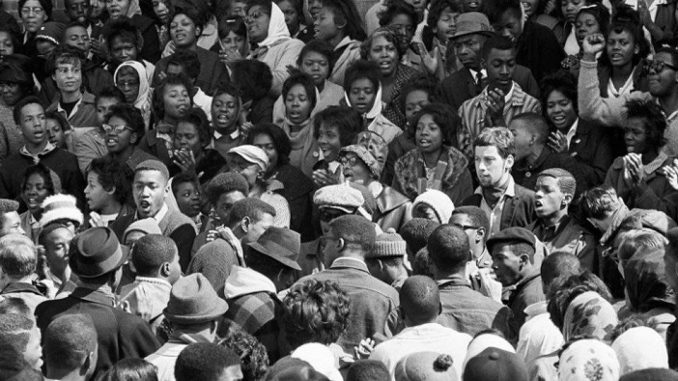 The following is excerpted from an earlier article that dealt in more detail with Moore’s extreme right-wing politics.

President Trump traveled to Pensacola, Fla., on Dec. 8 for a get-out-the-vote rally for white supremacist Judge Roy Moore, the Republican running for the U.S. Senate in nearby Alabama. Despite this, Moore lost to his Democratic opponent, Doug Jones, appointed a U.S. Attorney for the Northern District of Alabama by former President Bill Clinton during the 1990s. At the Pensacola meeting, just 25 miles from the Alabama border, Trump urged participants to vote for Moore on Dec. 12.

This event was held in the aftermath of a visit to Alabama by Trump’s chief strategist, Steve Bannon, to campaign for Moore. Bannon, who left the White House in recent months, then returned to the “alt-right” publication Breitbart News.

African-American voters played a pivotal role in the defeat of Moore. The division within the white electorate and the overwhelming support of African-American and Latinx voters resulted in the narrow victory by Jones of approximately 1.5 percent.

With the recent defeats of Republican candidates in Virginia and Alabama, the Democratic electorate has been reinvigorated. However, this will not automatically translate into a greater commitment on the part of the U.S. ruling class and state structures for the full realization of the demands of the African-American people

Interestingly enough, initial reports indicate that a larger percentage of African Americans turned out to vote for Jones than they did for Hillary Clinton in the 2016 presidential race that brought Trump to power. Clinton was unable to inspire the necessary enthusiasm among nationally oppressed groups, resulting in her monumental defeat in the Electoral College.

Consequently, independent political direction is still required for further progress aimed at full equality and self-determination. Even with Trump’s blatant racist pandering to an ever-shrinking political base, where his approval rating has sunk to an abysmal 32 percent, the Democratic Party as a whole is providing no real program to mobilize the African-American people. …

At any rate, Trump is being revealed as a failed president. Even the conservative USA Today newspaper, in an editorial published on Dec. 14, said that he is unfit for office.

Moreover, as it relates to the overall status of African-American people, bloc voting, direct action and mass mobilizations have been used effectively as tactics since the middle 20th century to achieve short-term goals, both on a symbolic and on a substantive level.

The necessary fundamental transformation of the economy and political superstructure can only be achieved through independent revolutionary organization designed to create a new social order based on the acquisition of a genuinely egalitarian society.