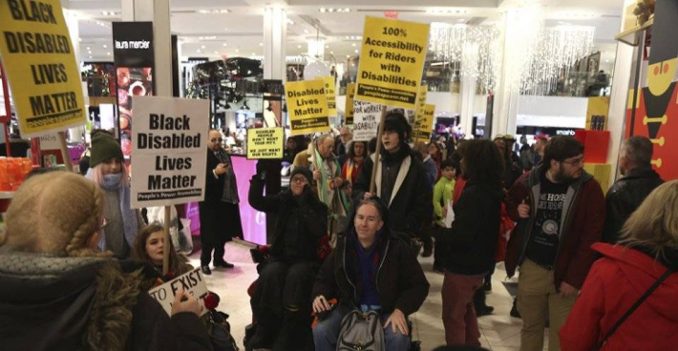 New York — The People’s Power Assembly and wheelchair users led a protest on Dec. 3 that gathered in New York’s Herald Square to celebrate the International Day of Persons with Disabilities. Then activists streamed through Macy’s department store on ramps between the floors.

Moving through the aisles, protesters wound around until they reached a sizable clear space where they held an impromptu indoor rally to make people aware of the difficulties faced by people with disabilities. Their signs and chants raised many slogans. One demand was “Equal pay for equal work” because employers are legally allowed to pay disabled workers a subminimum wage using waivers created under the so-called “Fair” Labor Standards Act of 1938.

Other slogans were “Disabled Lives Matter” and “Black Lives Matter.” That’s because 51 percent of those gunned down by police are disabled and a disproportionate number of people killed by police are African Americans. Another demand, “Access is a right,” is crucial because only 20 percent of New York’s subway stations have elevators. Importantly, “Kill the tax bill” was also a focal point because Trump’s tax “reform” bill would cut medical benefits for people with disabilities.

The protesters held other impromptu rallies in the store. Five speakers addressed sympathetic shoppers to explain why they were there. Security guards looked on and stayed out of the way, backs pressed against the wall.

Then, demonstrators walked or rolled in wheelchairs across the busy intersection outside Macy’s to Pennsylvania Station, where they again chanted and held brief street meetings. Travelers who were waiting for trains stood around to listen, building small crowds.

Activists explained and showed what problems people with disabilities face. They rode the elevator down one floor to the train tracks and discovered that one of the two elevators there was out of service. So on the way back, only two people in wheelchairs could ride at a time. One woman left the group because she had once been trapped inside an elevator and didn’t trust them.

People with disabilities have to allow extra time to travel. They say they need a 36-hour day!

Kaessinger is a wheelchair user.