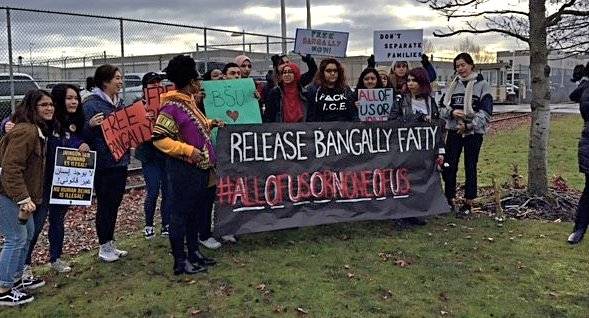 Tacoma, Wash. — The increase in Immigration and Customs Enforcement raids and detentions has led to an increase in resistance to the Trump/ICE reign of terror against immigrant workers. All through 2017, due to the struggles of immigrant prisoners themselves, many people have come out against the raids, detentions and deportations.

At the Northwest Detention Center (NWDC) in Tacoma, prisoners have held hunger strikes against inhumane conditions almost all year long. In fact, prisoners held seven hunger strikes in 2017, with the last one ending in early December. At one point in the spring there were 750 prisoners on strike. At NORCOR (Northern Oregon Regional Corrections Facilities), a newer immigrant detention prison in The Dalles, there were two strikes this year.

All the strikes have been for the most basic survival reasons: for decent food, health care, legal representation and against racist treatment, deportations and slave wages of a dollar a day for prisoner labor. The hunger strikes have been labor strikes as well.

The striking prisoners have been represented on the outside by the Northwest Detention Center Resistance. The organization gives the prisoners’ demands to the news media and also organizes protests against the prison administration’s attacks on prisoners, such as solitary confinement, transferring prisoners arbitrarily, threats of forced feeding, etc. The NWDCR has helped the prisoners produce the Hunger Strikers Handbook — an organizing tool available at hungerstrikershandbook.org.

Many other solidarity groups on “the outside” participate. The International Action Center has been picketing the NWDC monthly for over 10 years.

A group of 120 protesting students from the University of Washington in Seattle descended on the prison from a bus and a number of cars on Nov. 28. They held a rally demanding the release of fellow student Bangally Fatty from Gambia. Fatty, the father of an infant child, was a victim of labor trafficking when he moved to the U.S. and has applied for a special visa. As students demanded his release, those that could get inside the prison went to Fatty’s bond hearing, but his release was denied.

Outside the prison, which is owned by Geo, a for-profit prison corporation, several university professors and activists gave the students a teach-in on the issues of mass incarceration and criminalization. One professor revealed that the prison was located on a toxic superfund site. A huge slag pile of toxic material, dumped in the prison’s backyard when the facility opened in the early 2000s, has been charged with making many of the prisoners sick.

This was one of many rallies that have been held at the detention center this year. There are growing calls for the city of Tacoma to end its contract with Geo. Spurred by prisoners’ protests, Washington state Attorney General Robert Ferguson has actually gone to court to demand Geo pay the prisoners the state minimum wage.