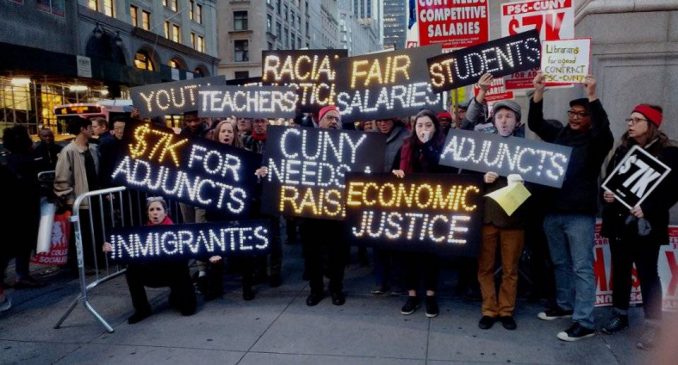 Holding a huge, electrified banner reading “Resist austerity,” while chanting to the rhythm of a brass band, hundreds of members of the Professional Staff Congress marched from the Graduate Center of the City University of New York to a board of trustees’ meeting at Baruch College on Dec. 4. They were making it clear that they do not want to wait six years for a new contract to get significant pay raises.

In particular, the PSC wants adjuncts — the part-time instructors who do over 50 percent of the instruction at CUNY — to get a pay increase to a minimum of $7,000 per class. Currently, the best-paid adjuncts get about $4,500 per class.

The PSC represents about 30,000 full-time and part-time teachers, as well as professional staff — librarians, registrars and computer programmers — who educate 500,000 students at CUNY. It took six years for the board of trustees to agree to its last contract with the PSC.

A noticeable feature of the protest was the significant support given fast food workers who are organizing a union at seven CUNY campuses with the support of the Department Store Union (RWDSU).