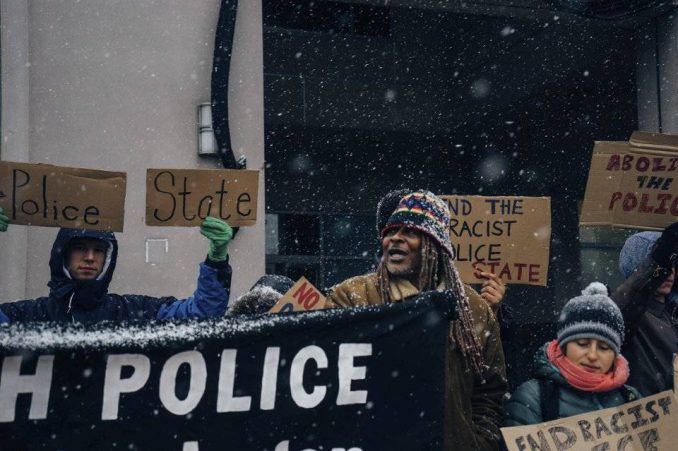 Baltimore police are ‘too corrupt to be reformed.’

Dozens of Baltimore activists and locals congregated Dec. 9 outside the Baltimore Police Department headquarters at 601 Fayette St. Despite windy, snowy conditions, the Baltimore People’s Power Assembly, Baltimore Workers World Party, Johns Hopkins Students for a Democratic Society, Greater Baltimore Democratic Socialists of America and a radical Jewish students’ group at Hopkins gathered to stand against the police and their corruption.

In the wake of the killing of BPD Detective Sean Suiter, concerns have been raised by many that the killing was an “inside job.” The detective was killed the day before he was slated to testify on a panel about a notorious, deeply corrupt Baltimore police unit, the Gun Trace Task Force. Many believe the killing took place under suspicious circumstances. (tinyurl.com/ybedm3jl)

Furthermore, in the wake of the killing, the Baltimore police placed a neighborhood, Harlem Park, under occupation, demanding identification from residents every time they came and went. (tinyurl.com/y7nvr6w9)

In light of the police occupation and the questionable circumstances in which Suiter was killed, Sharon Black, on behalf of WWP and the PPA, called for disbanding the Baltimore Police Department, stating that it is too corrupt to be reformed. The PPA is also calling for restitution for Harlem Park residents who were negatively affected by the police occupation.

Andrew Mayton of WWP expressed the fact that police abolition can only truly occur after the abolition of capitalism. Alec Summerfield of WWP drove home the parallel between the Israeli occupation of Palestine and the police occupation of Baltimore, pointing out that the BPD uses Israeli technology.

The police watched the spirited demonstrators from the front steps of the police headquarters, but did not intervene. This was not a one-time protest, organizers asserted, but the start of a bigger campaign in the fight against police corruption. “When people are occupied, resistance is justified.” From Gaza to Baltimore, the fight continues.