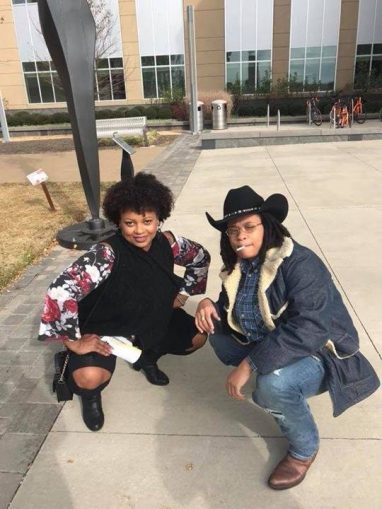 These last few months have been a flurry of emotions. Watching my daughter leaves me in awe, because she embodies everything and more that I would like to see her be in life. She is brilliant, articulate, responsible and caring. She loves her Blackness and her Queerness, and she has a passion that drives her to be the best person in society that she can be.

She helps me to be a better Mom, and for that I’m grateful. She helped lead me to Workers World Party, and now I’m a candidate. So I’m not just her Mom, I’m her comrade. We are on the same team to call out white supremacy and the ways that it permeates our lives.

She was the first to be arrested for her alleged crime against a statue. However, the Nazis in Charlottesville, Va., weren’t arrested until the public forced the hands of the police to arrest them.

WWP deals with the issues that we have faced in life as a family, such as homelessness, discrimination, gentrification and homophobia. WWP helps to bring a voice to the voiceless.

I have always taught Takiyah to seek answers to issues on her own. Her perspective is vast because we have lived in various underserved communities throughout the U.S., such as Brooklyn, N.Y., Detroit, Atlanta and now Durham.

We also traveled in 2016 to see for ourselves the people of Cuba after a successful revolution and what a country ­without imperialism — that flourishes in spite of U.S. sanctions — looks like. We loved it and would like to do more travel internationally to learn from revolutionaries around the world.

My mind still races at the wonderment that Takiyah is. So I sat down with her to gather her thoughts.

Mikisa Thompson: What are you fighting for?

MT: How has your life changed since Aug. 14?

TT: There’s been a lot of ups and downs. I faced death threats, but also a lot of support from my comrades, family and the community. Since then, my belief in a world without white supremacy and capitalism has been steeled. I’m more optimistic than ever; sometimes I’m tired and weary but still very hopeful.

MT: Give me your vision of 2018, now that we are 100 years after the Russian Revolution.

TT: My outlook for 2018 is to continue organizing and mobilizing around this issue. … I’m about to go to trial for my alleged role in toppling the Confederate statue, and I just want to keep using court to further get my message out there and to talk about white supremacy and capitalism, how the two go hand-in-hand.

I’m hoping that more folks can understand the urgency of the moment that we’re living in and not be swayed by these midterm elections, with Democrats trying to convince us to drop everything — forget about racism, about sexism, about capitalism being at a dead end — and just vote for the middle path. You know, don’t vote for the middle path; you don’t get out of the road. Take a left.

MT: If you could time travel, who would you want to give you advice for how to propel the movement today?

TT: I can’t nail it down to one person. The people who I think of immediately are folks like Frantz Fanon, Gaddafi, Thomas Sankara.

Mao — people who are able to resist imperialism, because I think you know imperialism, as I’ve come to understand it. The struggle abroad is very much like the struggle here in the U.S. that Black people face, with gentrification and mass incarceration. A soldier’s very much the same as a police officer in their roles.

I think those folks all had excellent ideas about socialism and about how to resist the U.S. and the Western forces that want to control and dominate us.

MT: Do you feel that your actions have made an impact on society?

TT: I think my actions have made an impact. I was having a conversation the other day with someone and he talked about how a group of people in Austin, Texas, were picketing and protesting this Cat Cafe. Basically, you go inside and you can pet a cat and drink your coffee. But it’s in a neighborhood in Austin that was historically Chicano, and before the cafe it was a piñata store, so just the optics really helped rally the community.

And he’s talking about how, you know, this is kind of a useless protest and how the real issue should be with the banks, corporations and politicians who enable this kind of thing. But at the same time I think it’s important to understand the role of symbolism, and I think it’s true that people need symbolic victories.

The people of Durham allegedly took down the statue. It’s not a prison; we didn’t free everyone from the Durham County jail. But I think the symbolic victories are important in creating a world where racist symbols are not OK, so that we can start attacking the more structural relics of white supremacy.

Everyone has a role in the revolution. My role might not be dealing with banks and helping stop predatory lending or stopping the foreclosure of Black and Brown neighborhoods. But somebody’s role is going to be smashing windows at the Cat Café. If the revolution were to come tomorrow, we’re still going to need revolutionary chefs and revolutionary janitors.

I think my role has shown people that regular, everyday people can take a stand and do have a role in combating the ills that they see in society.

MT: How can everyday people get involved in activism in their community?

TT: I think the most important thing anyone can do is find an organization or a group, find something to dedicate your energy to.

I think about this Kwame Ture video on YouTube. He talks about the importance of being in an organization, and he says the system that we’re fighting against is highly organized — they have their courts, schools, media, their New York Times and Washington Post, right? We have to be just as organized if we hope to defeat that.

MT: What fuels your drive and determination for the Workers World Party movement as a queer Black woman in the U.S.?

TT: I want to try to leave a legacy on Earth. To create a world that is kinder and gentler for Black and Brown youth, for queer youth, for poor youth. I always say that I’m grateful for the movements that came before me and it’s important to be grateful and thankful, but also to acknowledge that we need more.

MT: What work would you like to do internationally?

TT: I would like to support all of the anti-imperialist social struggles around the world. I think one of the main places is Venezuela.

The gains that country has made since the Bolivarian Revolution have been important for Indigenous people, Black people, for women, for queer folks. I look at the National Constituent Assembly, and I’m really amazed and proud of the fact that so many different groups, so many different oppressed nationalities can be represented, and that Venezuela was able to execute an open election even in the face of U.S. imperialism and U.S. funding to ensure that it would fail. So I definitely would like to organize in Venezuela or interact with the Venezuelan people and the Freedom Fighters there.

MT: How can people help support you and your efforts?

TT: My PayPal is Paypal.Me/unrulybabyhair. I’m also @unrulybabyhair on Twitter. Also, my next court date is Jan. 11 in Durham. Please come out to support as well as call the district attorney to have the charges dropped.

MT: I’ve heard you say that you feel more free since your actions. Please ­explain.

MT: What do you think of Black Lives Matter and similar movements?

TT: Those movements are integral to ushering in an era of equality that is free from racial violence. We as leftists, socialists, communists and members of multinational organizations have to do everything we can to ensure those movements are sustained, to ensure a world that is free of white supremacy and ­anti-Black violence and racism. We have to support Black nationalist struggles in the United States.

We can’t allow those groups to be isolated, especially with the FBI labeling Black activists as “Black identity extremists.” The FBI has a long history of targeting, killing and imprisoning Black activists, so it’s absolutely necessary that any organization that considers itself socialist or seeking social justice should work hand-in-hand with Black Lives Matter and organizations like it.

MT: What is your opinion of Trump declaring Jerusalem the capital of Israel?

TT: I’m not surprised. The U.S. goal the last 20 or 30 years has been to dominate the Middle East for its labor pool and resources, mainly oil. I think Israel will be the U.S.’s outpost for policing the region, much like Colombia is the U.S.’s outpost in that region.

Floating around the internet was a speech from President Obama a few years ago talking about how Jerusalem is the capital of Israel. Trump is not the first person to espouse that view. It just falls in line with the U.S.’s need to spread capitalism. I’m keeping the people of Palestine in my heart and mind.

My poem to you for you …

Young warrior I see you

With your regal locked hair

You hear the drums as you climb those stairs

But don’t fret, he won’t choke

For they don’t want you, here to Palestine

Take your step for Sojourner because many were lost along the way….

Quick another step, don’t you turn back

The war is just beginning, the flame is at your feet

Young warrior you are not meant to be a sheep

Young warrior I see you.