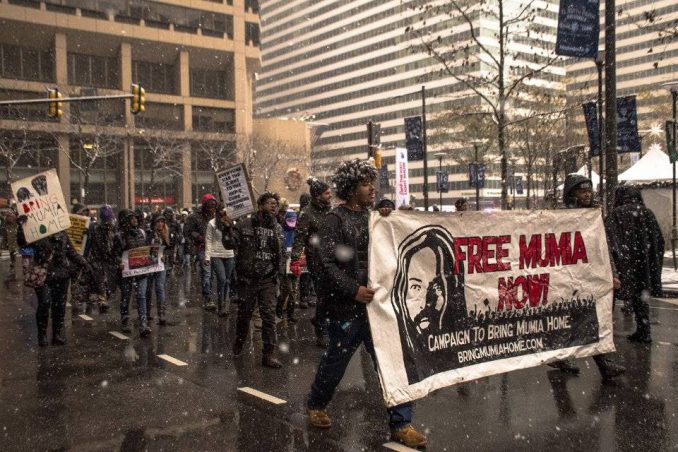 Philadelphia march for Mumia takes it to the streets, Dec. 9. 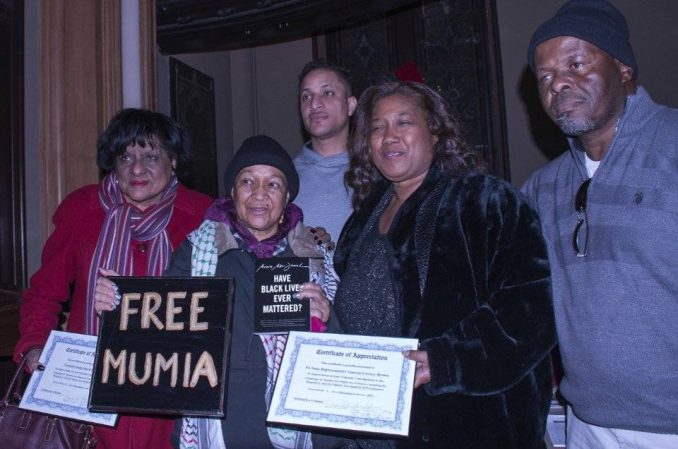 Philadelphia – “Have Black Lives Ever Mattered,” the title of Mumia Abu-Jamal’s latest book, was also the focus of Dec. 8 and Dec. 9 events here marking the 36th anniversary of his unjust incarceration.

The weekend started with a teach-in at the Church of the Advocate, as Pam Africa kicked off the program with background and updates on the case. Africa is chairwoman of International Concerned Friends and Family of Mumia Abu-Jamal.

Political activist and journalist Mumia Abu-Jamal was unjustly imprisoned and sentenced to death for allegedly killing a Philadelphia police officer in 1981. Abu-Jamal steadfastly maintains his innocence.

Thirty years later, in 2011, the global people’s movement forced the state to take Abu-Jamal off death row. Then the state re-sentenced him to life imprisonment without possibility of parole.

After Abu-Jamal was diagnosed with hepatitis C in 2015, the people fought for and won treatment for him. However, he still suffers from cirrhosis of the liver and a painful, severe skin ailment. For prisoners, life without parole is a death sentence, especially when denied decent health care.

With the assistance of the Pittsburgh-based Abolitionist Law Center, Abu-Jamal recently released a manual “to walk any person infected with hepatitis C through the obstacle course erected by medical staff and prison officials who seek to deny or delay” treatment.

Earlier many people from the teach-in joined a Center City demonstration for Palestine, where Pam Africa spoke on the need for solidarity between oppressed communities in the U.S. and the people of Palestine.

Taking it to the streets

Then protesters rallied outside the District Attorney’s office, demanding the release of all files pertinent to former DA Ronald Castille’s involvement in Mumia’s case. As a Pennsylvania Supreme Court justice, Castille refused to recuse himself from ruling on Abu-Jamal’s appeals. A 2016 U.S. Supreme Court decision, Williams v. Pennsylvania, was another death sentence case involving Castille. The court found that his refusal to remove himself was unconstitutional. In April 2017, Abu-Jamal’s attorneys filed an appeal for a new trial based on that decision.

Lawyer Gayle McLaughlin Bartholdi’s memo to Castille in the files, dated March 27, 1990, allegedly exposes the former DA’s direct role in the case. Common Pleas Court Judge Leon Tucker, overseeing Abu-Jamal’s appeal, ordered the DA’s office to show cause why it should not locate and produce Bartholdi to present testimony regarding her memo’s content. It’s one item in the documents that the DA’s office says it cannot locate. Tucker has ordered an evidentiary hearing for Jan. 17.

‘Mass incarceration A to Z’

The final Dec. 9 event was a forum on “Mass Incarceration A to Z.” Speakers included Akeem Browder, whose brother, Kalief Browder, unable to afford bail, suffered three years of abuse, including solitary confinement, during pretrial detention at New York City’s Rikers Island. Unable to recover from the impact of the abuse, Kalief died by suicide two years after his release. Browder is calling for the notorious prison complex to be shut down.

Panelist Greg Brinkley’s nephew, Kevin Brinkley, was imprisoned as a juvenile in 1977 for a crime he did not commit. He was repeatedly denied parole because he would not admit guilt. Due to re-examination of juvenile life sentences, Kevin is being released, but remains subject to parole despite recent prosecutor’s testimony acknowledging a cover-up of evidence of his innocence.

Writer and activist Marc Lamont Hill concluded the panel, discussing his own experience with the criminal justice system as a Black youth in Philadelphia and recounting being illegally stopped by police in New York. His credentials as a professor and a political commentator for CNN and FOX News did not give him immunity from police harassment.

A program highlight was the presentation of certificates of appreciation to Pennsylvania Rep. Vanessa Lowery Brown and Philadelphia Councilwoman Jannie Blackwell for their work in bringing attention to prisoners’ health care crisis, including suffering from contaminated water in prison facilities.