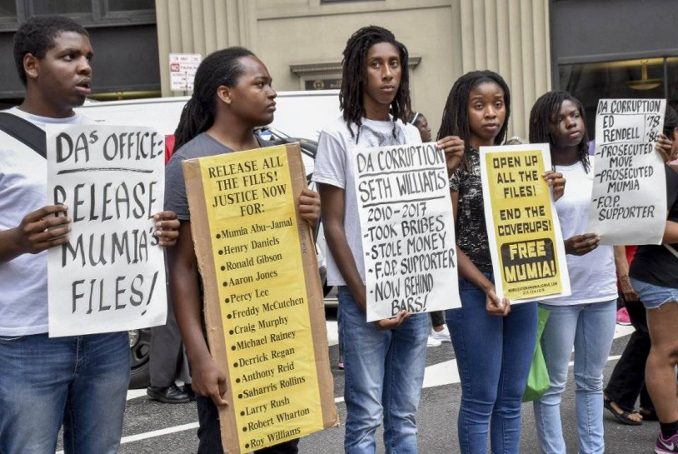 A number of supporters of Mumia Abu-Jamal and other community activists criticized the selection of Castille to a committee that features 15 other elected officials, city power brokers and attorneys (including noted civil rights defense attorney Michael Coard).

Some Krasner supporters are suggesting that it’s only his transition team, which includes people who will not necessarily be in his official administration, so it’s not that important.

There are many reasons, however, to ask what good could come from Krasner’s appointment of Castille.

Castille refused to recuse himself from ruling on Abu-Jamal’s appeal at the State Supreme Court level, even though the former Philly DA was instrumental in denying Mumia’s appeal years earlier. Mumia currently has a case under litigation, which could lead to his freedom, that hinges on whether a federal Supreme Court decision against such practices applies to him.

Castille’s inclusion on Krasner’s team gives a false impression that the former DA and justice is somehow progressive. This couldn’t be further from the truth.

While Krasner often stated opposition to the death penalty during his campaign, he chose Castille, who bragged during his election campaign for State Supreme Court in 1993 that he was responsible for putting 45 men on Pennsylvania’s death row.

Krasner campaigned that he would reduce mass incarceration, yet Castille boasted about strengthening state laws against drug trafficking, which more than tripled the conviction rate of local drug dealers. In other words, Castille contributed mightily to mass incarceration.

Castille and the state’s other DAs persuaded the Pennsylvania Legislature to approve mandatory sentencing for drug dealers — one of many state laws for which Castille took credit as legislative chairperson of the Pennsylvania District Attorneys Association in the late 1980s.

Castille asserted that he took on “every child advocacy group in the state” to push through a tougher law on juvenile crime. This law let police photograph and fingerprint youths arrested for felonies and gave the DA the power to veto judges’ decisions to send youths into probation-like programs. (Philadelphia Daily News, Sept. 25, 1989)

Krasner promised to end the civil asset forfeiture law; yet this law was actually written by Castille. The American Civil Liberties Union of Pennsylvania says that under this law, “[T]he government can legally take property it claims is connected to illegal activity but without actually charging, much less convicting, the property owner of a crime.” (aclupa.org) In Philadelphia, up to $1 million a year in cash is seized from innocent residents. (aclupa.org, June 2, 2015)

Krasner gained his reputation as a civil rights attorney willing to take on police brutality cases, but Castille is notorious for defending cops, no matter what they may be accused of. As Philly DA, Castille concluded that despite the deaths of 11 Black adults and children after the city bombed the home of MOVE, a Black liberation group, in 1985, there was insufficient evidence of criminal intent to justify a prosecution of any city officials.

More than 100 members of the racist Fraternal Order of Police attended Castille’s victory party in 1985. The organization had sent out 16,000 letters urging members to “bring their moms, their brothers, their sisters, their aunts” to the polls. Retired officers staffed telephones and drove 26 vans to deliver the message on Castille’s behalf.

The FOP named Castille FOP Man of the Year in 1986. (Philadelphia Daily News, Nov. 6, 1985) Unsurprisingly, Castille was named attorney for the state FOP in 1993.

The unconstitutional McMahon tapes, which train DA attorneys how to keep Black and Brown people off juries, were recorded during Castille’s term as DA.

On May 8, 2013, state Justice Castille wrote the opinion that allowed unnecessarily gerrymandered legislative districts for the next eight years in Pennsylvania, especially obstructing the voting rights of Black, Brown and poor communities. This practice in Wisconsin and other states is currently being challenged in the U.S. Supreme Court.

Krasner has the right to appoint anyone he wants to his transition team. But if he chooses to invite a former DA with a long history of supporting the death penalty, mass incarceration and the FOP, and of being anti-justice, the people have a right to raise questions. Many politicians have been elected after making many promises to voters, only to do an about-face once in office.

Krasner now has to answer what many people are asking: Is the appointment of Castille the first sign of compromise with Philadelphia’s racist power structure?