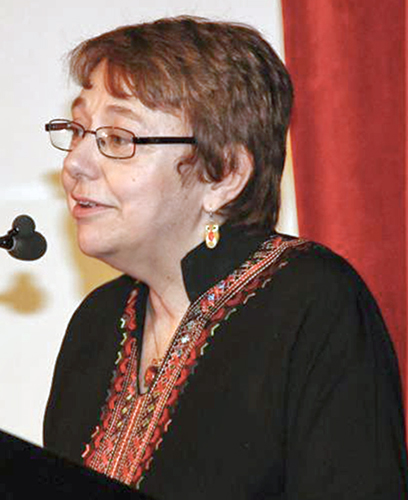 This talk was given on Nov. 19 at the Workers World Party national conference in Newark, N.J.

Who here is feeling a bit overwhelmed this weekend? Everyone here knows that we are living in a system that is in crisis. This capitalist system can’t solve its problems. And it is getting worse.

A hurricane in Puerto Rico or in Houston, a fire in California, a plant closing — and people are on their own for survival. There is no plan for an economic collapse or a natural disaster impacting millions.

It is the determination to fight for change that brings us to revolutionary activism. That is the first step. This is a determined group of militant fighters. I wish I could say that the future is rosy, that the path is straight.

We can only assure you that each militant here today is more secure in a political party than if you are on your own confronting state repression and trying to figure out a system based on chaos and intentional confusion. If you expect stability and that everything will go according to plan, we can’t give you that because the capitalist system is incapable of providing that to anyone.

Anchor in a storm

However, Workers World Party can be an anchor in a wild storm.

A report on social media about this conference said that more than 56,000 people viewed it on a live stream online. Some members have worked nonstop to fend off an unprecedented online attack to shut it down. Holding this conference takes organizing security on different levels.

We speak boldly and give confidence. We are not just talking to each other. We are talking to a wider audience that is hungry to hear about fightback, resistance and socialism.

But a repressive state apparatus and racist white supremacists are listening, too. If we take ourselves seriously, we always need to keep both audiences in mind. So we have to constantly make plans, project struggles and know when to spin on a dime and respond to crisis. We can’t predict what is coming at us — except war, austerity and disasters.

Training to be cadre

Our collective strength is one resource. Past struggles are another resource. Communist revolutions, communist parties’ experiences, and past and historic mass uprisings provide a rich history, worthy of study.

Revolutionary theory is a science. It can be studied and creatively applied. It is a science of showing solidarity on a working-class basis. Political theory provides the tools to understand national oppression and build unity as well as analyze the capitalist state and global imperialism.

Cadre training is never-ending. We are constantly learning how to contend with the crises this system, based on theft and duplicity, throws at us. This is why communists take up so many issues on so many fronts. The most important training is to answer every lie that capitalists throw at us with class truth.

If we don’t continually do this, then one social media hype or one fake nongovernmental human rights assault can blow us away. There is no such thing as a humanitarian mission carried out by U.S. imperialism. Whenever the media appears to speak with one voice, we need to be wary and ask, “What’s behind this?” Then we must prepare to stand our ground. Crises come without knocking politely. We are training so we are not caught off-guard.

Workers World Party has a consistent view. It is how we have survived decades of political upheaval worldwide. Our view is based on an analysis of the “Global Class War” — that there are two fundamental classes.

Eight people in the world own more wealth than half the planet’s population. Just four years ago, 80 billionaires had that amount. The capitalist concentration of wealth is criminal and extreme. The world’s population produces everything and owns practically nothing.

To protect this system of expropriation, of theft, the state apparatus has grown to gargantuan proportions. It has a gigantic military machine, a vast repressive police apparatus and prison system, and well-paid corporate media.

This dying system needs racism and other forms of divisiveness. It needs to fund the most reactionary ideas and fascist forces. U.S. imperialism has become more dangerous and more desperate in its decline.

What are the tasks ahead?

We must find the young workers and oppressed people who are looking for us, those who are determined to fight for a better world.

We must build a movement of unity and solidarity. WWP builds unity by consciously building solidarity with the most oppressed people, those most marginalized, isolated and ignored by society. We support and join struggles of African-American, Latinx, Indigenous, Asian, Arab, Muslim and LGBTQ and disabled people, immigrants, women and workers. We give voice and listen to the demands and needs of the most oppressed people.

It is a global war. We build solidarity with struggles and countries targeted by U.S. imperialism around the world: Venezuela, Cuba, Honduras, Zimbabwe, Iran, Yemen, Syria, Palestine, Afghanistan, north Korea, China and Russia. The African continent is under siege; in the past year, the U.S. carried out 3,500 U.S. military operations in Africa, 10 a day.

There is a continuing dialectic. As communists we need to plan our weekly newspaper, classes and meetings. We need to initiate our own campaigns, set dates and bring in allies. But in reality we can’t predict our agenda. We must be geared to responding to racist outrages, police crimes and new wars.

If you are feeling overwhelmed, embrace it! It is the new normal. We are training ourselves to overwhelm this racist, chaotic, dying system with organized peoples’ power. Dare to struggle! Dare to win!