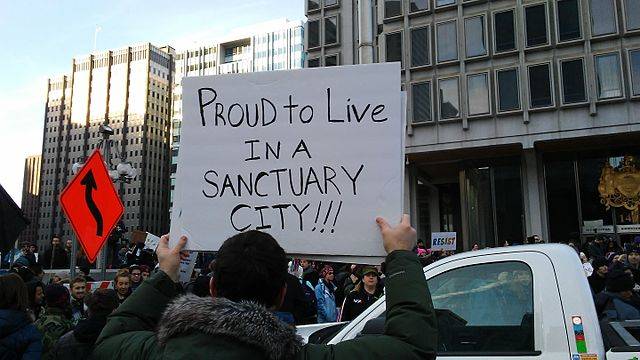 San Francisco — Furious, threatening tweets by #45. These were the president’s response to the Dec. 1 acquittal of undocumented migrant Jose Ines Garcia Zarate on murder and manslaughter charges in the 2015 shooting death of Kate Steinle. Trump had made this tragic accidental shooting a hallmark of his election campaign as a way to build support for his proposed U.S./Mexico border wall and his threat to deport immigrants.

The day after the acquittal, an editorial in the so-called liberal San Francisco Chronicle said that an inmate with Garcia Zarate’s record “could be released on the streets today,” implying that following sanctuary city policies would bring violence. The editorial didn’t explain what in this worker’s totally nonviolent record would make such a release a threat to the community.

In 1989 San Francisco was among the first U.S. cities to establish a sanctuary law as part of a national wave of local policies intended to help Central American refugees. (tinyurl.com/ybab8bum)

Trial testimony showed Steinle had been hit with a bullet that had ricocheted off a concrete pier. Prosecutors presented the jury with the choice of first- or second-degree murder or involuntary manslaughter charges. The defense argued that Garcia Zarate had found the gun under a bench on the pier and that it accidentally fired as he unwrapped it from a cloth. (The gun had been stolen from a federal Bureau of Land Management agent’s car several days before.)

The prosecution was unable to present any evidence of murderous intent or malfeasance on Garcia Zarate’s part. He was acquitted of the prosecutor’s charges and convicted only as a felon in possession of a firearm.

Garcia Zarate had been released by the San Francisco County sheriff several weeks before Steinle’s death, after marijuana possession charges against him had been dropped. That release went against a federal Immigration and Customs Enforcement request to hold him.

Trump’s tweets, in typical fashion, falsify information, claiming erroneously that Garcia Zarate was deported seven times as a violent felon. He had previously been deported five times, but had never been charged with any violent crimes. All charges against Garcia Zarate were drug or immigration related, with no suggestion of violence.

As Trump renewed calls to build his border wall, other tweeters pointed out the hypocrisy of boycotting San Francisco after Trump and supporters remained silent following the killing of anti-racist Heather Heyer during a white supremacist rally and counterprotest in Charlottesville, Va. (tinyurl.com/yb3hv2mh)

Despite recent brutal suppression of protest in Washington, D.C., anti-fascist, antifa counterprotesters showed up in twice the numbers. They shouted the right-wingers down with slogans like “Nazi punks, fuck off!” It took only 20 minutes before the Nazi and racist protesters, backed by a police escort, had to disappear. (tinyurl.com/y7l9nas)

Far-right-wingers have called two events on Dec. 16 under the pretense of “justice” for Kate Steinle and against sanctuary cities and the new California Values Act, SB 54.

That state bill, going into effect Jan. 1, 2018, mandates statewide limitations on local law enforcement cooperation with Immigration and Customs Enforcement. Counterprotests supporting sanctuary cities and SB 54 are in the works.

Kate Steinle’s death was a tragic accident. The use of this tragedy to foment anti-immigrant hatred is not only unwarranted, but deeply racist in character. No walls, no deportations, no bans!