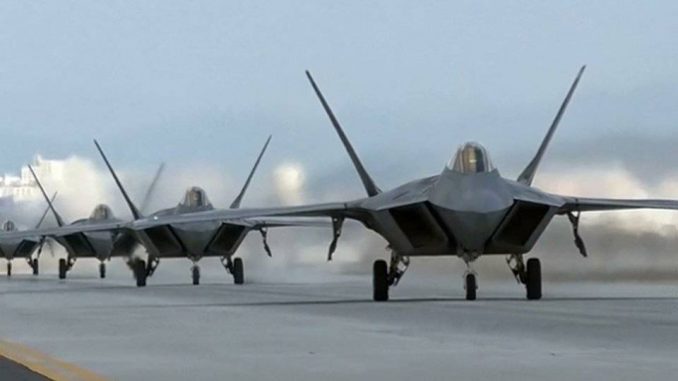 A potential crime of historic proportions is being openly discussed and evaluated in the U.S. imperialist media. They’re debating the pros and cons of whether or not millions of people should have their lives snuffed out in an instant, instead of immediately rejecting that possibility.

The “analysts” are discussing the nuclear destruction of the Democratic People’s Republic of Korea by the Pentagon. That there can possibly be “two sides” in such a discussion is itself a confession of how bankrupt this imperialist system has become.

The DPRK has declared it now has a reliable nuclear deterrent to any U.S. attack and has completed tests of both nuclear weapons and the missiles that could deliver them to targets in the U.S.

Despite this, the U.S. just carried out its most threatening war “games” ever, right on the border of the DPRK.

Many voices in the U.S. foreign policy establishment have recently admitted publicly that the DPRK’s nuclear program is motivated by its need for defense, and even cite the havoc the U.S. wreaked on countries like Iraq and Libya once they lacked the ability to retaliate. Yet voices associated with the Trump administration are calling for an increase in the threats, some even including an all-out war.

What kind of apocalyptic thinking breeds such a stance? Is it all bluster? They should already know that bluster does not work with the DPRK.

It should be noted that the People’s Republic of China takes these U.S. military exercises very seriously. An article in the People’s Daily of Dec. 4 reported:

“The DPRK foreign ministry spokesman said this drill would be unprecedented in its size and nature of simulating actual combat situation and have the highest number of U.S. major strategic assets including the F-22 Raptor and F-35 stealth fighters.

“ ‘The U.S. is publicly touting the objective of the drill as enhancing the actual combat capability to disable the DPRK’s major strategic bases in the early stages of war,’ the spokesman noted.

“He pointed out that Washington has just wound up a large-scale nuclear war drill against the DPRK which involved three nuclear-powered aircraft carrier strike groups. Such exercises are fueling the speculation that a U.S. nuclear attack on the DPRK is indeed possible and plausible.

“ ‘The Trump team is begging for a nuclear war by staging an extremely dangerous nuclear gamble on the Korean Peninsula,’ he said.”

In quoting the DPRK foreign ministry, China is sending a message to the U.S. warhawks.

What impels the U.S. rulers toward war?

At the end of World War II, the U.S. ruling class controlled the only nuclear arsenal in the world. U.S. productive capacity, virtually untouched by the war’s destruction elsewhere, amounted to 50 percent of the entire world’s gross domestic product. Its corporations could, and did, scour the globe in search of super-profits, with little competition.

Today, the U.S. is still the world’s biggest military power. But even as the ruling class here has enriched itself to astronomical proportions at the expense of workers everywhere, the relative economic strength of the U.S. has shrunk significantly compared to that of other imperialist countries — consider Western Europe and Japan — and also compared to that of People’s China, once home to hundreds of millions of peasants on the edge of starvation. Bloomberg News predicts China will overtake the U.S. in GDP within a decade.

The unbridled ideologues of the right, who this administration has moved to the top, would rather risk a holocaust than yield on their ambition to rule and exploit the world. But the DPRK, a small socialist country, has shown unparalleled courage in refusing to be pushed around.

That may strike fear into the hearts of the U.S. imperialist ruling class, but it should encourage all who struggle to build a world free of class and national oppression.