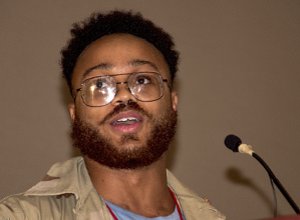 This presentation was given on Nov. 18 at the 2017 Workers World Party national conference in Newark, N.J.

We all know what a worker is, right? When most people hear the word “worker,” they imagine probably a scruffy-looking white dude in denim overalls with a wrench in his back pocket or some shit like that. Sure, lots of workers look like that. However, that is not an accurate representation of the working class. In fact, the majority of workers don’t fit that description at all.

What’s a worker? A worker, in the Marxist sense, is someone who sells their labor power for a wage, and does not own the means of production.

That’s most of us in this room.

But when we talk about workers, and the “working class,” we aren’t just talking about people with union jobs.

We believe that the revolution will be led by the most oppressed elements of society, because they have the least to lose and the most to gain.

When Brother Bobby and Brother Huey were organizing and recruiting for the Black Panther Party, one of the most advanced Black liberation movements in the U.S. to this very day, where did they go?

They didn’t sweep the university halls for philosophers. They weren’t looking around in coffee shops or in the suburbs for revolutionaries. They didn’t join leftist book discussion groups and form petty bourgeois academic cliques.

They went straight to the oppressed communities with the science of Marxism-Leninism, because they knew that poor Black folks were feeling the sharpest end of the blade of capitalism.

The Chinese revolution could not have happened without the peasantry, a disenfranchised section of the global working class.

Even the Russian Revolution required an alliance with the rural farmers, who would not be considered proletarian, to be successful.

There will be no revolution here, without two things.

And the second thing is understanding that the “lumpenproletariat” — part- time, non-union workers, non-legal workers, low-wage workers — are part of the global working class and necessary for the building of a revolutionary force against capitalism, imperialism and white supremacy.

Who has revolutionary potential?

I just learned that Barack Obama used to be a “Marxist-Leninist” in college. Plenty of liberals go through a “socialist” phase until they can afford to assimilate into the white supremacist capitalist machine. Look at how easy it is for these people to fall into neoliberalism and bourgeois reformism!

Mao said it best: “These people have their Marxism, but they have their liberalism as well — they talk Marxism but practice liberalism.”

Historically, the people with the most revolutionary potential are the people who, under no conditions, could gain anything from playing into the capitalist game of destruction.

I couldn’t imagine my broke, Black ass doing anything other than being in the struggle.

Everywhere I turn there’s a handful of oppression ready to smack me upside the head, to remind me of my place in this society. What the hell I look like acting like “It ain’t so bad”?

As if I haven’t seen, first hand, the results of capitalist exploitation of oppressed and nonconventional workers. I come from a family of fighters, a race of fighters, a class of fighters.

Imagine the revolutionary potential of a low-wage worker. Working three jobs under horrible conditions and abusive management, just barely making enough to support their family, and to feed themselves the next day.

Watching their water be shut off for petty delinquencies, while corporations rack up thousands of dollars in unpaid water bills, but go unpunished. They know what this system does.

Imagine the revolutionary potential of these hustlers and drug dealers and gang members, disenfranchised from society and the job market by the strategic dismemberment of their neighborhoods and families, and the police war on Black and Brown people. They know what this system does.

Imagine the revolutionary potential of every prisoner, unjustly imprisoned, tortured and exploited by the “justice system.” Denied health care, privacy, basic human rights. Humans, forced to live like pets under our oppressive state. They know what this system does.

Meet folks where they are, and have an understanding of the global working class. Understand that, no matter what, we have a responsibility to topple this rotten system.

We have to show solidarity with Black Lives Matter, BYP100 and any other organization of oppressed people fighting against this racist system. As a multinational, working-class, socialist and anti-imperialist organisation in the imperialist center, that’s one of the ways we operate.

We have a responsibility to our class and to the struggle to be in solidarity with any force fighting against capitalism and racist oppression.

But we must push our line on the global working class, because we know socialism is the answer, we know communism is the goal, and we know that the racist Republicans, the Democrackers and social chauvinists are out here, leading the people astray.

And through building class consciousness among the most oppressed, moving through the people like a fish through water, we will see the end of the oppressive, Western regime and the hyper exploitation of the people at home and abroad.

U.S. imperialism? Down with it!

Racist Cops? Down with them!

White supremacists? Down with them!

Capitalism? Down with it!